Good News for Moms and Babies: the Philippines Has Eliminated MNT

On November 29, the Philippines became the 44th country since the year 1999 to officially eliminate maternal and neonatal tetanus (MNT). This announcement leaves just 15 countries around the world still facing the threat of MNT, an excruciating and often fatal disease that affects mothers and newborns, usually through unhygienic childbirth and umbilical cord care practices.

MNT is entirely preventable: Just 3 shots can immunize a woman and her future children

Tetanus is acquired by exposure to the spores of the bacteria Clostridium tetani, which are commonly found in dirt. Mothers who give birth outside of hygienic health facilities and who have not received the benefits of immunizations are most at risk. Infants infected during or just after delivery suffer an agonizing death. Yet MNT is entirely preventable, through immunization and hygienic birth practices. A series of three shots can give a woman immunity not only for herself, but also for her future babies. 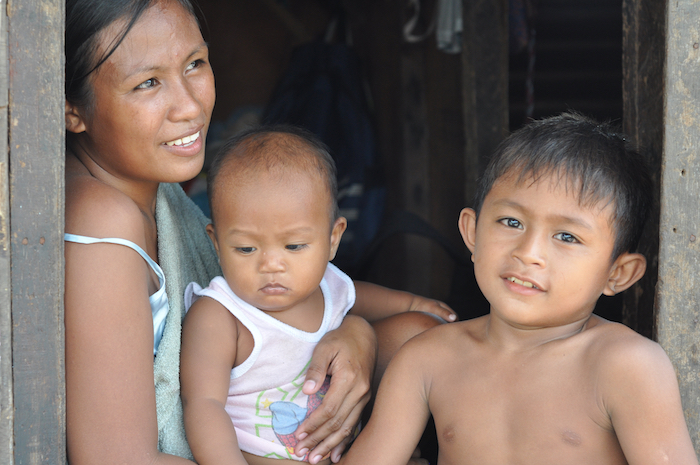 The education of pregnant women and birth attendants about safe and sanitary childbirth practices — often by UNICEF workers going door-to-door — helped to eliminate MNT in the Philippines. Mother of five Richelle Alcaraz, 25, sits at the doorway of her small home made of scraps of wood and sheeting with her youngest child, Jeffrey and her eldest child, Gerald. ©UNICEF Philippines/2014/Gay Samson

Most pregnant women in the Philippines have been routinely immunized for tetanus since the 1980s. In 2009, the government launched intensive tetanus immunization campaigns to reach all women of reproductive age, focusing on high-risk provinces. These efforts led to the World Health Organization declaring validation of MNT elimination in 16 of 17 regions in the Philippines in 2015. However, all regions or districts have to meet the elimination threshold for the country to declare elimination.

Armed conflict, bandits and geographic isolation complicated the fight against MNT in parts of the Philippines

The last remaining province, the Autonomous Region of Muslim Mindanao (ARMM), proved to be a difficult challenge. Geographical isolation, armed conflict, banditry and other security concerns, along with the region's autonomous government, made it difficult for health workers to reach all women living in this area with vaccines and health education. But UNICEF has a field office in the region, and a good relationship with the autonomous government, which allowed UNICEF and partners to conduct three rounds of tetanus vaccination campaigns in 2016 and 2017, reaching enough women of reproductive age — to lead to the successful elimination of MNT from the region, and the entire country. 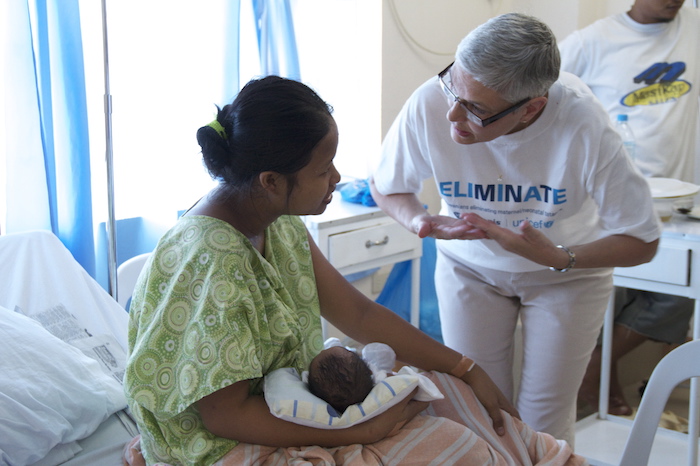 Lenora Hanna, Kiwanis International member, speaks with a new mother in the Philippines in 2010.

This achievement could not have been possible without the dedication and support of partners such as Kiwanis International, LDS Charities, BD and others. In 1999, when the World Health Assembly made the global elimination of MNT a priority, the disease still claimed the lives of newborns and their mothers in 59 countries. In 2010, the fight against MNT took a leap forward when Kiwanis International joined forces with UNICEF to help eliminate MNT by launching The Eliminate Project.

In 1999, MNT claimed the lives of newborns and their mothers in 59 countries; today, only 15 countries remain at risk

In 2010 and 2012, Kiwanis sent a delegation to the Philippines to see firsthand the work being done to fight MNT. Dr. Willibald Zeck, current head of UNICEF's Global Maternal, Newborn and Adolescent Health Program, was chief of health and nutrition in the UNICEF Philippines country office from 2012—2017, and remembers the trips well. 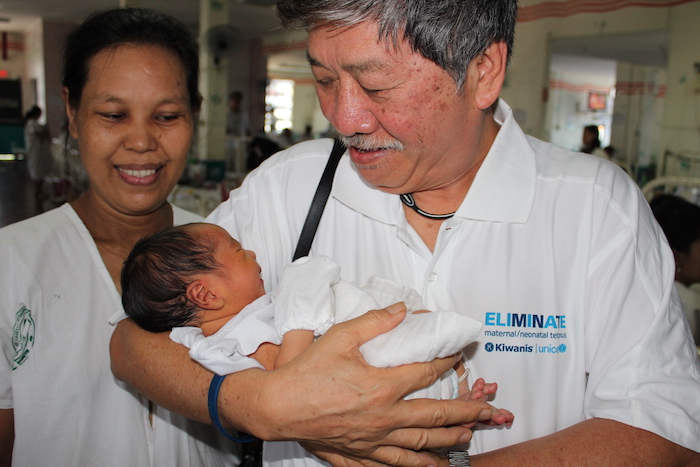 President of the Kiwanis Children's Fund Chia Sing Hwang holds a healthy newborn in the Philippines.

Dr. Zeck, a gynecologist who had a clinical practice in Tanzania before joining UNICEF in the Philippines, is no stranger to tetanus. In fact, he personally observed a baby suffering tetanus during his time in the Philippines.

"The case I saw myself — unfortunately, the baby did not survive. It was terrible. Tetanus seems to be one of the most painful states that you can be in as a human being. It's very hard to measure because we don't know how much newborns feel, but it's a terrible thing because tetanus causes muscle cramps all over. It's a very painful, terrible death."

Zeck assumes that the mother of this newborn had not been adequately immunized, and had most likely applied something to her umbilical cord — a common practice encouraged by the hilots, or traditional birth attendants, in the Philippines. The training and education of expectant mothers and health workers on proper health care and birthing practices has been a critical component in the fight against MNT. 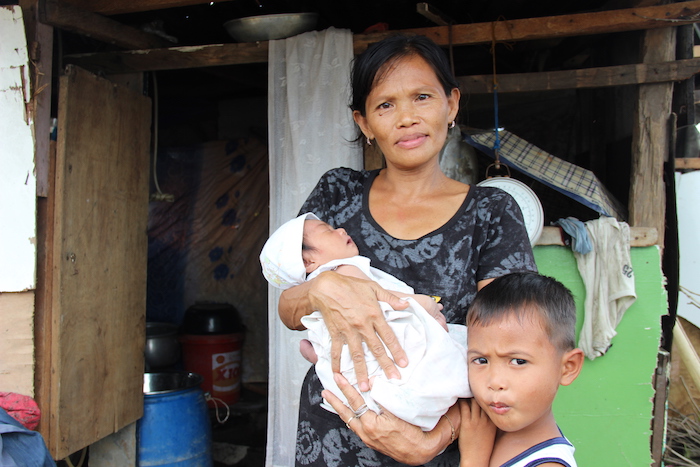 The elimination of MNT in the Philippines is a significant victory in the fight for child survival.

Geography and weather also posed challenges. "Some of the vaccination teams have to walk for hours, even days, to reach the vulnerable populations," says Zeck. "There are also typhoons. The Philippines have about 50 typhoons a year, and as the weather deteriorates, it becomes harder to reach the women. Typhoon Haiyan in 2013 was definitely a setback. But considering the scale of the emergency, I think our team did really well coming back from that and restarting the tetanus immunization campaigns." 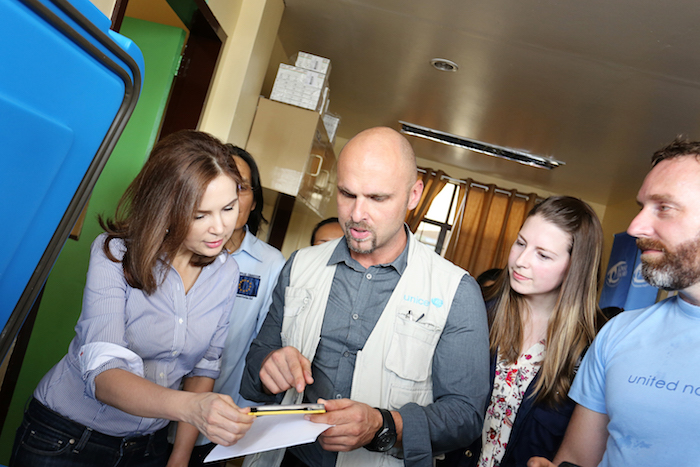 Kiwanis International, one of UNICEF's largest partners in the fight against MNT, sent a delegation of leaders to the Philippines even before The Eliminate Project officially began. Thanks to the support of partners such as Kiwanis International, the entire country is celebrating this major public health achievement.

"Now that we have eliminated MNT in the Philippines, the goal is to sustain this remarkable achievement," says UNICEF Philippines Representative Lotta Sylwander. "This is possible through a concerted effort to enhance access to quality antenatal care, skilled attendance at birth, and tetanus vaccination for all pregnant women, including those who live in the most remote areas of the country."

Donate to help save mothers and newborn babies from tetanus.

Top photo: With support from UNICEF, Kiwanis International and partners, health workers successfully protected mothers and newborns from tetanus in even the most remote provinces of the Philippines.