Star Wars: Force for Change's 2017 Omaze fundraising campaign gives you a chance to win an overnight stay at Skywalker Ranch, attend the premiere of Star Wars: The Last Jedi or visit the set of the upcoming Han Solo movie — all while helping UNICEF and Starlight Children's Foundation.

Lucasfilm and Disney have long leveraged the power of the Star Wars brand, using the Force for good to empower fans around the world through a charitable initiative called Star Wars: Force for Change.

In 2014, the first ever Star Wars: Force for Change fundraising campaign rallied millions of fans and raised $4.2 million over nine weeks to support UNICEF's Innovation Labs and related programs. UNICEF Innovation Labs develops cutting-edge, tech-based solutions for improving the lives of children around the world, including a drone-based delivery system for medical supplies and new digital tools that use data to fight disease.

This spring, Star Wars: Force for Change launched a new fundraising campaign that promises to build on that success while helping UNICEF provide lifesaving nutrition to children in need. Now through May 11, Star Wars fans can make a contribution at Omaze.com/StarWars for a chance to win one of three prizes: an overnight stay at Skywalker Ranch, an invite to the premiere of Star Wars: The Last Jedi, and a chance to be in the upcoming Han Solo movie. And one lucky Grand Prize winner gets chance to do it all!

It's a powerful bit of brand leveraging. This year, Star Wars celebrates its 40th anniversary. Star Wars: A New Hope debuted in U.S. theaters in 1977, introducing Luke Skywalker and Princess Leia to the pop culture universe. In the years since, new stories and characters have kept the franchise fresh, compelling and wildly popular.

That stratospheric fan enthusiasm extends to the collaboration between the Star Wars: Force for Change charitable initiative and UNICEF, helping to shine a light on the needs of vulnerable kids, and inspiring those fans to join the cause. Malnutrition affects nearly a quarter of the world's children and claims 1 million young lives every year. UNICEF works to deliver lifesaving nutrition to save those lives and protect children at risk, so that they may grow up healthy and strong. 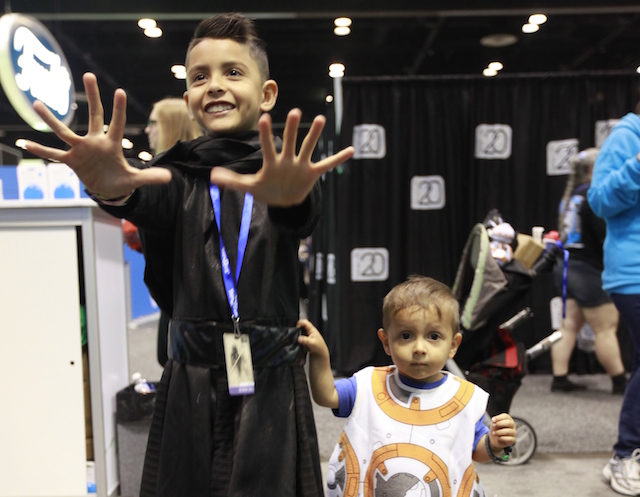 Kids get into the Star Wars spirit at a Star Wars Celebration in Orlando, Florida to help kick off the Omaze campaign benefitting UNICEF.

"I continue to be inspired by the incredible generosity and charitable efforts of our fans," Lucasfilm President Kathleen Kennedy has said.

In April 2015, Lucasfilm and Disney announced Star Wars: Force for Change would be a Presenting Sponsor for UNICEF Kid Power, a program that encourages American kids to get active and save lives. Kid Power team members get moving to earn points, which unlock therapeutic food packets that UNICEF distributes to malnourished children. So far, more than 4 million packets have been distributed as a result of the partnership, and $9 million has been raised to support UNICEF Nutrition programs around the world.

Be a #ForceForChange. Enter for a chance to win an epic Star Wars experience AND help UNICEF provide lifesaving nutrition to children in need around the world. Visit Omaze.com/StarWars for details.