Five Things You Should Know About Children in Iraq

Violence is destroying millions of childhoods in Iraq, devastating lives and futures. The UNICEF report, ‘A Heavy Price for Children’, highlights its effect on Iraq’s young people.

Update 7/5: Bombing In Baghdad Kills 175, Many Of Them Children

In the early morning hours on Sunday, a huge explosion rocked the Karada area of Baghdad, killing 175 people according to most recent counts. Dozens of children were among those killed.

UNICEF reiterates its call on all parties to the conflict in Iraq to protect children from violence: https://t.co/l8dH9CMF0q #Baghdad

A Heavy Price for Children

Escalating conflict is gravely affecting the children of Iraq, says a new UNICEF report, ‘A Heavy Price for Children.’  Below, five things to know about the tremendous challenges Iraqi children face, highlighted in the report.

Firas Ali Muhammed, 17, lost part of his right leg in a suicide bombing of Al-Shuhadaa Stadium in the city of Iskandariya. © UNICEF/UNI204058/Khuzaie

1. Children are being relentlessly and repeatedly targeted.

Some 3.6 million children, one in five of all Iraqi children, are at serious risk of death, injury, sexual violence, abduction and recruitment into fighting. This number has increased by 1.3 million in just the past eighteen months.

The bombing attack of a crowded shopping area in Baghdad early on Sunday has killed close to 200 people. The attack is the last in a chain of violent acts across Iraq for which children have paid their lives.

The country is reeling after decades of conflict, insecurity and neglect, and the impact on children worsens every day. One out of every 25 children in Iraq dies before reaching their fifth birthday. Only two out of five children has access to safe chlorinated water.  UNICEF estimates that 4.7 million children across Iraq need some form of humanitarian assistance — that’s about one-third of all children in the country. Ali, 8, and Amira, 5, (names changed) made a terrify journey across Iraq, Syria and Turkey to flee heavy bombing and fighting in Baji. Today they live in an unfinished home in the Kurdistan region of Iraq. © UNICEF/UNI204107/Yar

3. Children are terrified and under tremendous emotional strain.

Children are living in fear across the country. According to an assessment in Iraq's northern Kurdistan region, where many displaced find refuge, negative behavior changes were reported in 76 percent of children who fled their homes due to violence. 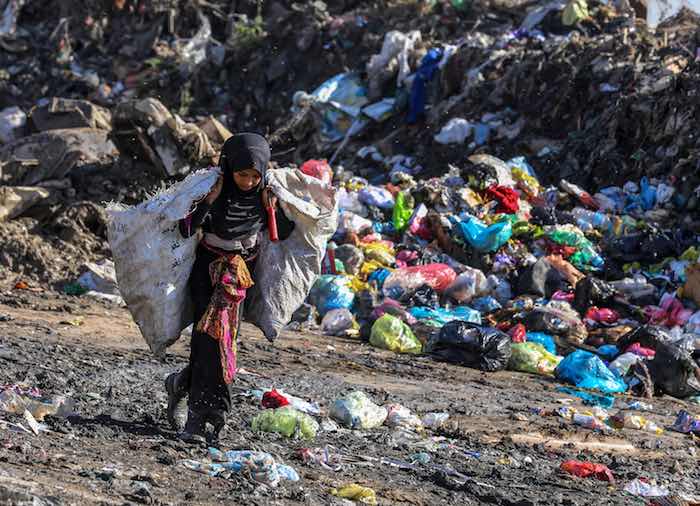 A young girl at a garbage dump in Baghdad carrying a bag of cans and plastic containers that she will later resell. ©UNICEF/UN020087/Khuzaie

4. Help is increasingly hard to get.

All areas of the country affected by conflict have had health services severely disrupted. Across Iraq in the past two years, the U.N. verified dozens of attacks on medical facilities and personnel.

Some hospitals and primary health care services reported a 50 percent increase in case loads — and health professionals often run for their lives, leaving services understaffed. More than a quarter of babies are born without access to medical care.

The effects of climate change have already ravaged Iraq’s water supply. Conflict is greatly exacerbating the crisis. Outside of cities, one in four children must make difficult and sometimes unsafe journeys to rivers and creeks, where the water is often unclean. Only one in ten children have access to safe drinking water from tanks or wells. 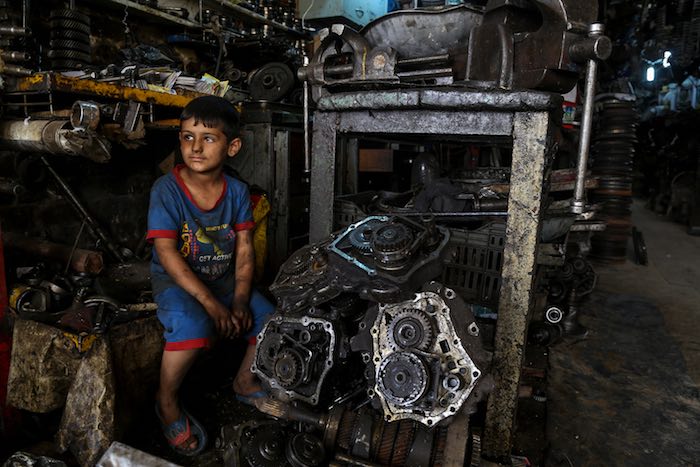 Mustafa, 6, works to support his displaced family — they fled conflict in Anbar — in an industrial area in Baghdad. His weekly wage is about USD $13. ©UNICEF/UN020101/Khuzaie

How can we help?

UNICEF has asked for $100 million to run programs needed in Iraq this year.

If children are to have a healthy and stable future in Iraq, unhindered and unconditional humanitarian access to all children in the country is a must. UNICEF and partners are committed to work to expand and improve education for children who are out of school, including through catch-up classes — and to provide programs that allowing children to heal and reconnect with their childhoods.

Read the report: ‘A heavy price for children: violence destroys childhood in Iraq.’

Noor fled violence near Mosul two years ago. She lives in a camp in northern Iraq. Watch her story: