Facing the Threat of Deportation, a Dreamer Speaks Out About DACA

The end of DACA could derail Cinthia Cantú's ambitious plans to serve her community and adopted homeland.

Nineteen-year-old Cinthia Cantú is one of nearly 800,000 children of immigrants whose fate hangs in the balance. Before they were old enough to make their own choices, they were brought into the United States by their parents. Their parents had many reasons for fleeing: extreme poverty, gang warfare, a crippling lack of opportunity. They did it to save their children's futures. Those children have since put down deep roots in their adoptive home. And, since 2012, their inclusion in the Deferred Action for Childhood Arrivals (DACA, or the Dream Act) has allowed these “Dreamers” to live full, productive lives in the U.S. without the threat of deportation.

On September 5, DACA recipients, now between the ages of 16 and 35, learned that they may no longer be protected. Heated discussions ensued from the White House to the Halls of Congress, from classrooms to family dining tables, and from delis to water coolers: What should be done about the Dreamers? The U.S. is their home. They’re attending school, going to work, building careers, raising children and plotting futures for the betterment of their families and their communities. Many, like Cinthia, have no memory of their country of origin. Yet they are now staring down the very real possibility that they will be expelled from the only home they have ever known.

If Congress doesn’t act to protect Dreamers, many will lose access to education and work, and they may be deported. Many families, like Cinthia's, will be torn apart because they are of mixed status, some family members documented, some not. In a 2015 online survey, a quarter of DACA participants said they had a child who is a U.S. citizen. What will become of these children if their parents are deported? What will become of the young people now striving to make the most of the chances they’ve been given while fearing it could all be snatched away?

Below, Cinthia Cantú tells her story Las piñatas! Always a kid’s favorite. Here I am at a friend’s birthday party as a little girl, celebrating and getting ready para cuando los dulces salieran!

I was only 1 year and 8 months old in 2000 when my dad called my mother to let her know that he had sent someone to cross us over from Vallehermoso, Mexico, to the U.S.

When my mother talks about taking the journey, she recalls, “It was a hard decision. In Mexico there was poverty and violence, and many children were forced to leave school and go to work.”

When my mother talks about taking the journey as a migrant, she recalls, “It was a hard decision." But she knew that if we stayed in Mexico, she’d be putting her children at risk.

My mother knew that if we stayed in Mexico, she’d be putting her children at risk. She wanted us to get an education, so we wouldn’t have to struggle under the sun like she did. Both of my parents’ childhoods were taken away at an early age. My mother was pulled out of school at age 9 to harvest corn and beans and clean sorghum. My father was in fourth grade when he was pulled out of school to work in a tire shop.

The American Dream is not easy, my mother always reminds me. Everyone arrives with the dream of prospering — but it's not easy to get a home. When we first arrived from Mexico, we moved in with an aunt in Houston, Texas. But as she also always says, this is a country where immigrants can work hard and prosper. And my parents did. Soon my mother got a job working in a daycare center, where she’s been for 14 years. My dad has worked endless hours, days, months, years to give our family food, water, shelter — and most importantly love.

The American Dream is not easy, my mother always reminds me. But as she also always says, this is a country where immigrants can work hard and prosper.

My parents wanted me to have a better future and, here in the U.S., I’ve been given the chance to build one. Unlike my parents, I got to stay in school.

And though I always knew that I was from Mexico and not the U.S., I didn’t mind, because I never saw a difference between me and the other kids.

In eighth grade, that changed. I started learning some of the differences. Kids were talking about needing a social security number to work, and saying that only people born in the U.S. had those numbers. I didn't pay too much attention because my dad was working hard and bringing bread to the table without that number.

My parents wanted me to have a better future and, here in the U.S., I’ve been given the chance to build one. Unlike my parents, I got to stay in school.

But then I entered high school, and I started learning about what it meant to be illegal and work illegally. I learned I could be deported to Mexico in a big white truck. I got scared.

That’s why when my mom told me about DACA, my heart almost exploded with happiness. We got really emotional because it meant I could be here with a permit to work. I could feel safe in this country.

I applied for DACA status and was able to graduate from high school without fear. I am now attending college, where through my volunteer and coursework, I’ve realized I want to pursue degrees in nutrition and environmental studies. My mother always tells me to respect the country that’s given me these opportunities. And I do.

I applied for DACA status and was able to graduate from high school without fear. I am now attending college. My mother always tells me to respect the country that’s given me these opportunities. And I do.

Freshman year, as a member of the Green Ambassador program, we planted fruit trees in our community. Due to the lack of available fresh food, our community is classified as a Food Desert. Four years later, we’ve planted over 800 trees — 300 of them fruit trees — and, in 2015, we won the National Abraham Lincoln Award, the only USDA award. I have mentored more than 300 students from elementary, middle and high schools. We did outreach, too, mainly to kids that live in poverty. Here I am harvesting kale at the Hermann Park Community Garden. I am one of the founders of this park, which provides organic produce to my communitiy, and have been helping there since Day 1. I was getting ready to make kale chips for community members and myself.

As for the future, I’ve always envisioned myself helping people who don't have what they need to take big steps forward. Our community suffers from obesity, high blood pressure, cancer and many other life-threatening illnesses. I want to teach my community about health and wellness so we can overcome these illnesses and stop the bad decision-making that passes diseases from generation to generation.

As for the future, I’ve always envisioned myself helping people who don't have what they need to take big steps forward.

But the end of DACA could be the end of these plans. When I heard this was a possibility, that I could be deported, my heart sank. I don’t remember Mexico. I have never been there. The United States is my home, and Houston is where I want to continue to put my energy. Just this past summer, I was privileged to intern for the Houston Parks and Recreation Department. I have worked so hard to get where I am. My ambitions are big.

I worry all the time that I will be left with no chance of succeeding in the country where I grew up. I comfort myself with these words: Ell pueblo unido, Jamás será Vencido! The people united will never be defeated! 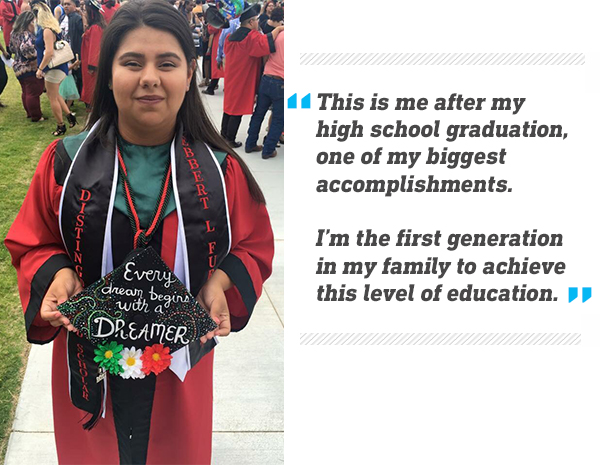 You can help open the door to a new safer future for Cinthia and the nearly 800,000 Dreamers like her: