Pandemic lockdowns and disrupted nutrition services are making it harder for children in Indonesia to stay healthy.

The COVID-19 pandemic is severely disrupting essential nutrition for children in Indonesia, worsening the ‘double burden’ of both under- and over-nutrition issues and increasing the risk of irreversible lifelong damage.

Undernutrition in children can result in stunting, the inability to reach one's potential for growth, potentially reducing a child's physical and cognitive capacity, or wasting, acute malnutrition resulting from rapid weight loss or the failure to gain weight.

Some children aren't getting enough to eat; others are getting too much of the wrong foods

On the other side, COVID-19 and its secondary impacts are also increasing the number of obese children. Obesity has been a growing concern over the past 15 years in Indonesia, with rates nearly doubling during that time. Locally know as 'gemuk,' child obesity is diagnosed when a child is significantly overweight for his or her age. Obesity increases the risk for noncommunicable diseases such as diabetes and cardiovascular issues.

UNICEF polls in August 2021 showed that nearly half of youth surveyed in Indonesia reported reduced physical activity compared to pre-pandemic times. A reported increase in fast-food consumption and unbalanced diets is another cause for concern. 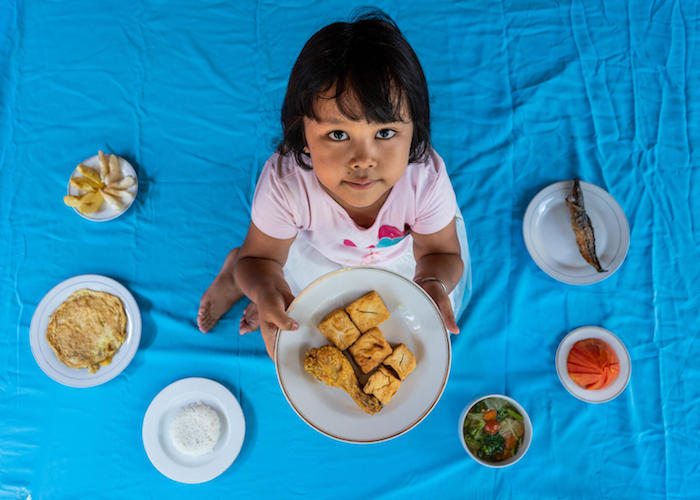 Helga, 5, holds a plate of fried chicken and tofu at her home in Pandes Village, Klaten, Central Java Province, Indonesia on September 7, 2021. © UNICEF/UN0517587/Ijazah

Two UNICEF reports, Fed to Fail? The crisis of children’s diets in early life and Towards a child-focused COVID-19 response and recovery, indicate that two major causes of deteriorating nutrition in Indonesia are changes to household income and disruptions to local health policy.

Due to a fall in income after the onset of COVID-19 containment measures in 2020, 66 percent of households reported worrying about food, an increase of over 50 percent in 2018. Households are reducing or halting the purchase of nutritious foods (such as fish, meat, poultry and fruit) and, instead, consuming less nutrient-dense foods.

As a result, young children’s diets are less likely to meet minimum dietary diversity. Children in Indonesia between the ages of 12 to 23 months meeting minimum dietary diversity fell by one-third from 81 percent in 2018 to 55 percent in 2020. UNICEF Executive Director Henrietta Fore states, “Poor nutritional intake in the first two years of life can irreversibly harm children’s rapidly growing bodies and brains, impacting their schooling, job prospects and futures.”

Not only are individual households facing issues of malnutrition, but government nutrition services have been halted. UNICEF found that more than three-quarters of Indonesia's provincial and district health offices shifted the budget for nutrition services to support the COVID-19 response. Additionally, about half the provincial and district health offices surveyed reported receiving inadequate or no supplies for treatment of severe child wasting.

COVID-19 has worsened food insecurity and wasting in Indonesia, increasing the risk of child mortality. UNICEF is providing technical assistance to the Government of Indonesia to improve food security, reduce child wasting and stunting by 14 percent before 2024, and administer COVID-19 vaccinations through COVAX.

UNICEF works in 130 countries to prevent all forms of malnutrition by improving children's and women's access to nutritious, safe, affordable and sustainable diets, and to detect, treat and care for malnourished children so they can recover and go on to live healthy and productive lives. You can help.