10 Years of the Syrian Conflict: Challenges & Success for Education

As the Syrian Arab Republic enters its tenth year of conflict and crisis, children continue to pay the heaviest price.

As the Syrian Arab Republic enters its tenth year of conflict and crisis, children continue to pay the heaviest price. On March 15th, UNICEF USA will mark this grim milestone, while maintaining hope that Syria’s decade-long crisis will soon end.

The situation in Syria remains one of the worst humanitarian crises in the world, with more than 11 million people in need of assistance within the country, of which over five million are children. Enduring hostilities are causing continued displacement, and the socio-economic effects of COVID-19 are significantly impacting access to basic services such as food items and safe water. Ongoing violence and danger persist, with a deep and lasting effect on the children of Syria. They have lost their homes, their schools and their communities.

With the crisis in its tenth year, there are an estimated 5.9 million Syrian children, including 2.8 million girls, in need of an education. 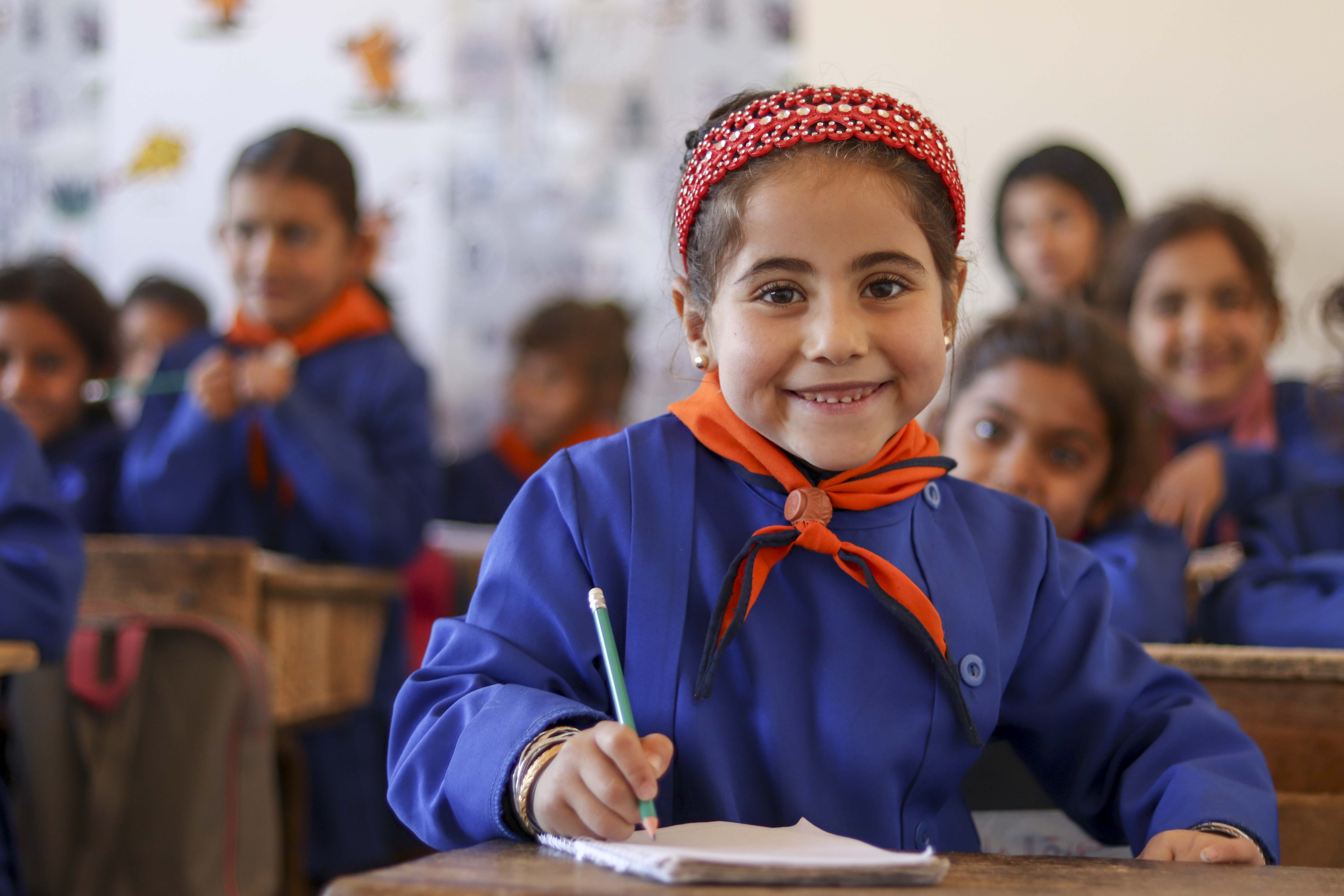 Catherine, 6, attends classes in Maskana, in Eastern rural Aleppo, thanks to rehabilitation by UNICEF through a generous contribution from Educate A Child. © UNICEF/UN0398889/Al-Issa

Every year since 2013, around one-third of school-age children in Syria have been out of school, and a whole generation of children have received inadequate education due to an overstretched and under-resourced education system. Since March 2020, COVID-19 has posed additional challenges for education in Syria including the closure of schools and learning centers, the postponement of formal education, limitations on movement between regions within Syria and the closing of international borders. Despite unspeakable devastation and unrelenting challenges, UNICEF has remained on the ground, helping to mobilize one of the largest humanitarian operations in history.

Education serves not only as a critical protection mechanism, but also as one of the most important resilience-building measures for conflict-affected children and adolescents, regardless of their age, geographic location or socioeconomic status. UNICEF has aligned its efforts with Educate A Child (EAC), a global program of the Education Above All Foundation, to address the needs of out-of-school children in Syria. The Self-Learning Program in Syria was established in 2015 as the flagship education program to respond to the needs of children aged 6-19 (Grades 1-9) out of school for more than one year or who have no access to formal education. By providing these  children  with environment that is conducive to learning, children who have missed out on regular schooling can continue their education and ultimately return to a formal school setting. 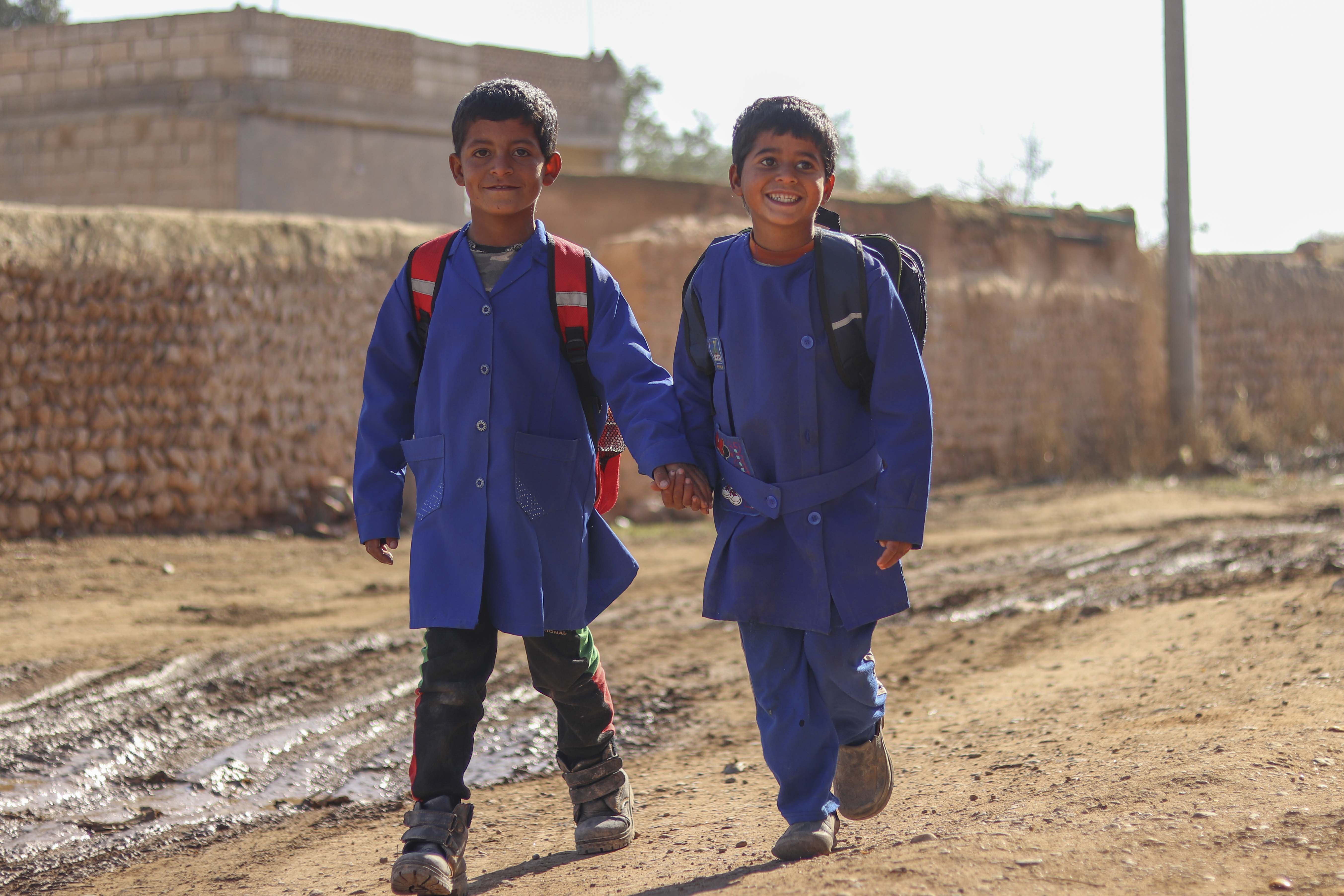 Siblings Ahmad, 6, and Hamza, 8, on their way to school in Maskana after surviving violence and displacement.
© UNICEF/UN0398892/Al-Issa

In three years, a total of 356,619 out-of-school children have enrolled in Self-Learning Program or Curriculum B activities across Syria: 97% of the four-year program goal.

Despite school closures due to COVID-19 in 2020, UNICEF and its partners accomplished the following:

9-year-old Maria follows a pre-recorded lesson on her father’s smartphone in a tent at the Kili IDP camp in rural Idlib. © UNICEF/UNI322056/Suleiman

For all these accomplishments, UNICEF USA’s Diaspora team has its partners to thank such as National Arab American Medical Association (NAAMA). Dr. Rouba Ali-Fehmi, the former President of NAAMA, Founder of NAAMA NextGen and current UNICEF USA’s Midwest Board member, along with her son, Omar Fehmi, National Co-President for NAAMA NextGen, have been instrumental in advocating for children’s rights in Syria and Yemen.

Since 2016, twin brothers Omar and Ziad Fehmi have organized an annual fundraiser “Keys for Syrian Kids” featuring a piano concert benefiting the Syrian children affected by the crisis.

This year, due to COVID-19, the event was held virtually and raised over $65,000 towards UNICEF’s Self-Learning program for children in Syria.

The Fehmi family, like so many NAAMA members, have a strong linkage to the Syrian Diaspora and children affected by the conflict. The event was a collaboration between NAAMA, UNICEF USA, American Syrian Arab Cultural Association and the Center for Arab American Philanthropy.

With the help of partners like NAAMA, there is the possibility that a generation of children growing up amid conflict will still have access to a quality education and hope for a better future.

Top Photo: Students from Aleppo, Syria, play during recess, in their school yard rehabilitated through a generous contribution from Educate A Child. The rehabilitation included infrastructure repair, full-scale painting, and the provision of desks, chairs, whiteboards, and water and fuel tanks.  © UNICEF/UN0398885/Al-Issa