K.I.N.D. Fund Provides Desks and Scholarships for Students in Malawi

For more than half of all students in Malawi, one of the world's poorest countries, school days are spent sitting on the classroom floor. Without desks or chairs, it's harder to focus, harder to write and harder to learn.

In 2010, UNICEF USA and MSNBC's Lawrence O'Donnell launched the Kids in Need of Desks (K.I.N.D.) campaign, to provide young learners with the simple furniture that can make such a difference to their academic success.

Since then, the program has benefitted more than 1.1 million learners across the country.

"I've never seen more joy in a school than the spontaneous outbursts of song and enthusiasm at a school in Malawi when the desks arrive," O'Donnell said in a recent MSNBC segment on K.I.N.D.

"The desks have an immediate impact of improving the learning environment," says Annie Maston, Girls' Education Officer at UNICEF Malawi. "Teachers in the targeted schools have reported improved participation during the lessons for both girls and boys, but more for the girls. Girls do not have to worry about standing up and sitting down again when answering questions, which can be challenging when sitting on the floor."

Schools with desks report increased attendance rates and higher retention among girls, who often skip school when they are menstruating, rather than sit on the classroom floor. Penmanship improves too — it's more efficient to write on a desk than on a paper balanced on a knee or spread out on the floor.

"For the teachers," Maston added, "the desks make it easier to move around the classroom when teaching and providing individualized support for each student." Desks are manufactured locally, creating jobs in the community

On Oct. 27, 2022, excited students gathered to help unload a shipment of new desks at Sotodwa Primary School in Chikwawa, southern Malawi. The desks were made at Mapanga Furniture Company, a family-run business that has been manufacturing quality furniture and student desks since 1964.

All K.I.N.D. Fund desks are made in Malawi, providing jobs for carpenters, welders and truck drivers. Mapanga alone has delivered nearly 50,000 desks to schools in southern Malawi with support from the K.I.N.D. Fund. 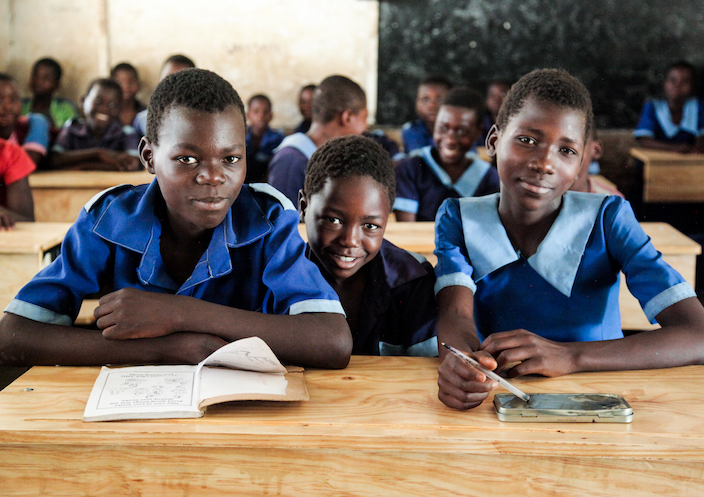 Primary school is free in Malawi but students must pay tuition if they want to continue on to secondary school. Less than half of the country's girls finish 8th grade. Families with limited resources are more likely to pay for a son's education than a daughter's; when girls do make it high school, their graduation rate is half that of boys. Out-of-school girls are often pushed into early marriage, depriving them of the chance to make decisions about their own lives and reach their full potential.

To help girls in Malawi stay in school and complete their secondary education, in 2012 K.I.N.D. began funding scholarships for girls whose families couldn't afford to pay tuition.

"Without this scholarship, I don't think I would have been able to continue with school," says 15-year-old Rashida, who finished eighth among 90 students in the most recent end-of-term exams at St. Monica Girls Secondary School in Mangochi district. With support from K.I.N.D. and her own hard work, Rashida is planning to become a doctor.

The K.I.N.D. Fund has raised more than $38 million to support children's education in Malawi. Your donation can help even more children get the most out of school, forging a path to a bright future. Please donate today.

Top photo: At Mkombezi Primary School in the Mangochi Region of southern Malawi, students are delighted to use their new desks delivered by Kids in Need of Desks (K.I.N.D.), a program started by MSNBC's Lawrence O'Donnell and UNICEF USA in 2010. To date, the K.I.N.D. Fund has provided more than 310,000 desks reaching 1.1 million learners in Malawi, along with scholarships to help girls complete high school. © Eldson Chagara for UNICEF USA