Hurricane Matthew: "The worst storm Haiti has seen in decades" 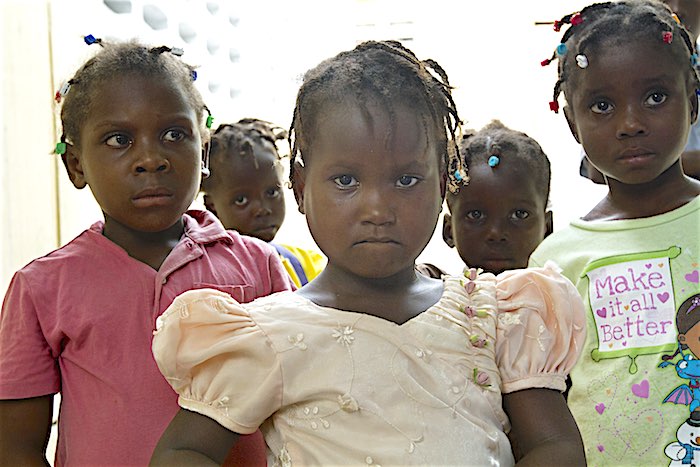 "In the storm's aftermath, the death toll [in Haiti] surged to at least 572 people on Friday, as information trickled in from remote areas previously cut off by the storm, according to a Reuters tally of death tolls given by officials. Some 61,500 people were in shelters, officials said, after the storm pushed the sea into fragile coastal villages ..." with casualities likely to rise further. Schools are closed. For many families, necessities are quickly dwindling.

With damage to the water and sanitation infrastructure, the risk of epidemics is very real. “Waterborne diseases are the first threat,” says UNICEF Haiti's Marc Vincent. “Our first priority is to make sure children have enough safe water.”

The storm slammed into Haiti yesterday bringing 145 mph winds, heavy rains and causing tremendous damage. Roads are blocked. Bridges have collapsed. Homes are destroyed. The number of fatalities is not yet known, but many people in coastal areas were not able to evacuate in advance of the storm. Across the country, thousands have been displaced. UNICEF teams are assessing the situation for families and children.

Cholera is endemic in Haiti and damage to the water and sanitation infrastructure puts children at increased risk of disease. UNICEF's first priority will be ensuring access to safe, clean water; and aid is already reaching children. Pre-positioned supplies sent before the onset of the storm are being distributed among affected families: water bladders, water purification tablets, hygiene kits and mosquito nets, but it is already clear that a massive amount of additional assistance will be needed.

Hurricane Matthew is now passing over Haiti where it represents a truly dangerous threat. The storm will dump heavy rains in the coming hours, increasing the risk of severe flooding, landslides, mudslides and homes collapsing.

UNICEF estimates that 6 million children are in the path of the storm in Haiti, Jamaica, Cuba and the Dominican Republic. UNICEF has activated its disaster response plans to ensure rapid lifesaving action for children and families.

#HurricaneMatthew winds in #PortAuPrince this morning. Video from our own Michelle Marrion, in #Haiti. pic.twitter.com/eJlWK4wXm7

As the full impact of Hurricane Matthew becomes clear in the next hours, UNICEF is prepared to take immediate emergency response measures in coordination with governments and other partners.

”This is an extremely dangerous storm and represents a great risk for the most vulnerable children of the countries in its path. Sadly, there will be many children that tomorrow won‘t have access to clean water, shelter, schools and the protection they have today,” says Maria Cristina Perceval, regional director for UNICEF Latin America and the Caribbean.

Matthew, which became the Atlantic’s first Category 5 hurricane since 2007, is still a powerful Category 4 storm carrying sustained winds of 140 mph, powerful enough to damage buildings and power infrastructure. The storm poses a severe risk to lives and property.

The impact of the hurricane will be felt in Jamaica, Haiti and Cuba today with hurricane conditions arriving tonight. Devastating winds, a destructive storm surge, severe flooding and landslides are very possible.

#Matthew made landfall near Les Anglais, Haiti at 7 am EDT. This is the first Category 4 #hurricane landfall in Haiti since Cleo in 1964. pic.twitter.com/0Ux7qriWBn

Get the latest updates on Matthew from the National Hurricane Center Atlantic Ops Twitter feed.

UNICEF is prepared to respond at scale with emergency relief

Our colleagues at UNICEF Latin America and the Caribbean, as well as in the potentially affected country offices, have been working around the clock in advance of the storm, monitoring its path and coordinating with emergency and disaster risk reduction staff in the event families and children require aid. UNICEF is prepared to respond at scale and has been coordinating closely with the Caribbean Disaster Emergency Management Agency.

Pre-positioned essential supplies are ready to be deployed from local warehouses and from the largest humanitarian warehouse in the world, UNICEF's Supply Division in Copenhagen. To respond to the damage that may be caused by a storm of Matthew’s severity, these supplies could include water purification units, medical supplies, therapeutic food and emergency generators.

A girl in Montego Bay, Jamaica, 1998. UNICEF has been working for children in Jamaica for almost 40 years.  © UNICEF/UNI33046/Alsbirk

Founded in 1946 to help children suffering in the aftermath of World War II, UNICEF provides children and families with disaster relief whenever emergencies strike. A disaster’s severity often depends on a community’s vulnerability. UNICEF works to reduce risks and increase resiliency by helping shape the choices children and their families make about about where they grow their food, how solidly they construct their houses, and even what they teach in school. This helps prepare for the worst, while hoping for the best.

With landfall on Jamaica and western Haiti imminent, and forecasts of up to 40 inches of rain in the most intensely hit areas, UNICEF's preparations are becoming more urgent by the hour. Make a secure donation now to make sure UNICEF has the support it needs to protect children in emergencies.