The Coronavirus Pandemic Through a Child's Eyes | UNICEF USA

Coronavirus, Seen Through a Child's Eyes

Life in the time of the novel coronavirus is full of uncertainty for children. In the relatively few pediatric cases reported thus far, symptoms have been mild. But when family members test positive for COVID-19, a child's life can be turned upside-down.

Five-year-old Yuanyuan* was left on her own in Wuhan, China when her parents and grandparents became too ill to care for her in February. Most of the city’s hotels were shut down, so the hospital vacated a room for Yuanyuan and a volunteer, who helped keep her company. Hospital staff provided regular meals and taught her how to protect herself from the virus. Below, Yuanyuan's mother describes the family's ordeal, and the bravery of a little girl who found herself all alone in the midst of a global pandemic. 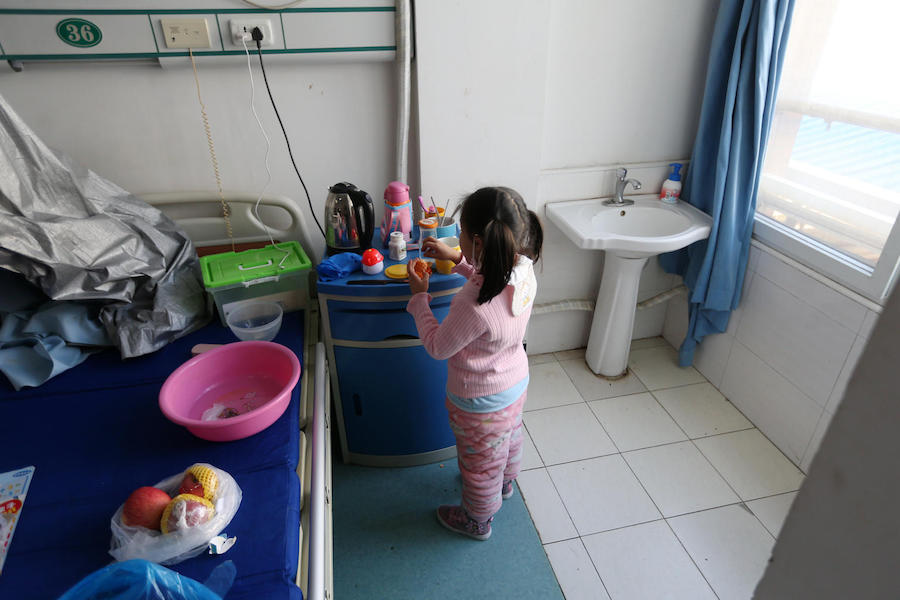 What were your first symptoms? Did it occur to you at the time that you might have COVID-19?

My husband and I had a fever first, before the grandparents became feverish too, toward the end of January. My husband worked in a supermarket where we suspected he became infected. We stayed at home after that. Initially, we thought it was just a common cold, because our symptoms were not that severe then. However, when both of Yuanyuan’s grandparents fell ill and Grandpa was in critical condition, I became alarmed and reported to the residential community. We went to the hospital to get tested and were confirmed infected. Back then, there were not enough hospital beds, so we went back home for self-quarantine. Grandpa passed away at home on February 9.

While we were waiting at home for hospital beds, my worst fear was that Yuanyuan might get infected by us. So, we had her stay alone in one room for isolation and wouldn’t allow her to have any physical contact with us. My heart was ripped apart during those days and I was on the brink of breakdown. But Yuanyuan was so strong and cooperative. She didn’t cry and she showed so much understanding. 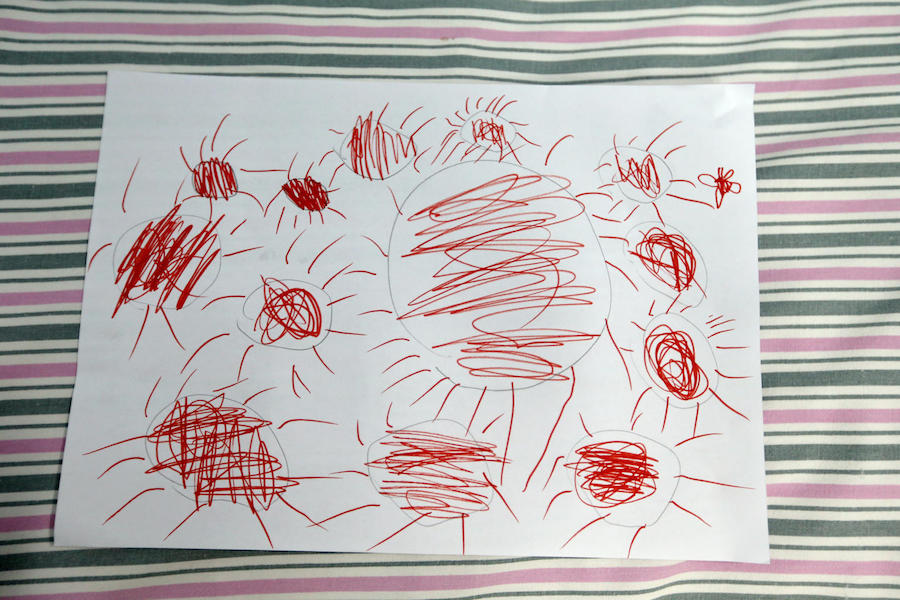 Five-year-old Yuanyuan's drawing, above, depicts a cluster of novel coronaviruses orbiting the sun. “These are viruses. The sun is scorching them,” she says.

What happened after you were sent to the hospital?

On February 11, we were hospitalized, and Yuanyuan was sent away in the care of a female community volunteer, thanks to the local government arrangements. I had never been separated from my daughter, not even one night.

At first, I was so worried that I didn’t dare have a video call with her – what if she saw me and asked why Mommy wasn’t with her? What was Mommy doing? It was hard to explain to her. I worried how she would cope with the new environment alone. The volunteer has been kind enough to send me videos and photos of her every day. I trust that the volunteer is taking good care of her, so it’s a relief.

I was also worried about her health since she had been in close contact with us. Her CT scan showed her lungs were all right, I was thrilled to learn. I wouldn’t know what to do if she were infected. She’s been healthy the entire time during the quarantine period.

Days later, I started calling her when I was feeling better after treatment. I asked what she was doing. I told her to eat well and listen to the volunteer. I didn’t dare ask if she missed me. I was afraid she wouldn’t be able to hold on anymore if I asked. 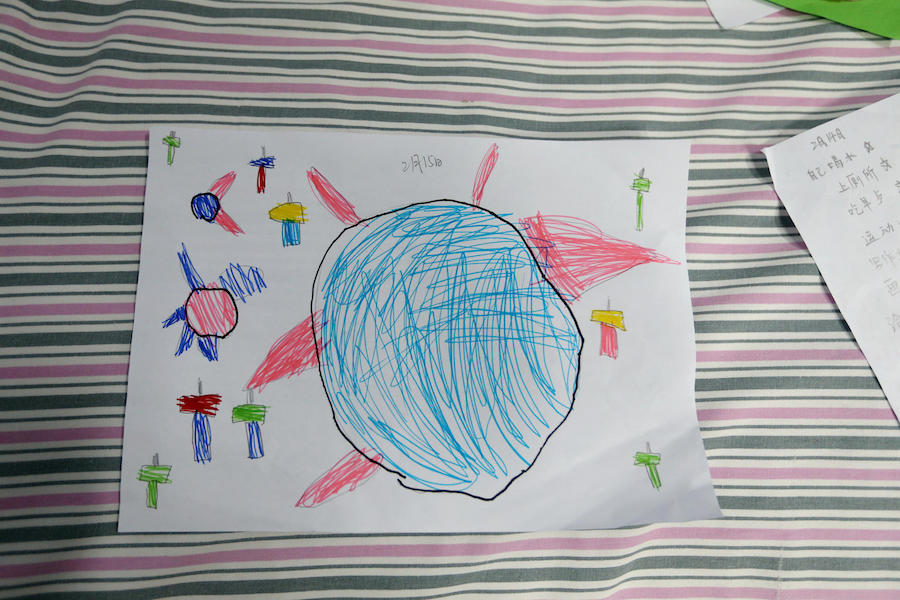 Another of Yuanyuan's drawings shows the novel coronavirus surrounded by hammers. “This is a virus, and these hammers are striking it,” she says.

She’s doing well. She enjoys the company of the volunteer. She draws, writes and plays some games during the day. She also takes a nap every day after lunch. She’s good as long as someone plays with her. I feel like she has grown up a lot and has become more understanding these days, but I will make sure I tell her why we have to go through this separation when we reunite.

Does Yuanyuan understand what is going on?

She knows we are sick and it’s contagious. She doesn’t know her grandpa passed away. She sometimes asks for him. I told her Grandpa stayed in another ward, so we couldn’t reach him. Then I tried to change the subject. I want to wait until she’s older [to tell her]. I wonder if she will be less impacted by his death as time passes. Her memories about her grandpa might fade away, along with the horrors of this epidemic. Maybe it’ll be better when she’s older. She’s just a kid now. 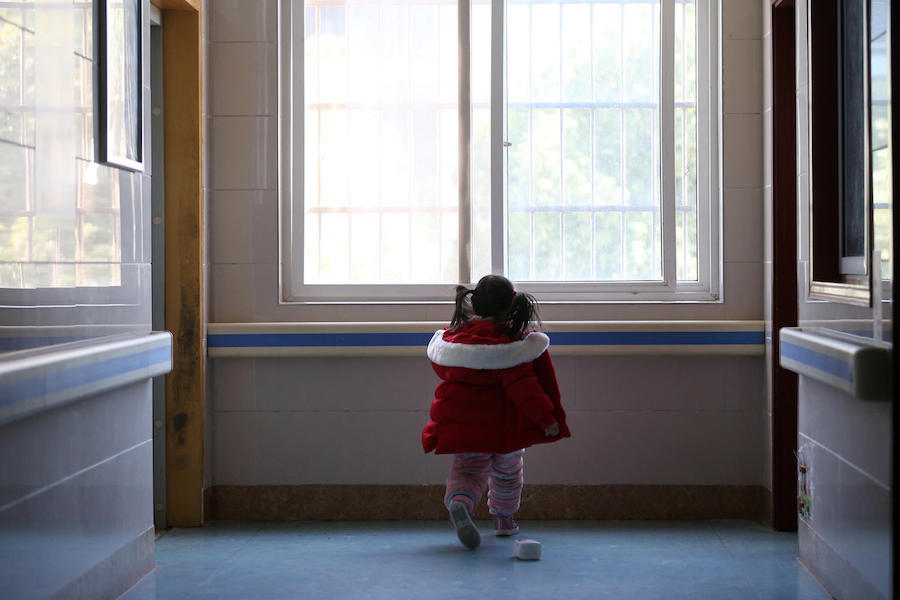 What is it like in Wuhan right now? What emotions are people experiencing? What does daily life look like?

I’m happy to see the number of new cases has dropped in Wuhan. Maybe this will come to an end soon. I have received good care in the hospital and in the quarantine hotel. Doctors conduct daily check-ups in the morning and give us traditional Chinese medicine to help with recovery. We get three meals a day delivered to our room. I am half positive and half concerned. I’m concerned because there are so many unknown things about this virus. I saw on the news that someone got sick again after being cured. I hope it does not happen to me.

People in Wuhan have been confined to their homes for a long time. They are afraid of getting infected but being confined can be suffocating and very dull.

Did Yuanyuan share any stories about her stay in the hospital?

On March 8, International Women’s Day, she made a paper dress for me. The volunteer sent me a photo of her holding the dress. I didn’t recognize it was a dress. I asked what it was. She said, "I made you a dress Mommy, and some little gifts in a box." I asked what they were, she said, "It’s a secret." I told her to remember to bring them back home. I was very touched. When I see my child, all I want to do is to hug her and tell her I missed her.

[The family has not yet been reunited. Yuanyuan's parents and grandmother are still under quarantine, pending the discharge notice from health authorities.]

Your gift will help UNICEF be there for vulnerable children around the world during the coronavirus global public health emergency.

Wondering how to talk to children about COVID-19? See Coronavirus & Children: The Complete Guide

Top photo: Five-year-old Yuanyuan* (her name has been changed to protect her privacy) was the only member of her family not infected with COVID-19 after the novel coronavirus swept through Wuhan, China. Medical personnel in the hospital decided to look after the girl, and a volunteer helped keep her company. All photos © Meng Cui for UNICEF