Children Killed and Injured Amid Escalating Violence in Sudan

A military backlash against pro-democracy protesters poses yet another lethal threat to a nation of children suffering from decades of conflict and deprivation.

At least 19 children have reportedly been killed in Sudan and another 49 injured since a military crackdown on peaceful protests began earlier this month.

“We have received information that children are being detained, recruited to join the fighting and sexually abused,” UNICEF Executive Director Henrietta Fore said, calling for an end to the unrest. “Many parents are too scared to let their children leave the house, fearful of violence, harassment and lawlessness.”

Tensions increased in April after the military overthrew the nation’s president, Omar Hassan al-Bashir. Initially, the toppling of the autocratic ruler sparked hope as the ruling transitional military council and civilians began talks over a peaceful transfer to democratic rule.

On June 3, military and opposition forces opened fire on protesters demanding a transition to a civilian-led government during a sit-in in Khartoum, Sudan’s capital, killing an estimated 31 people and injuring hundreds; news reports contained doctors' accounts of protesters who were raped. Amid escalating violence, health workers have been attacked. Schools, hospitals and health centers have been targeted, looted and destroyed.

“I am gravely concerned at the impact of the continuing violence and unrest in the country on children and young people, especially the reported use of excessive force against peaceful protestors,” said Fore. “Water, food and medicine shortages have been reported across the country, putting children’s health and wellbeing at risk."

Sudan’s children have suffered through decades of conflict and displacement, underdevelopment and poor governance.

"The current violence," warned Fore, "is making a critical situation even worse." 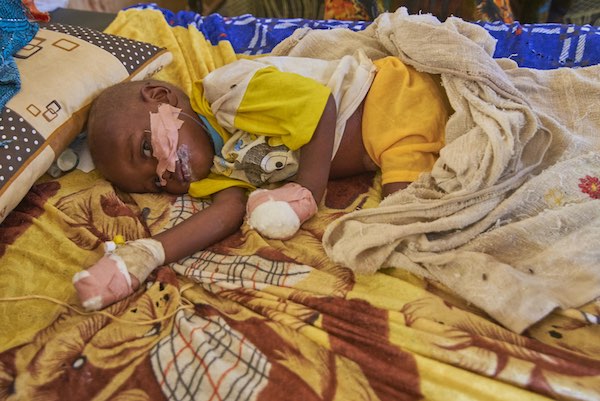 This child is being treated for malnutrition at a hospital in Sudan, where food insecurity is widespread. This year, UNICEF will treat 300,000 children under the age of 5 who are suffering from the most severe form of malnutrition with Ready-to-Use Therapeutic Food. © UNICEF/UN0281540/

Some 2.4 million Sudanese children are malnourished. Roughly 3.3 million people urgently require the water, sanitation and hygiene support that is so critical to preventing disease outbreaks. The economic crisis that gripped the nation in 2018 has put basic goods, including food, out of families' reach, pushing even more children to the brink and rendering formerly self-reliant communities dependent upon support.

Here's what UNICEF is doing to help

“Even in the face of this unrest, UNICEF’s work for children in Sudan continues," said Fore. "We are providing millions of children, including those who have been displaced or are refugees, with vaccines, safe water, treatment for severe acute malnutrition and psychosocial support."

This year, with your support, UNICEF can continue providing lifesaving support to Sudan's children by:

UNICEF is calling upon all involved to protect children's safety and their rights at all times.

“Any attack on children, schools or hospitals is a grave violation of children’s rights,” Fore continued, issuing an appeal to Sudan's authorities to allow humanitarian organizations access to hospitals that have been off-limits or closed so that they can help those in need. “The children of Sudan want peace. The international community needs to take a firm stand in support of their aspirations.”

Top photo: Schoolgirls peer through a window at a UNICEF-supported primary school in Sudan's Kassala state in February 2019. © UNICEF/UN0284073