Advocacy Day - A Day for a Cause | UNICEF USA

Advocacy Day - A Day for a Cause

Advocacy Day is an opportunity for ardent UNICEF volunteers from across the United States to gather on Capitol Hill, not only just to meet and greet their Members of Congress but also to passionately advocate for UNICEF and the impact the organization is making around the world. This year the event was held on April 4, 2017, and we had the opportunity to represent the New Jersey team on the Hill. It was indeed an honor to represent an organization that has been a beacon of hope for children for the past seven decades.

We had five members from UNICEF USA represent the State of New Jersey where we all live. Our goal was to discuss issues that are important to us and ask for support of Members of Congress to maintain the full $132.5 million voluntary U.S. Government contribution to UNICEF in Fiscal Year 2018. Since we were a relatively small group, each individual had a crucial role to play while meeting with Congressional Offices. Our initial meeting was with Dylan Sodaro, who is the aide to Rep. Bill Pascrell, Jr. (D-NJ). Since it was our first meeting of the day, we all were a bit nervous and mechanical, but Dylan was kind enough to listen to us and to receive our request for appropriations filing. Our team reflected on the meeting and discussed ways we could improve, which prepared us for our next meeting with Rep. Leonard Lance (R-NJ) at his office. We were even able to grab a photo with him!

It was a real treat to meet with Rep. Rodney Frelinghuysen (R-NJ), who is the Chairman of the House Committee on Appropriations, and his Senior Policy Advisor, Steve Wilson. The team had a very productive meeting with the Congressman and was impressed by his kind attention during the meeting. The office’s willingness to listen and then offer their own perspectives was tremendous. Rep. Frelinghuysen expressed his support of UNICEF and the organization’s activities around the globe. The Congressman was even quick to Tweet about our meeting with him, even before we left his office! 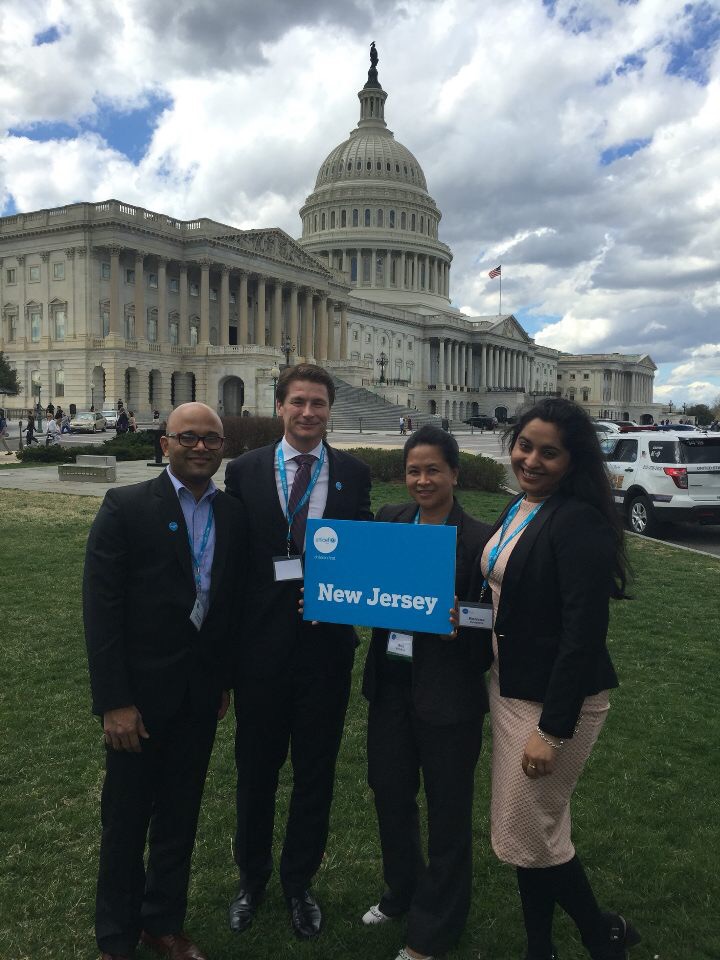 The team also had meetings with Rep. Josh Gottenheimer (D-NJ), as well as aides of Rep. Bonnie Watson Coleman (D-NJ), Rep. Donald Payne, Jr. (D-NJ), and Sen. Cory Booker (D-NJ). In all the meetings, the New Jersey team was able to convey the impact made by UNICEF at global and grassroots levels, and Congressional Offices were excited to learn about initiatives like UNICEF Kid Power. After making our appropriations asks, the team made sure to leave behind a kit of materials with each Congressional Office that included a draft appropriations request.

The entire day was an incredible experience, one which for us was epitomized by the energy, knowledge, and passion of our teammates, but also by all the broad bipartisan support and engagement of the Members of Congress and their staff members with whom we met. By the end of the eventful day, the New Jersey team emerged as an experienced group of advocates who could conduct meetings with Congressional Offices with clinical precision. It was a day well spent and the team left the Capitol with the feeling of making the world a better place by supporting and advocating to put #childrenfirst.