The Let Us Learn program in Afghanistan focuses on increasing student enrollment and retention amongst girls and out-of-school children. Some 20,000 children have benefitted from Let Us Learn Afghanistan since the program began in 2011.

For girls in Afghanistan, seeking an education is an act of courage

More than 4 million children are out of school in Afghanistan — more than half of them girls, many living in hard-to-reach areas and conflict zones where there is no formal education available. Girls who seek an education or career in Afghanistan are often persecuted. Denying girls an education puts them at risk for early marriage and pregnancy, forced labor and other forms of exploitation and abuse.

Since launching in the country in 2011, the initiative has created hundreds of community-based schools — some in community buildings or houses, others in mosques — benefiting tens of thousands of students. Teachers also receive training, learning materials and other support needed to create child-friendly learning environments.

Accelerated Learning Centers are also provided for children who have missed out on years of schooling, allowing students to complete primary grades 1-6 in just three years. 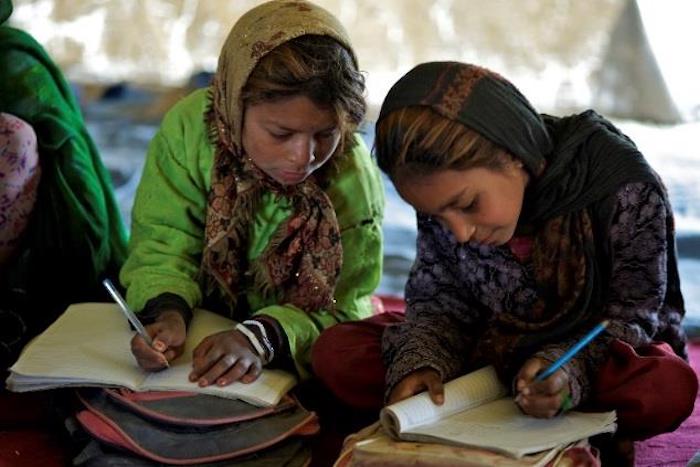 Two girls concentrate on their school work at a community-based school in Afghanistan. ©UNICEF

At a time of intense political and social instability in the country, UNICEF continues to urge development partners to support education for all children in Afghanistan, so that the education gains of the past two decades — including a tenfold increase in student enrollment, from 1 million to 10 million, and a threefold increase in the number of schools, from 6,000 to 18,000 — are strengthened, not rolled back.

UNICEF will continue to advocate with all actors so that all girls and boys have an equal chance to learn and develop the skills they need to thrive and build a peaceful and productive Afghanistan. — former UNICEF Executive Director Henrietta Fore.

Learn more about Let Us Learn in other countries.

Help UNICEF make sure vulnerable children have access to an education. Your support can make a difference.