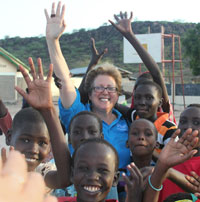 Caryl M. Stern is the President and CEO of UNICEF USA. Stern is an activist, author, executive, public speaker, mother of three and grandmother of two. A dynamic change-maker, Stern has dedicated her career to helping others through education, compassion, advocacy and rolling up her sleeves. Since 2007, she has served as President and CEO of UNICEF USA, an organization that supports UNICEF’s lifesaving work to put children first.

Under Stern’s leadership, UNICEF USA has more than doubled its fundraising revenue, secured multi-million dollar commitments in support of the world’s children and launched UNICEF Kid Power, the world’s first Wearable-for-Good™ that empowers kids to get active and save lives. Stern has traveled to more than 30 countries in support of UNICEF’s work and has spearheaded the organization’s emergency relief efforts for children affected by disasters, including the 2010 Haiti earthquake, the 2011 East Africa drought, the Ebola and Zika epidemics and the ongoing global refugee and migrant crisis.

A sought-after public speaker on the topics of Kids helping Kids, children and philanthropy, anti-bullying and international development, Stern was invited to present at the White House’s inaugural summit on The United State of Women and was named one of "25 Women Changing the World in 2017" by People Magazine, “20 Most Influential Moms of 2017” by Family Circle, “25 Moms We Love” by Working Mother Magazine and “Ten Women to Watch” by Jewish Women International.

Stern serves on the Board of Directors of The Container Store and the We Are Family Foundation, the Advisory Board to the WNBA and the Advisory Council of the Center for Disaster Philanthropy. Prior to joining UNICEF USA, Stern was an executive at the Anti-Defamation League, the founding director of its A WORLD OF DIFFERENCE® Institute, and the Dean of Students at Polytechnic University.

Our CEO Has a Message for the Next U.S. President
Put children first and take on a crisis that now affects nearly 50 million children.
Read More

WATCH: Caryl Stern, President & CEO of UNICEF USA, on Child Refugees
"Society should be measured, is measured, by how we treat our children."
Read More

Joint Statement: An appeal to end the suffering in Syria
Syria
Syria