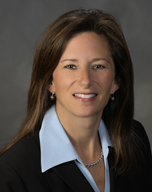 Liz Price is a partner at Alston & Bird LLP.  For over twenty years, Liz was a trial attorney, focusing on cases involving mass torts, product liability claims and complex litigation.  In 2008, Liz became the Firm’s Professional Personnel Partner in charge of all attorney hiring, professional development, promotion, mentoring and training.  She is a past-President of the Atlanta Bar Association and the Atlanta Bar Foundation.  She was the Chair of the Southeast Region of the Anti-Defamation League, one of the oldest civil rights groups in the nation, and currently serves on the ADL’s National Advisory Committee and as its National Civil Rights Committee Chair after serving as Chair of the ADL’s Religious Freedom Task Force and Education Equity Task Force.  Liz also serves on the Board and the Executive Committee of Pace Academy; is a member of the Georgia Commission on the Holocaust and serves on the Board of the NALP Foundation. She is a past member of the Board of Governors of the State Bar of Georgia.

Prior to joining Alston & Bird, Liz attended George Washington University where she received her J.D. and her B.A. in Middle Eastern Studies.  Liz served on active duty in the U.S. Army as an interrogator/Arabic linguist prior to attending college.