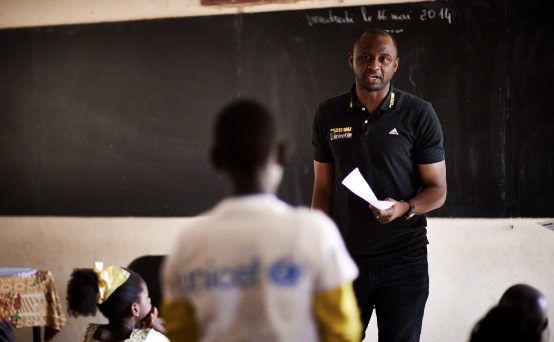 Western Union's Charitable Partnership With UNICEF USA Is Doing a World of Good Since 2006:

Initiatives, activities, and other ways Western Union has supported the UNICEF USA:

Through Western Union's Education for Better program, the Western Union Foundation supports access to education and vocational training, promote financial literacy and personal finance skills, support small businesses that help create jobs for graduates and equip individuals, families and entire communities with the resources and tools they need to better their lives

Through the Western Union Education for Better program, a three-year commitment to education, the Western Union PASS initiative, launched in May 2013, is about harnessing the power of football (soccer) to build awareness of the need for greater investment in education. At the same time, working with UNICEF, the PASS initiative is helping deliver on-the-ground educational support in developing countries, making a positive, lasting difference to young people, their families and their communities.

As the global partner of the UEFA Europa League, Western Union, through its sponsorship of the competition, committed to turning every successful pass into funds for UNICEF to support access to quality education for young people. The PASS initiative aims to support the delivery of one million days of school by the end of 2015. Through the PASS initiative, Western Union has committed to a $1.8 million three-year grant (2013-2016) to support UNICEF education programs in 10 countries with a focus on secondary education, helping young people complete school and have a brighter future. UNICEF is working around the world to improve children's access to a quality education by training teachers, curriculum development, financial literacy, vocational and life skills, as well as school improvements.

In February 2014, Western Union and UNICEF hosted a media event in Istanbul to promote the PASS initiative in Turkey. The event consisted of a press conference with local Western Union leadership, the head of UNICEF Turkey, and World Cup winner Roberto Carlos. Roberto Carlos was also able to interact, ask questions and play soccer with a group of young people benefitting from UNICEF-supported programs.

In May 2014, Western Union and UNICEF launched the PASS initiative’s support in Senegal with World Cup winner Patrick Vieira at a UNICEF-supported school. Patrick Vieira helped teach a lesson and the played soccer with the students. The visit was accompanied by international media, including CNN.

Click here to learn more about these two visits and the work Western Union and the Western Union Foundation are doing through the PASS Initiative.

Western Union and the Western Union Foundation are also supporters of UNICEF’s emergency response. They supported UNICEF's critical efforts to rebuild and improve Haiti’s education system following the devastating earthquake in 2010 with a $600,000 grant, as well as emergencies in Bangladesh, Ethiopia, Sri Lanka, Pakistan, and Syria with more than $300,000 between 2007 and 2014.