With a heritage deeply rooted in the culture of writing, Montblanc shares UNICEF’s commitment to ensure all children have access to a proper education to learn how to read and to write. Montblanc first joined together with UNICEF in 2004 to help provide children with access to a quality education.  Through various global fundraising campaigns, Montblanc has raised more than $10 million dollars to support UNICEF education programs in Latin America, Asia, Africa, and Europe. These funds have helped to transform young lives and make sure that children go to, and stay in, school, supporting UNICEF in its efforts to do whatever it takes to support a child’s right to education.

Initiatives, activities, and other ways Montblanc has supported the UNICEF USA: 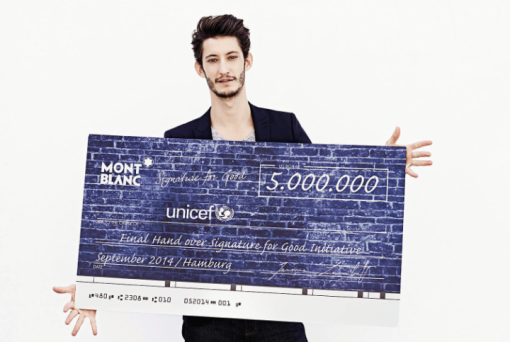 Montblanc renewed the “Signature for Good” initiative in February 2013--its fourth collaboration to support UNICEF’s education programs. This collection of writing instruments, leather products, jewelry and cufflinks with a symbolic brick motif symbolizing UNICEF’s Schools for Africa initiative was part of a year-long charity initiative to support UNICEF’s efforts to ensure that children in Africa, Asia, and Latin America have access to a quality education. For every piece in the “Signature for Good” collection purchased between February 23, 2013, and March 31, 2014, in Montblanc boutiques and partner retailers, Montblanc donated 10% of the retail price to support UNICEF’s Schools for Africa and Schools for Asia initiatives, as well as UNICEF education programs in Latin America, raising $5 million through the global cause marketing campaign. Academy award winner Hilary Swank and Montblanc company officials also visited UNICEF programs supported through its donations in Ethiopia in 2012. 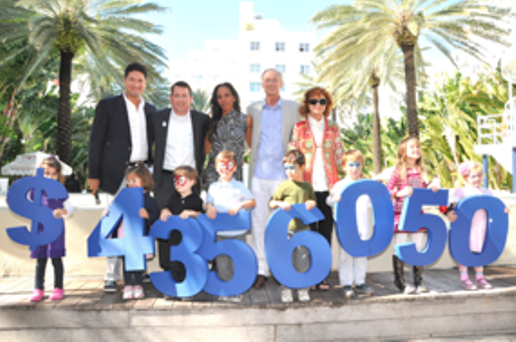 Montblanc’s Signature for Good campaign supported UNICEF education programs in Asia and Latin America, as well as UNICEF's "Schools for Africa" initiative, a joint initiative established in 2004 by UNICEF and the Nelson Mandela Foundation to promote education for all children in Africa. The campaign aimed to increase access to quality basic schooling for all, with a special emphasis on helping the most disadvantaged—including children orphaned by HIV/AIDS and children living in extreme poverty. Montblanc donated 10% of the retail price of each item in the "Signature for Good" global cause marketing campaign to benefit UNICEF's education programs for children. $4,356,050 was raised through Montblanc's global initiative to benefit UNICEF between June 1, 2009 and May 31, 2010.

In 2007, Montblanc launched the "Power to Write" campaign, which raised $272,000 to support UNICEF education programs through the sale of a special edition writing instrument.

In its first initiative with the UNICEF USA in 2004, Montblanc launched the "Right to Write” campaign, raising more than $700,000. The company sold a limited edition of 4,810 pens and 149 leading celebrities agreed to take part in a world-wide campaign revealing their thoughts on the value and importance of writing. 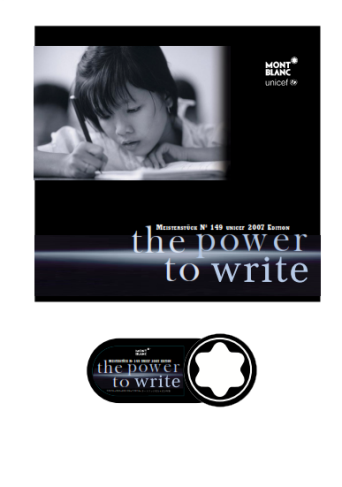