On March 18th, together with the UNICEF Midwest Board, Next Gen Chicago held a UNICEF themed Soul Cycle ride at Old Town Soul Cycle in Chicago. Over 30 members of the Chicago UNICEF community joined our wonderful instructor, Jacklyn, on a cycling journey with some some rock and roll, Michael Jackson, and more soul lifting tunes! Jacklyn did an amazing job providing us with motivation and reminders that we were riding for ourselves and for our community! Through the generosity of Midwest Board Members, Linda Havlin, we were able to give 100% of the proceeds to UNICEF, and together we raised over $1,500 for 45 minutes of sweat, hard work, and self reflection!

The NextGen LA Art Party raised more funds than EVER before, raising a total of $127,210 in support of UNICEF's Emergency Relief Fund. We were blown away by the Paddle8 section with incredible submissions by artists such as Ed Ruscha, Alex Israel, Gray Malin, and many more! We couldn't get enough of the caviar station, NextGen founding member Elizabeth Yale's wine tasting, Salt and Straw ice cream, Clover Juice, and Sweet Lady Jane desserts. Thank you to everyone who came to support such an inspiring evening! And a special thank you to the tireless committee who pulled off such an incredibly cool, artsy, + do good evening! Also check out this article in Installation mag, featuring NextGen Art Party Founder, Gabé Hirschowitz.

The Rights of a Child: Activating Global Solutions through Tech and Innovation (March 6th, 2017)

On Monday, March 6th, Chicago professionals came together to learn more about the importance of child development and how it impacts brands, governments, and market economies worldwide. At the event, a panel of guest speakers included: Gary Stahl, Global Development Expert and Representative at UNICEF Brazil, Carli Gernot, Trends Manager – North America at Mintel, and Eve Geroulis, Director of the MSIMC Program and Senior Lecturer at Loyola University Chicago. The panel offered three captivating perspectives that gave insight on the topic of child development and how technology and innovation can play a role in advancing children's survival.

Gary Stahl offered an inspiring outlook into running one of the largest humanitarian programs in Brazil for UNICEF. Carli Gernot spoke to corporate social responsibility efforts, providing insight on how brands are empowering women and advocating for girls’ education globally. Eve Geroulis shared a heartfelt story of her own family’s resettlement, giving perspective on the refugee crisis in Greece and how she is inspiring her students to take action.

After a night filled with thought-provoking conversations and high-level discussions, many attendees left feeling inspired and enthused about UNICEF’s lifesaving work, and the community of talented and passionate philanthropic leaders that are dedicated to making the world a better place.

NextGen Helps Today's Children By Going Back In Time (February 4, 2017)

NextGen Chicago Steering Committee members Marshaun and Ahsan hosted an unreal evening that spiraled attendees back to the roaring twenties while raising over $30,000 for NextGen's current project. Between the DJs, the refreshments, the craps table, the auction, the overflowing VIP bags, and the perfectly curated photo booth, it was an unforgettable evening.

On January 2016, Louis Vuitton (LV) partnered with UNICEF to support the most vulnerable children around the world. The aim of this global partnership is to raise funds for UNICEF and help support children that are exposed to conflicts, diseases, natural disasters and other situations that threaten their safety and well-being through awareness and commitment. Our New York City resident angels, Donia, Daria, and Nell, attended the NYC event. The partnership has raised $2.5 million to-date to help bring children crucial humanitarian support in Syria and Nigeria. That’s enough to provide 4.5 million children and their families in Syria with water during conflict. Learn more about the partnership and support the world’s children!

LA NextGener, Meri Barnes raised money for NextGen's current project through her incredible Ugly Sweater Charity Fundraiser! NextGen Co-Founder Jenna Bush created our favorite Ugly Christmas Sweater, and it was raffled off to one of the donors who supported our current project. Thank you Meri and Jenna for this creative opportunity to help children around the globe!

Many compliments to Sterling McDavid and Daria Daniel, our chairs for the NextGen After Party at the twelfth annual UNICEF Snowflake Ball! Not that we don't love our men, but man were we grateful for the ladies this evening! Madame Secretary Hillary Clinton presented UNICEF Goodwill Ambassador Katy Perry with the Audrey Hepburn Humanitarian Award. Caryl Stern, UNICEF USA's President, gave us a shout out on the red carpet, stating that she can't wait to continue to work with the NextGen community. Katy Perry and Moll Anderson (the recipient of UNICEF's Spirit of Compassion Award) danced the night away with NextGeners at the after party with The Dolls DJ’ing.

The biggest shout out to NextGen LA for throwing what Nylon Mag called the "party for the ages." The 2016 UNICEF Masquerade Ball was held at the iconic Clifton’s Cafeteria on October 27th in Downtown Los Angeles. Hosted by NextGen, the event raised over $235,000 for our Jamaica project and UNICEF's lifesaving work. The Wes Anderson-themed evening featured an intimate performance by the Cold War Kids, DJ set by Devandra Banhart, a NEON Art Gallery curated by ACE Gallery, a tarot card reader, whiskey tasting, a professional portrait station and so much more. In Jamaican Patois, mi luv yeh Masq Committee and Events Committee! An extra special shout out to Co-Chairs, Danielle Simmons and Matthew Herman for inspiring an event that surpassed our wildest dreams!

On September 19, The Carry the Light event at the United Nations Plaza was an evening to remember! Thank you for joining us, despite the gloomy weather. We heard from a number of speakers, including UNICEF Ambassador, Ewan McGregor, U.S. Fund for UNICEF President and CEO, Caryl Stern, and a handful of child refugees who shared their powerful stories, and inspired us with their continued commitment to putting #childrenfirst.

On August 25th, Gabé, once again managed to put on an unreal night at MIER Gallery in Los Angeles for NextGen LA members. Attendees enjoyed Clover Juice and FoodLab hors d'oeurves as they browsed this unique and tranquil collection. Not only were newer LA members able to attend their first event and mingle with other NextGeners, but a percentage of the proceeds of purchased art went to UNICEF.

On July 7, 2016, NextGen Art Party chair Gabé Hirschowitz hosted an evening to remember with her Summer Soirée at the LA TODAY exhibition curated by Carl Schlosberg. A portion of the art sales from the evening benefitted UNICEF in advocating for the protection of children's rights worldwide.

Works across generations of Los Angeles artists were showcased at Royale Projects: Contemporary Art. Guests experienced the exhibition as they snacked on truffle popcorn and enjoyed music by DJ Toks and an open bar from The Spirit Guild. See more pictures here! 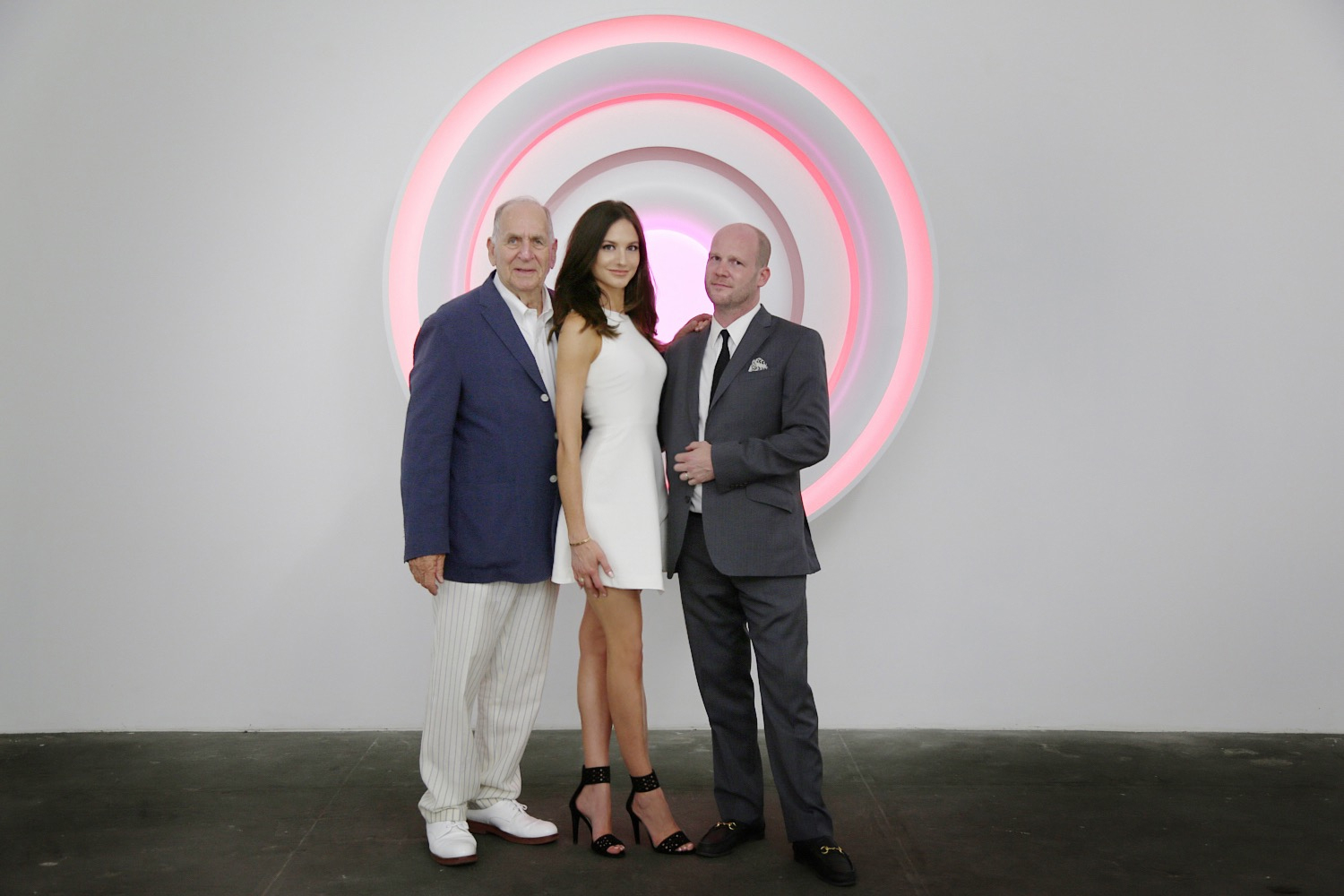