In 1998, UNESCO (The United Nation’s Educational, Scientific and Cultural Organization) proclaimed August 23 as the International Day for the Remembrance of the Slave Trade and its Abolition, to reflect on the consequences of slavery. On August 23rd not only do we remember the slavery, but it is also a time to address modern-day exploitation and human trafficking.

My name is Henry Goldberg, and I am a junior at St. Mark’s School of Texas, located in Dallas. After seeing Caryl Stern speak at our sister school, Hockaday, last year, I was inspired to start our own UNICEF Club at St. Mark’s. During the school year, I met with Hannah Wright, UNICEF’s North Texas Community Engagement Fellow. She suggested that we host a film screening of Not My Life for St. Mark’s, Hockaday, Greenhill, and any other local high school UNICEF clubs that wanted to participate. 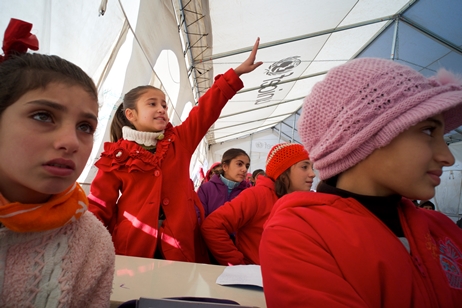 This holiday season, Western Union will match donations to UNICEF via www.unicefusa.org/westernunionsyria to help provide quality education to Syrian children.

On Thursday, October 30, an American Airlines flight attendant volunteer (known as Champions for Children, who collect donations of currency from customers onboard selected international flights to support UNICEF’s Change for Good program) attended the first UNICEF Masquerade Ball in Chicago.