When I think of a refugee, I think of someone forced to flee their country because of some imminent danger, a grave issue they face. War. Persecution. Political Instability.

And although technically correct, this conception feels a bit narrow. You see, thinking of refugees just as people fleeing a country made me forget that they are also people entering a country. Emphasizing the crises they are moving away from led me to overlook the challenges they were moving towards. Focusing on securing their safety from the big problem we can all see made it easy to ignore all the other issues we can’t see. Unfortunately for refugees, these problems cannot be ignored.

All refugees confront significant loss when they leave their home countries.Without having any time to grapple with this loss, they must adapt to an entirely new culture, social order, language and identity — a new life. As if this weren’t enough, many refugees carry intense trauma that they often do not have the chance to properly process. Any of these factors would put one’s mental health at risk, and, for a refugee, they happen all at once.

Egette Indelele, 23, was born in a refugee camp in Tanzania. For World Mental Health Day, she shared how her experiences as a refugee have impacted her mental health and why she decided to become a mental health advocate.

TELL US A LITTLE ABOUT YOUR STORY.

EGETTE INDELELE: Before I was born, my mother and grandmother fled their home country, Rwanda, to a refugee camp in Tanzania. They were forced to flee: their ethnic group, the ethnic group my whole family belongs to, was being violently persecuted. Unfortunately, leaving the country was not enough to escape persecution and my family continued to receive threats of violence within the camp. Because of this, my mom started applying to come to the U.S. I was born in this refugee camp and lived there for seven years, having to move often within the camp to avoid violence before my mom’s application was accepted. And then, when I was 8, we moved to America.

WHAT WAS THAT LIKE? WHAT WERE YOUR FIRST THOUGHTS AS YOU ENTERED THE U.S.?

EGETTE INDELELE: It was like a whole new world. You go from seeing and experiencing immense hardship to a place that seems so peaceful, with cars and airplanes; it’s very overwhelming.

WHERE DID YOU GO AFTER YOU ARRIVED?

EGETTE INDELELE: After landing in New York, we went to Roanoke, Virginia. I came over with my mom, stepdad, grandma, grandpa and all his kids and although the refugee commission gave us some money, it’s barely enough to live. We moved to Roanoke because that was the cheapest and once we were there, my parents immediately started work. They had no time to acclimate or settle down or anything. And as they began to work, I started school. That was the hardest part.

WHAT MADE STARTING SCHOOL SO DIFFICULT?

EGETTE INDELELE: Well, not knowing the language made it incredibly hard to learn or make any friends. More troubling than this, though, was the bullying. In elementary and middle school, people bullied me for being African and called me terrible names. Because of this, I really tried to separate myself from my culture and it wasn’t until college that I felt accepted and I tried to reconnect with my heritage.

DID YOU TALK ABOUT THIS STUFF WITH YOUR PARENTS? DID THEY HAVE SIMILAR EXPERIENCES?

EGETTE INDELELE: Communication in a refugee family is very different from communication in a typical family. Leaving Tanzania, my parents carried immense trauma, which colored our every interaction. We didn’t talk about mental health or whatever was bothering us. We kept to ourselves. I’m not blaming them — their past left them with anger and scars that influenced how they parented me. 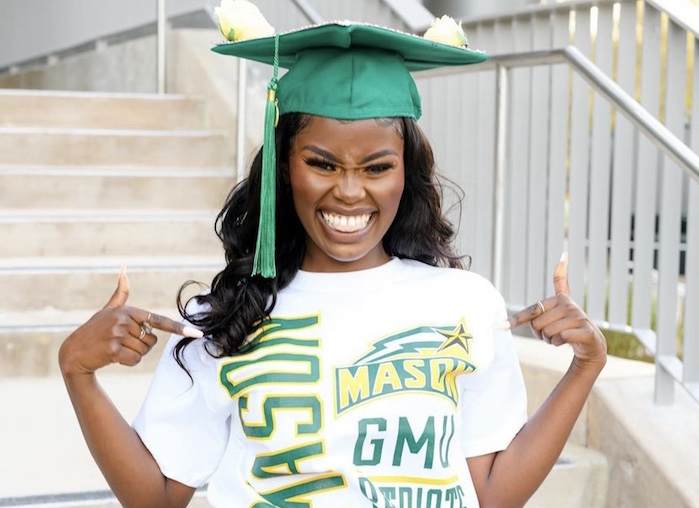 Egette Indelele, 23, moved to the U.S. from Tanzania when she was 8 years old. She founded Safe Haven Space, a non-profit that provides a space for refugees to discuss their mental health struggles with those who can relate best. Egette hopes to ease the transition to American life for young refugees by providing access to much-needed mental health services, addressing one of the greatest challenges they face, but one of the hardest to see. © photo courtesy of Egette Indelele

WHAT WAS THE BIGGEST CHALLENGE YOU FACED AS A REFUGEE?

EGETTE INDELELE: Definitely the mental health part. My mental health, my parent's mental health and how that influenced the family dynamic. Many people think that the trauma is over when you leave your country. This just isn't true. When we moved to the U.S., we brought all our trauma with us and didn't have the time or resources to handle it appropriately.

My parents had seen so much pain and suffering that they often parented from anger. If I ever made the slightest mistake, my parents would be triggered and they would blow up. I can't blame them — they were stressed, overwhelmed,and traumatized, and had no place to work anything through. And that last part is the most important. This isn't about parenting; it's about the lack of mental health infrastructure for refugees to help them process their experiences and acclimate to a new life.

SO WHAT CAN WE DO? HOW CAN WE HELP?

EGETTE INDELELE: Well, two things. First, be accepting. Love and accept refugees as they come and as they are. Between adjusting to a new culture, learning a new language and starting a new life without any time to process the experiences they have just lived through, refugees' problems are far from over when they leave their home country. So be kind.

Second, refugees need more opportunities to connect and decompress. To discuss their experiences with those who have weathered similar storms and safely work through their pain. Right now, refugees are given no time to address their mental health. They arrive in a new country and must immediately work, immediately put their mental needs aside. This has to change.

Ready to take action to protect the mental health of children around the world? Urge Congress to pass the Mental Health in International Development and Humanitarian Settings (MINDS) Act to support the integration of mental health services in U.S. foreign assistance programming.