The World Has Failed to Protect Children in Conflict in 2018

2018 was a particularly awful year for children growing up in conflict zones around the world.

Children living in countries at war have come under direct attack, used as human shields, maimed or recruited to fight. Sexual assault, forced marriage and abduction have become standard tactics in conflicts around the globe.

"Our world is facing increasing conflict, and it can be hard to understand the massive toll these crises have on children," says Caryl M. Stern, President and CEO of UNICEF USA. "There are 28 million children that have been forced from their homes by violence and insecurity, plus those that remain in life-threatening situations and face grave violations. From Central African Republic to Myanmar to Yemen, children are under attack and we must not let this become our new normal." 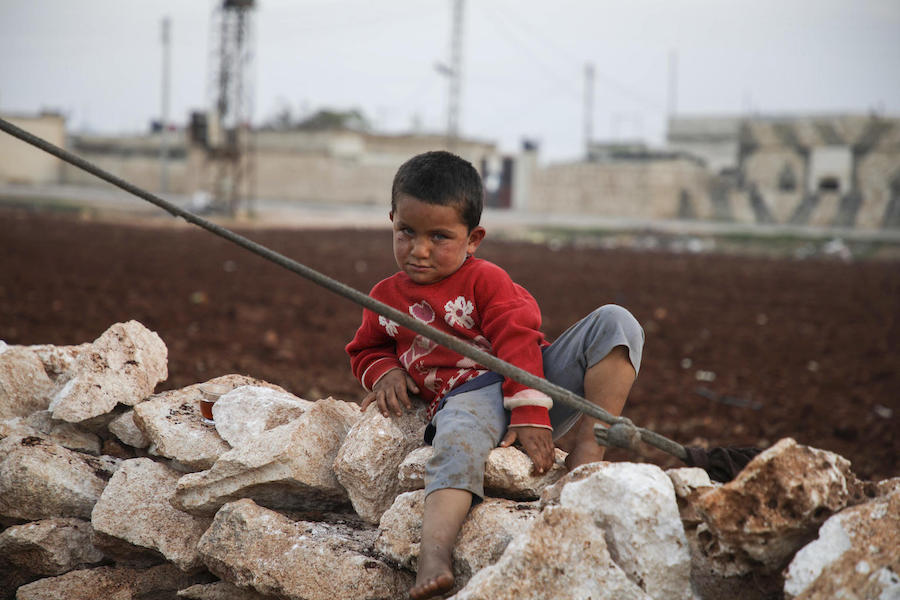 Between January and September 2018, the United Nations verified the killing of 870 children in Syria — the highest number ever in the first nine months of any year since the start of the conflict in 2011. Attacks continued throughout the year, including the killing of 30 children in the eastern village of Al Shafa in November.

Years of violence, displacement and loss of livelihoods have left many families in Syria unable to provide for their children's most basic needs, including winter clothes. Children in Syria — like the boy above, who lives in Batbu camp in western rural Aleppo —are facing an especially harsh winter. 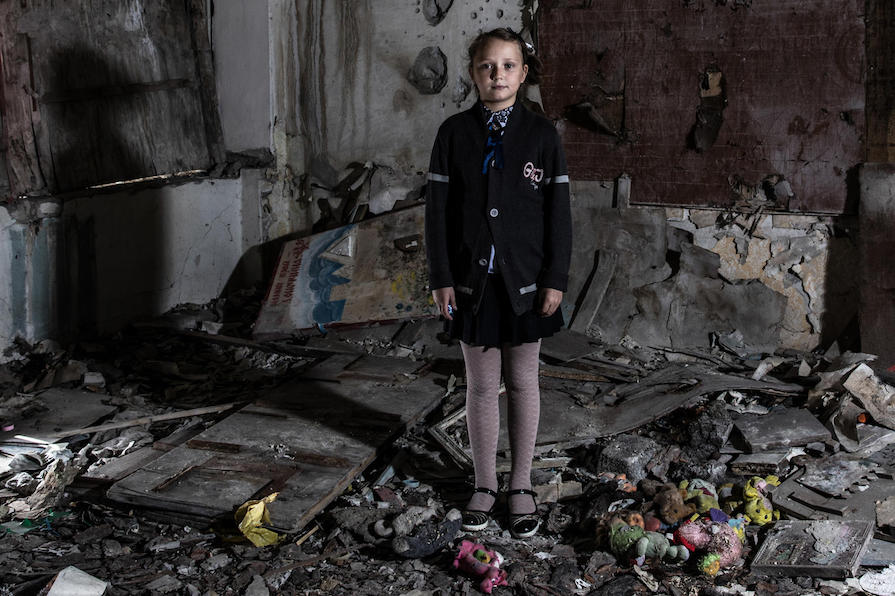 In eastern Ukraine, more than four years of conflict have taken a devastating toll on the education system, destroying and damaging hundreds of schools and forcing 700,000 children to learn in fragile environments, amidst volatile fighting and unexploded weapons of war.

Masha, 11, stands in the ruins of the kindergarten classroom in her old school in Novotoshkivske in the Luhansk region of eastern Ukraine. In 2015, when she was in second grade, the school took a direct hit from a shell that caused massive damage to the surrounding residential area.

Masha remembers sitting in the bathroom for hours in the summer during a period of shelling. "We didn't talk much. Mom was crying... I was asking, 'Is it over yet?' and my Mom couldn't say anything." 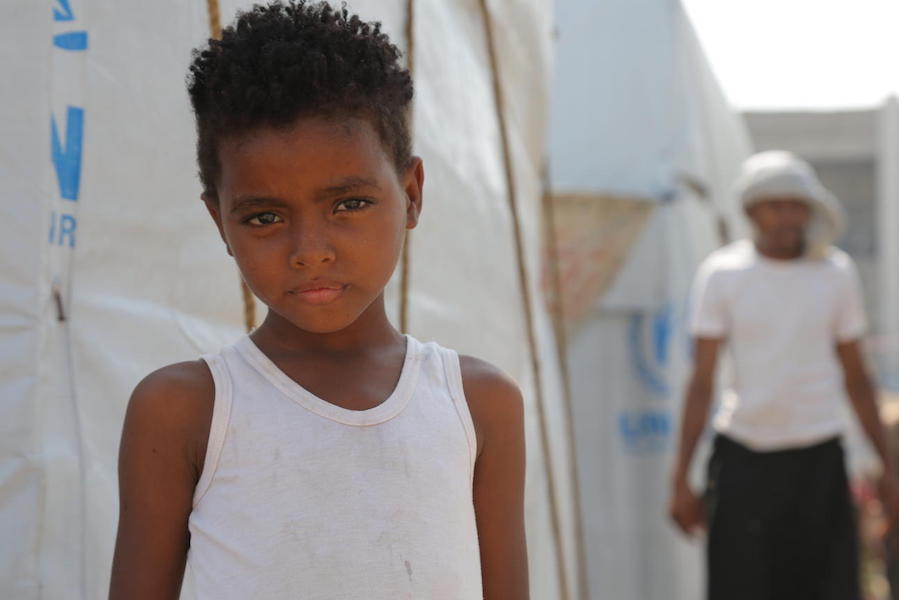 Yemen's brutal civil war has left more than 11 million children — 80 percent of all children in Yemen — in need of humanitarian assistance. Schools and hospitals have come under frequent attack or been used for military purposes, denying children the health care and education they need to survive and thrive.

The conflict has driven an estimated 1.5 million children from their homes. Above, a boy stands outside a temporary shelter at a camp for internally displaced persons in Aden, Yemen. In South Sudan, armed groups have recruited thousands of children into their ranks. Jackson, 12, (left) and Ganiko, 13, were among a group of more than 200 children released by militias in Yambio, South Sudan in April 2018. The children receive medical attention, counseling and vocational training in a reintegration program implemented by UNICEF and partners.

UNICEF helped arrange for the release of approximately 1,000 children in 2018, but 19,000 are still serving in the ranks of armed forces.

While the promise of a revitalized peace agreement offers a glimmer of hope for children, reports of extreme violence against women and children continue, most recently in Bentiu, where more than 150 women and girls were the victims of horrific sexual assault. 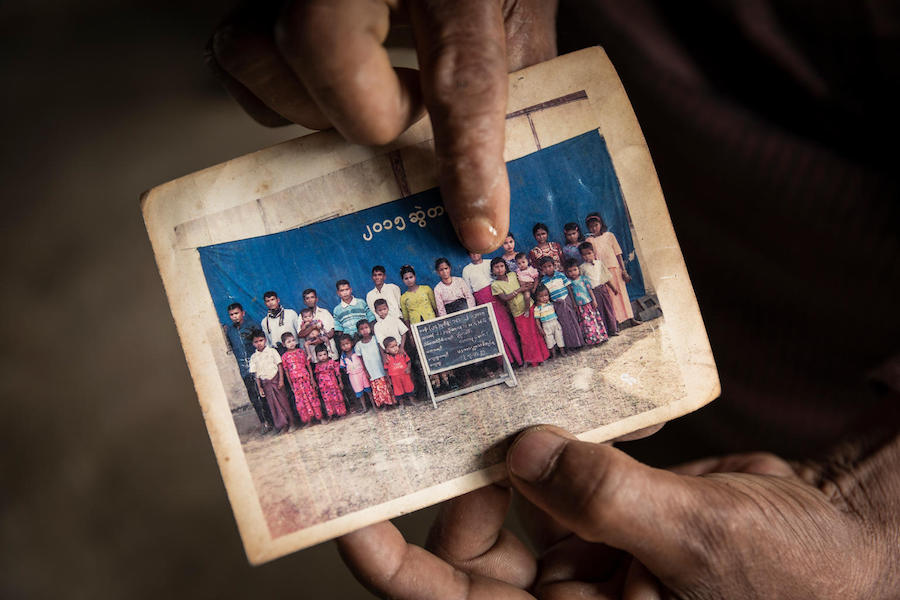 The United Nations continues to receive reports of ongoing violence against Rohingya people in Myanmar, including allegations of killings, disappearances and arbitrary arrests. Since August 2017, 707,000 Rohingya refugees have streamed across the border into Bangladesh, fleeing extreme violence perpetrated by military groups. Women and girls have been targeted in a widespread campaign of sexual violence.

Above, Rohingya refugee Nur Mohamed points to his 13-year-old niece, Rupchanda, in a family photo. Rupchanda disappeared while waiting in a food distribution line at Kutupalong refugee camp in Cox's Bazar, Bangladesh. Her parents and four of her siblings were killed in Myanmar.

"Rupchanda was pretty and intelligent," says Mohamed. "I suspect somebody took her for some purpose. Some other girls have gone missing too. This is a very dangerous place for children." 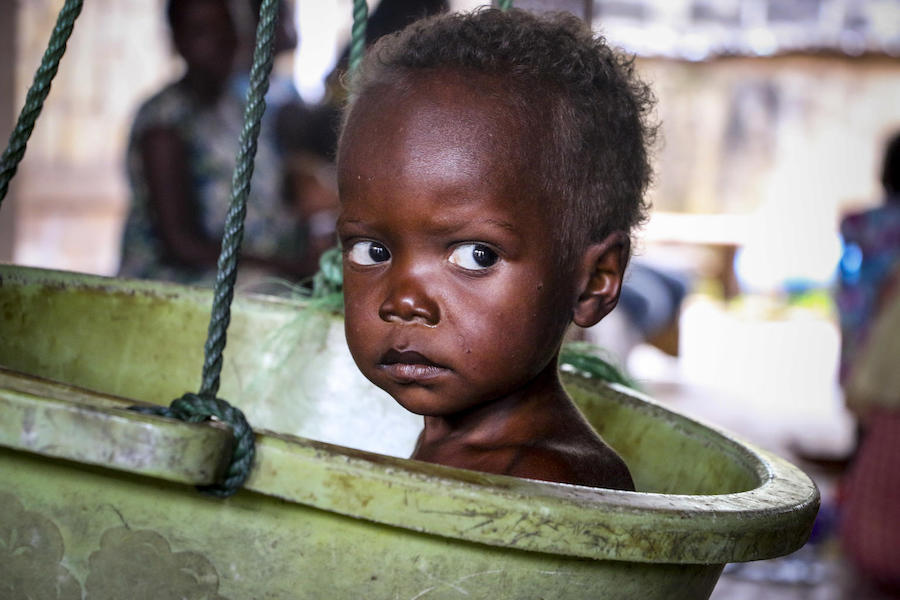 A dramatic resurgence of fighting in the Central African Republic enveloped much of the country in 2018. Instability has cut off supplies and driven at least 643,000 people from their homes. Two out of three children need humanitarian assistance.

Pierre, 3, weighed only 19 pounds when his father brought him to the UNICEF-supported malnutrition stabilization center at the country's only pediatric hospital, in Bangui. More than 43,000 children under age 5 are projected to face severe acute malnutrition in 2019. UNICEF provides virtually all the therapeutic food and emergency education supplies in CAR, even as attacks on aid workers have quadrupled. 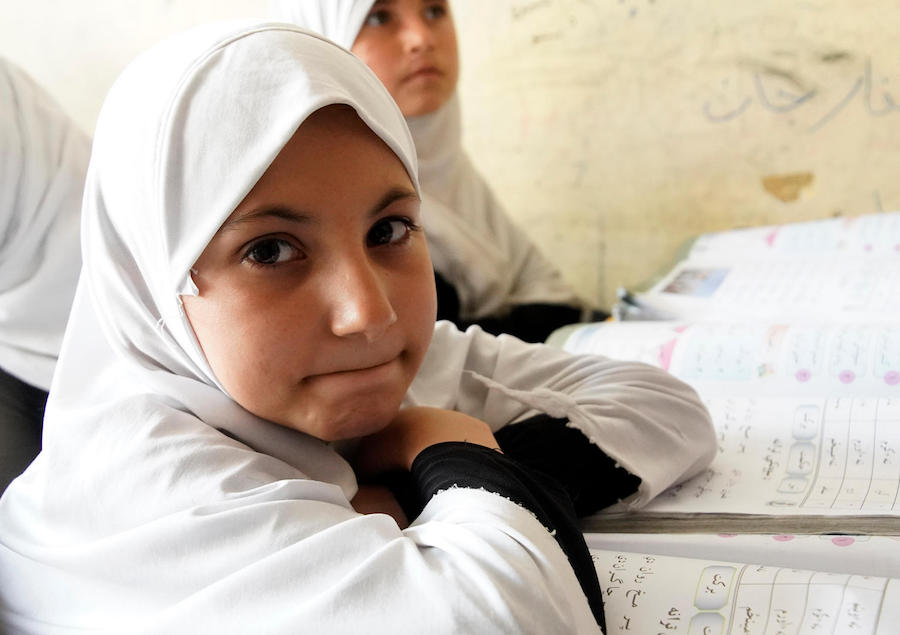 In Afghanistan, violence and bloodshed remain a daily occurrence, with some 5,000 children killed or maimed in the first nine months of 2018, equal to all of 2017. Across the country, children make up 89 percent of civilian casualties from explosive remnants of war.

More than three decades of sustained conflict have critically affected Afghanistan's fragile education system. An estimated 3.7 million children are out of school in Afghanistan; 60 percent are girls. Above, a young student looks up from her studies at one of the largest schools in Jalalabad supported by the UNICEF Afghanistan Country Office.

"2019 marks the 30th anniversary of the landmark Convention on the Rights of the Child and the 70th anniversary of the Geneva Conventions, yet today, more countries are embroiled in internal or international conflict than at any other time in the past three decades," says Manuel Fontaine, UNICEF Director of Emergency Programs. "Children living through conflict are among the least likely to be guaranteed their rights. Attacks on children must end."

UNICEF calls on all warring parties to immediately end violations against children and the targeting of civilian infrastructure, including schools, hospitals and water facilities. UNICEF also calls on states with influence over parties to use that influence to protect children now.