Why Give? Because Mothers Everywhere Have Big Hearts | UNICEF USA

Why Give? Because Mothers Everywhere Have Big Hearts

"We give because it's our priority to put children first — and not just our own."

UNICEF USA Assistant Director of Public Relations Erica Vogel recently returned from Cox's Bazar, Bangladesh, where she visited some of the sprawling settlements that have sprung up to house the waves of Rohingya refugees fleeing horrific violence in Myanmar's Rakhine State. Here is her firsthand account:

Why Give? It seems like a simple question, especially when you see someone is in need and you have the means to help. I believe we’re all intrinsically wired to help others. But it’s not always that simple, even for me. I work for UNICEF and, like our Bangladeshi partner, social worker Baby Barua, I struggle to give sometimes.

I’m a mom to two girls, one who’s only 7 months old, and I struggle with balancing my responsibilities: being there for Leo and Romy, and being there for the rest of the world’s children.

I'm a mom to two girls, one who's only 7 months old, and I struggle with balancing my responsibilities: being there for Leo and Romy, and being there for the rest of the world's children.

Last month, I accompanied a team of journalists to Cox’s Bazar, Bangladesh, to shine a light on the extraordinary needs of Myanmar's Rohingya. Members of the ethnic minority Muslim group are being forced from their homes at the rate of 2,000 a day in the midst of a campaign of violence carried out by their own country’s army and even Buddhist monks. Since August, violent attacks by military forces in Myanmar have driven more than 623,000 Rohingya from their homes and into neighboring Bangladesh. More than half of them are babies and children, many of them separated from their parents.

Since August, more than 623,000 Rohingya have made the perilous journey to neighboring Bangladesh, arriving on flimsy rafts, exhausted and in desperate need of food and water. More than half of them are babies and children, almost none of whom are able to swim. They arrive with shocking stories of having watched young family members being burned alive or shot while trying to run away.

Meanwhile at home, my 3-year-old daughter, Leo, was battling demons of her own.

Meanwhile at home, my 3-year-old daughter, Leo, was battling demons of her own: the imaginary kind. Since I’d been away on two other work trips in the same month, my own babies had been missing me and my fearless Leo started feeling anxious around bedtime, listing her fears of everything from the dark to fire to spiders, and waking up screaming for me. 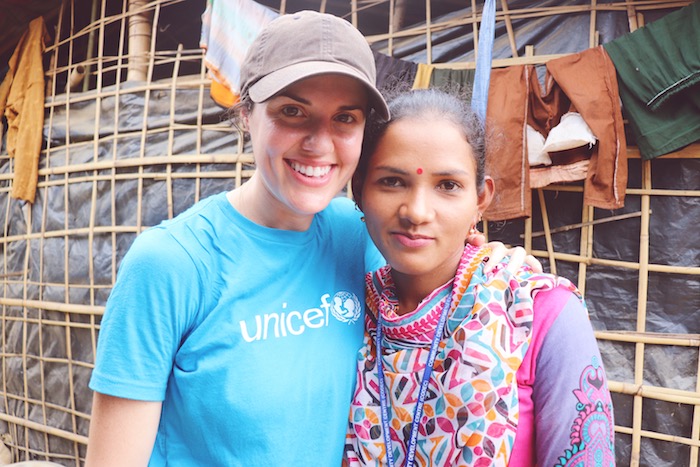 UNICEF USA's Erica Vogel, left, with UNICEF partner, Bangladeshi social worker Baby Barua, who has been working with Rohingya children in the Child-Friendly Space in Balukhali refugee camp for the past year.

Baby Barua was dealing with similar issues. Her 2-year-old son, Shapno, whose name means 'dream' in English, had been sick and running a fever for a week. She took him to the hospital on her way to work at the Child-Friendly Space in Balukhali refugee camp.

Eight-year-old Farmina's father was murdered; her aunt was raped in front of her and later murdered.

Baby has been working with Rohingya children for about a year. Seven-year-old Yeasmin and 8-year-old Farmina were expecting her at the Child-Friendly Space. There, along with approximately 200 other Rohingya children, they shared their heartbreaking stories with Baby. Farmina's father was murdered; her aunt was raped in front of her and later murdered. For the traumatized children, Baby is a constant, soothing presence at the center, where they can begin their long healing process through counseling, art therapy, play and soccer. 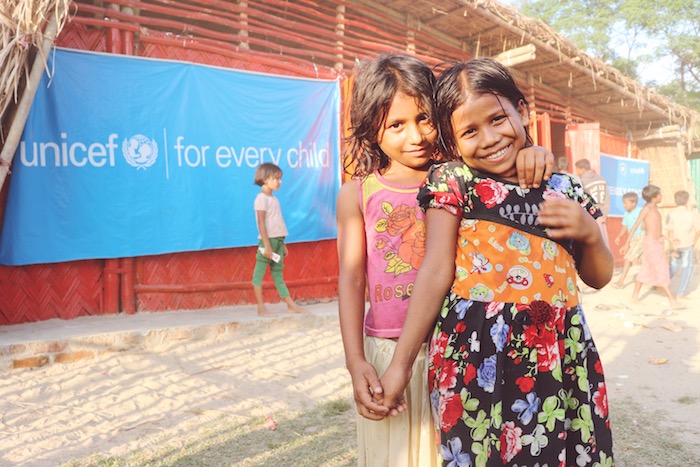 Seven-year-old Yeasmin, left, and 8-year-old Farmina are among the many Rohingya refugee children who have arrived in Bangladesh traumatized by recent events in Myanmar. UNICEF has set up Child-Friendly Spaces in the growing refugee settlements where children can go to learn, play and heal.

Baby and I chatted while the team of journalists met with young volunteer Child-Friendly Space attendant Joynab, who at just 10 years old is heading up her household, cooking and caring for her sick mother and three younger siblings. Khalid, a young man who works in UNICEF's Bangladesh office, helped translate our conversation.

We swapped feelings of guilt for leaving our kids behind but also feelings of being pulled to the greater need here. Here was our priority for now. Baby needed to be here for children like Joynab and I needed to be here to help ensure her story reached the rest of the world. As we talked, our translator, Khalid, began to cry: It isn't only working moms who feel stressed and overwhelmed.

As we talked, our translator, Khalid, began to cry: It isn't only working moms who feel stressed and overwhelmed.

Our children were home and safe being looked after by husbands and grandmas, but we couldn’t say the same for young Joynab, left in charge of her family after seeing her father murdered as the family tried to flee the violence. 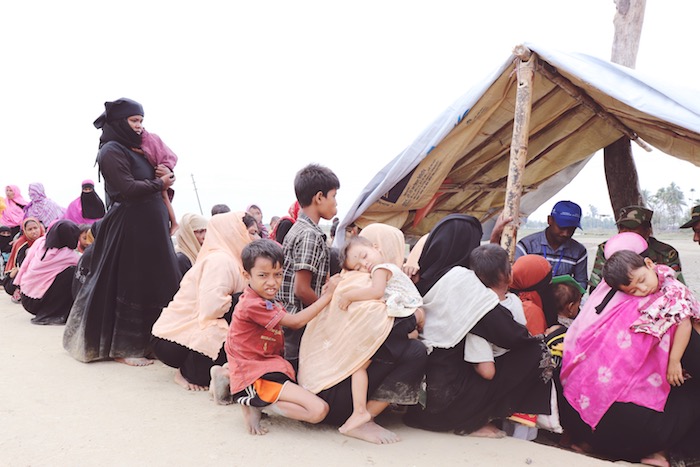 Rohingya refugees make the long journey from Myanmar to Bangladesh by foot and across rivers, arriving exhausted, dehydrated, hungry and in urgent need of medical care. UNICEF and partners are stepping up efforts to provide nutrition, health care and protection for child refugees and their families.

Baby, Khalid, the journalists and so many others are giving their hearts and energy and so much more to make sure the Rohingya refugees — like Yeasmin, Farmina and Joynab — are getting all the help they urgently need and deserve. But the decisions to do so aren’t always easy, even though these are the jobs we signed up for and they’re often rewarding. We are also very aware that our struggles are small compared to what these refugees and the millions of others around the world are experiencing.

Baby, Khalid, the journalists and so many others are giving their hearts and energy and so much more to make sure the Rohingya refugees — like Yeasmin, Farmina and Joynab — are getting all the help they urgently need and deserve.

We give so the number of Rohingya with measles stays at 1,270. We give so the 17,000 children under 5 suffering from Severe Acute Malnutrition will get the Ready-to-Use Therapeutic Food packets that will help bring them back to health. We give so we can reach another 90,268 children with psychosocial support. And we give because it’s our priority to put children first — and not just our own.

Will you join us?

Please consider donating to help the Rohingya and millions of other vulnerable children around the world.

All photographs by Erica Vogel for UNICEF USA.