She was a kid on a plane bound for Bolivia to visit her grandparents the first time Lorena Camacho saw a flight attendant come around to collect donations for UNICEF. "It really intrigued me," Lorena recalls. "I wanted to learn more. I wanted to get involved."

Fast forward — Lorena, based in New York, is now a flight attendant for American Airlines. Putting the "good" in the airlines' slogan "Going for Great," Lorena is a Champion for Children for UNICEF's Change for Good program, which American Airlines has long supported. 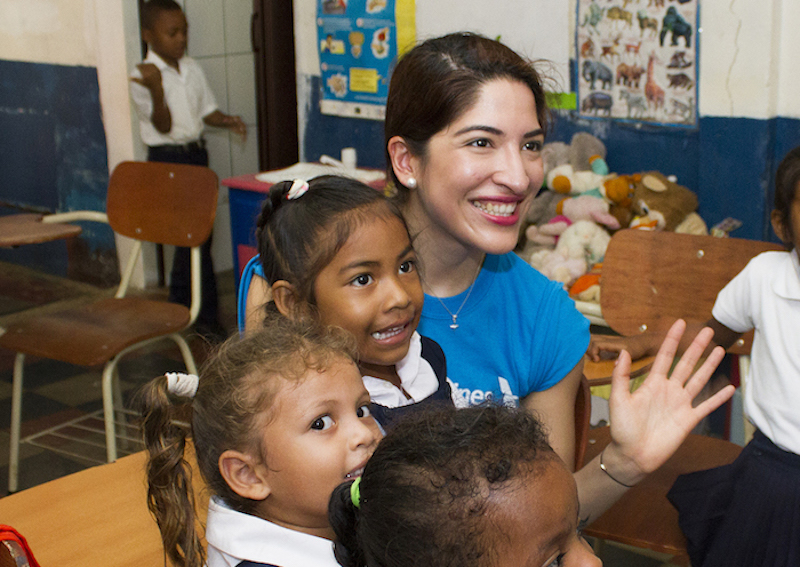 Since UNICEF and the international airline industry teamed up to create the Change for Good program in 1987, flight attendants have collected more than $156 million — no small feat, especially in midair — to help fund schools, health clinics and sanitation programs around the world.

Last May, Lorena (above, with UNICEF in Nicaragua) had a chance to make that connection personal. With other participating American Airlines flight attendants, Lorena traveled to Nicaragua with UNICEF to meet some of the children and families who are benefiting from Change for Good and to see the impact of the program up close.

The group visited the Virgen El Carmen primary school in El Bluff to see recent improvements the funding had helped make possible. The visitors played games and did some painting and other art projects with the kids. "It was amazing," Lorena says. "Now when I go up and down the aisles collecting donations from passengers, I can say, "I've been there, I've seen firsthand how UNICEF helps children and families."

"The kids in Nicaragua were telling me stories, and they were so funny and imaginative. It's great that UNICEF is helping them, making sure they have the opportunity to learn and to have what they need to grow strong. Any one of these kids could be the next Einstein." 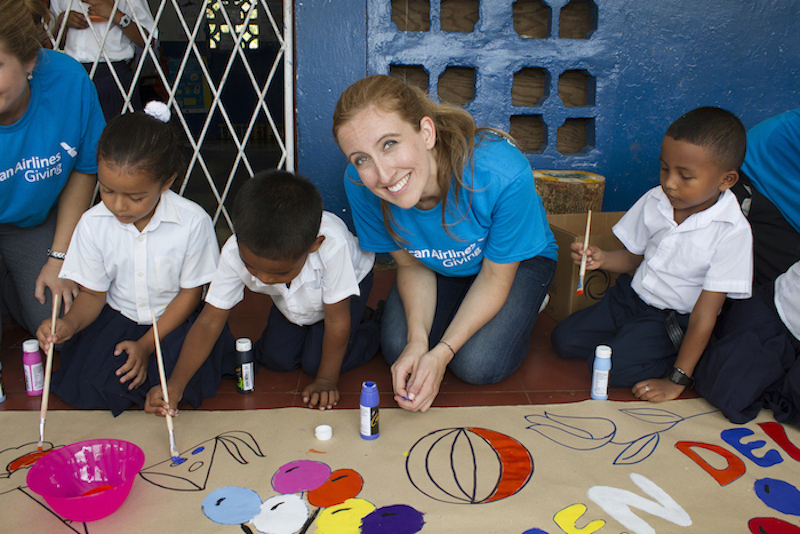 Both women say they were especially pleased to see the new clean water taps and toilets that had been installed at the school with UNICEF's help — and to get a real sense of how important proper water and sanitation facilities are to students and teachers, and how greatly they impact the day-to-day school experience.

"It really makes such a difference for these kids, to be able to go to a bathroom without waiting, to be able to wash their hands afterward," Suzanne says. "It's so simple, yet so effective, helping kids avoid getting sick and having to miss school — all things we take for granted here in the U.S."

After lunch, the children lined up to brush their teeth, each with a cup of clean water in hand. "The principal told us it had been her lifelong dream to have water at the school. And there it was, flowing freely," says Suzanne. "It was very powerful."

Marysia recalls a memorable afternoon the group spent observing a vocational training program for teenagers and young adults, followed by a friendly soccer match — kids against adults. The students in the program are learning plumbing, masonry and other job skills. On the day of the visit, they were filling empty soda bottles with sand and using them as bricks to build a retaining wall around a rainwater collection tank — the kind of community-led intervention that UNICEF supports through its water, sanitation and hygiene programs.

"I really enjoyed talking to these kids and hearing about their dreams and ambitions," Marysia says. "They were very passionate about being able to give back to their communities, and this program was teaching them the skills they need to do that." And the soccer? She smiles. "They won, hands down."

At a health clinic in Bluefields, another stop during the field visit, the women had an opportunity to meet some of the children and families who come in for services including vaccinations, treatment for malnutrition, and help with breastfeeding and newborn care.

"Children are still dying of preventable causes, and vaccines are such a big part of bringing those numbers down," Suzanne (above) notes. "I was so happy seeing these kids getting what they needed to stay healthy. I also saw a baby who was just a few weeks old, getting lifesaving treatment. These health workers — they are angels on the ground."

What struck Marysia throughout the trip was seeing how UNICEF works with the government, local NGOs and other partners on the ground to get things done. "That was cool to see," she says. "I learned that UNICEF doesn't just swoop in, that they work with communities to make the changes needed to improve lives."

UNICEF relies on contributions that come through these kinds of corporate initiatives, and from private donors like you. Every dollar makes a difference. Consider helping UNICEF continue to give hope to millions of children and families in need around the world.