Best Valentine's Gift of 2022? One that Saves Lives | UNICEF USA

What's the Best Valentine's Gift of 2022? One that Saves Lives

The ten-year war in Syria has displaced millions of Syrian children and families, many of whom are cold or hungry or both. Rising fuel costs mean many parents must make the heart-wrenching choice between buying clothes or food for their kids. During winter especially, children need both to survive.

Three-year-old Kawthar, above, and her family have been living in a tent in the Alzhourieyh camp east of Homs waiting to return to their home since 2019. When Kawthar tried on her new wool hat and scarf she received as part of the winter clothing kits UNICEF distributed in Alzhourieyh, her mother, Turkiyeh, 39, said: “These came just in time.” In winter, tents like the one where Kawthar and Turkiyeh live are no match for the freezing rain and snow. Neither are the wood and tree twigs the family burns to fend off the cold. In late January, when heavy snow blanketed northwest Syria, thousands of tents were destroyed in displacement camps in Idlib and Aleppo governorates; one child died.

This Valentine’s Day, give your loved ones the gift of knowing they've helped by sending blankets, warm clothing and emergency supplies in their name to kids who are struggling to make it to spring. Dedicate a UNICEF Inspired Gift in their name, and UNICEF will make sure those supplies get to children in need, and send a Valentine’s Day e-card to your loved one, letting them know how much they mean to you — and to children around the world.

Since 2019, some 3,300 people like Kawthar and her family have taken shelter in Alzhouriyeh. Most of them have come from Rukban, a remote desert camp by the Syrian-Jordanian border. Hoping to return to their homes once it's safe, these 650 families have been living in limbo in tents, without adequate food, heating or access to the most basic services. 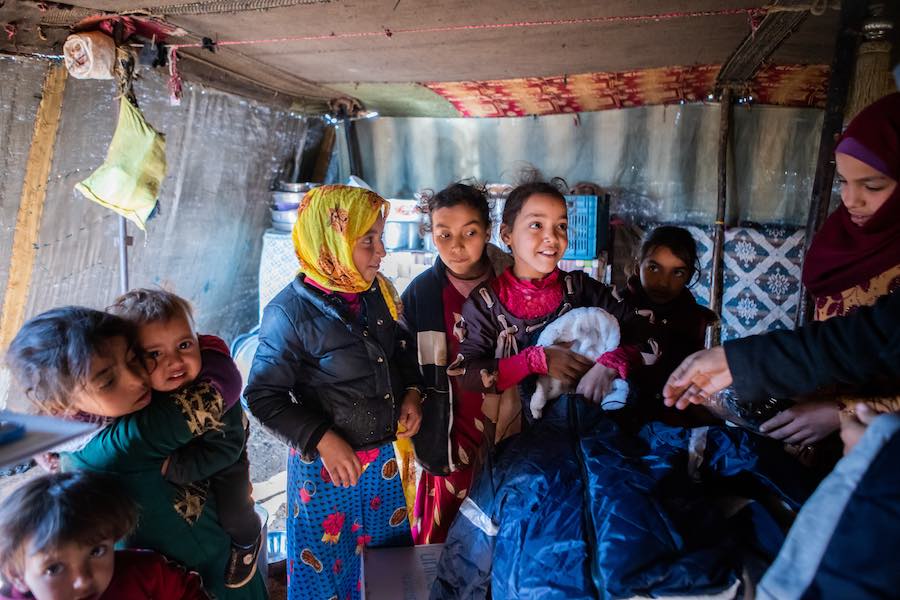 Since Kawthar's family fled escalating violence back home in Palmyra, central Syria, the children have had to do without the most basic necessities. “I’m not able to buy food for my children, let alone clothes,” says their mom, Turkiyeh. “Too often, I rely on the kindness of neighbors and strangers to get by.”

Parents like Turkiyeh love UNICEF winter clothing deliveries because these supplies help protect their children and keep them safe and warm. But top of mind for children like Kawthar's big sister Fatima, above in red shirt, is something else that being able to go outside provides.

“I’m happy,” says Fatima, as she inspects her new winter coat in the family tent. “Now that I can keep warm, I will be able to go to school.” 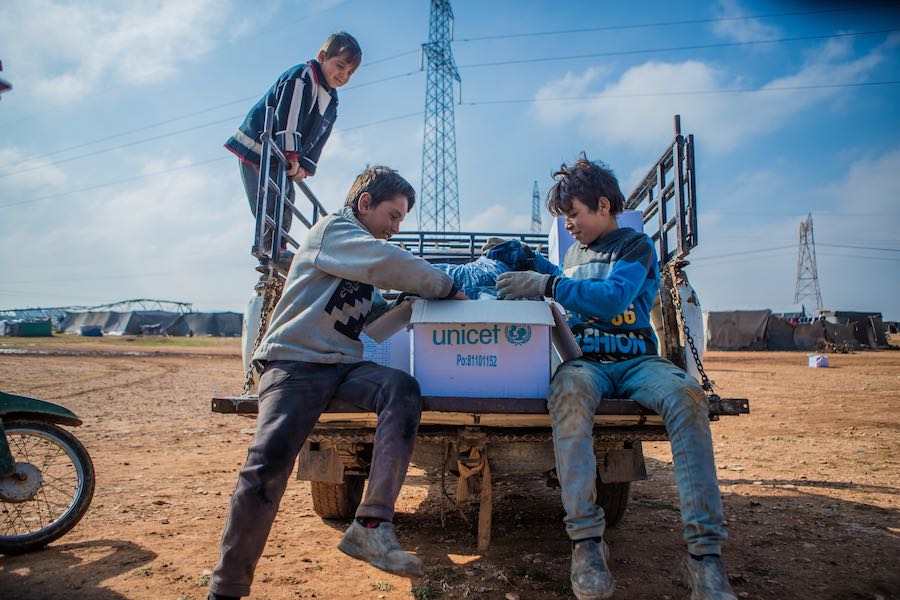 Yamen, 13, above center, and his 12-year-old brother, Yousef, right, live in Alzhouriyeh too. Like Fatima's mom, their father, Farhan, has also struggled to provide for his family. “For two years, I haven’t bought the children a single piece of clothing,” he says. “Sometimes the kids go to sleep hungry, and we don’t have enough means for heating, so they often get sick because of the cold.”

Out of work for the past two years, Farhan can't afford health care for his family, so he and the boys' mother, Njoud, have kept the kids home from school when it's cold. But now, thanks to Yamen and Yousef's new winter gear, the weather won't hold them back. “With the new clothes and supplies, I’d feel more reassured they can stay warm,” says Njoud. UNICEF winter clothing kits bring warmth to over 3,200 children — from newborns to kids up to age 14 — who live in camps and shelters across Homs governorate. Kits for babies include fleece onesies, gloves, hats, socks, blankets, coats, hygiene supplies and a bag that holds everything. Kits for toddlers and up contain winter jackets, wool sweaters and hats, thermal underwear, pants, scarves, gloves, socks, boots and warm pajamas.

Still, the need is tremendous, and many children have gone without for far too long. 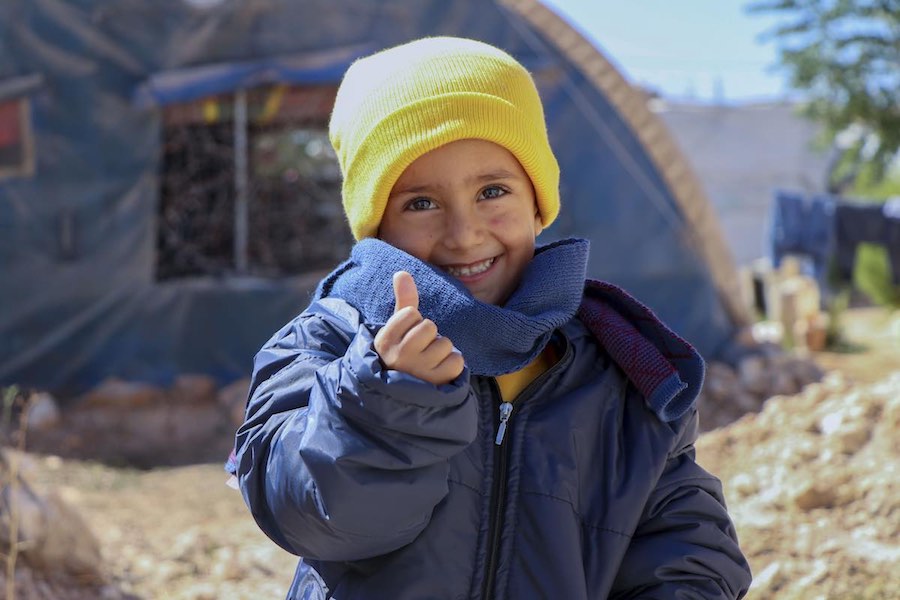 For 4-year-old Rashid, above, UNICEF's October winter clothes delivery at the Fafin camp in northern Aleppo has meant he could keep warm for the first time since his family fled violence near their home. Watching Rashid try on his new coat and hat, his grandmother Alia said: “We haven’t been able to buy a single item of clothing since we got here.” The family have lived in the Fafin camp since 2018.

Top photo: Three-year-old Kawthar received a warm hat and scarf as part of a winter clothing kit recently distributed by UNICEF. Displaced from their home by violence, Kawthar and her family have been living in a tent in the Alzhourieyh camp east of Homs, Syria since 2019. © UNICEF/UN0581830