What You Need to Know About the World's Deadliest Cholera Outbreak

Cholera is on the rise in the Democratic Republic of the Congo. Here's how you can help UNICEF protect the lives of children at risk.

This year, with the second largest Ebola outbreak in history hopefully under control, another health crisis is looming large in the DRC: cholera.

Cholera is an acute diarrheal infection caused by eating food or drinking water contaminated with a bacteria, V. cholerae. If not treated promptly, the disease can become deadly within hours, even in previously healthy people.

It's highly contagious — the risk is greatest among impoverished people who live in crowded conditions without adequate sanitation.

Most people exposed to the cholera bacterium do not become sick, but they can still infect others because their stool contains cholera bacteria for 7 to 10 days. When sanitary conditions are poor, the stool contaminates water that can then transmit the disease to others.

2. Is there cholera in the United States?

Adding chlorine to drinking water kills cholera bacteria. That's why cholera is very rare in the United States — modern water and sewage treatment systems stop the bacteria from spreading. Nearly all cholera cases in the U.S. are acquired during international travel or by eating contaminated food brought into the country. 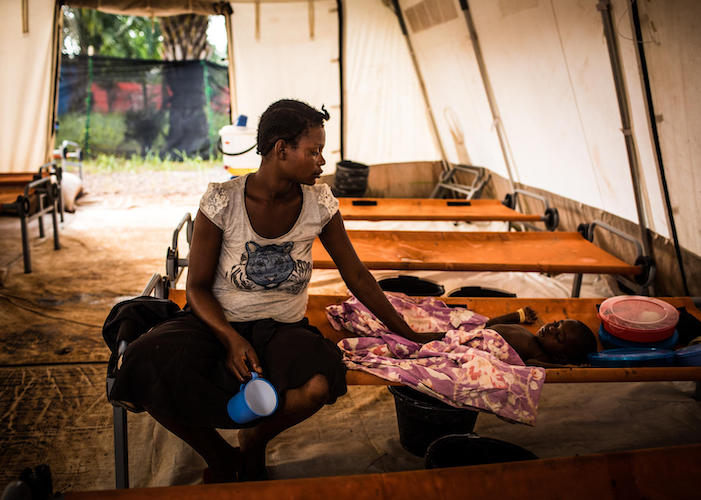 Mado Tshiabo sits beside her 3-year-old son, Costa, the day after she rushed him and his sister to a UNICEF-supported cholera treatment unit in Mbuji-Mayi, Democratic Republic of the Congo. "At 5 AM, I saw the children doing liquid stools and that's how I realized they were sick," she said. "They are doing way better than when they arrrived at the treatment unit. They could not even walk. Nor eat. Now at least they can eat and walk, even if they are still weak." © UNICEF/UNI232074// Vincent Tremeau

3. How bad is the cholera outbreak in the Democratic Republic of Congo?

The DRC cholera outbreak is by far the world's deadliest. Last year, more than 17,000 cases of cholera were recorded in the DRC. The 2019 cholera death toll is three times higher than it was in 2009.

More than 2,500 cases and 40 deaths have already been reported in 2020, with a case rate fatality (CRF) of 1.7 percent. In the province of Haut-Katanga, the CRF is an alarming 9.1 percent. Without resources to fight this sanitary crisis, the number of confirmed cases could rise to more than 30,000 this year alone, with a death toll of over 1,000.

4. How does cholera affect children?

Cholera is particularly dangerous for the very young, the very old and the undernourished. Children under age 5 have the highest incidence of cholera and are more likely to die from it. Breastfeeding helps protect infants and toddlers from cholera. 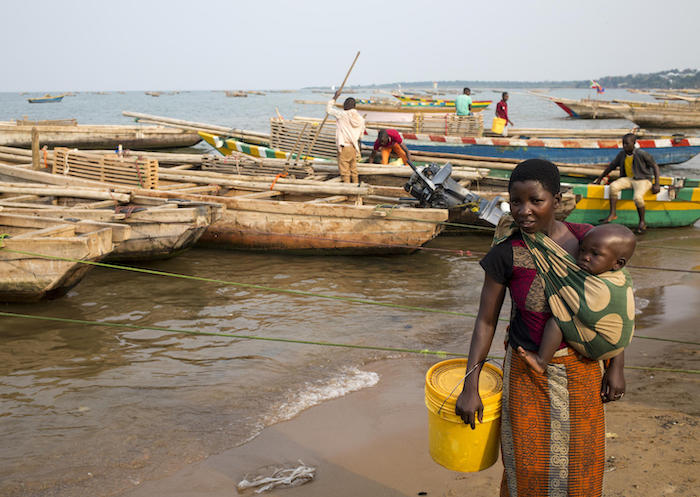 A woman carries a child while collecting water from Lake Tanganyika at the commercial port in Rumonge, Burundi. UNICEF installed handwashing stations at the port to fight the spread of disease. The lake, a primary water source, is shared by four countries: the Democratic Republic of the Congo, Burundi, Tanzania and Zambia. © UNICEF/UNI213028/Prinsloo

5. What is UNICEF doing to fight cholera in the DRC?

UNICEF is launching a yearlong multisectoral emergency initiative to cut cholera transmission in the DRC, with a focus on three provinces: North Kivu, South Kivu and Haut-Katanga. Year after year, the same "hot spots" are affected. Suspected cases are reported weekly, almost permanently, indicating these areas are likely sources of the disease.

Popular wisdom held that cholera came from bacteria living in Lake Tanganyika, a primary water source. But recent studies designed to locate the presence of the bacteria in the lake have been inconclusive. Instead, the focus has shifted to stopping the constant stream of bacteria fed into the lake by affected people living in these coastal "hot spots."

Working with partners, UNICEF will use a strategy of case-area targeted intervention (CATI) proven to be effective in stopping cholera transmission in Haiti, now celebrating its first anniversary without a single confirmed cholera case. Community cholera response teams will: 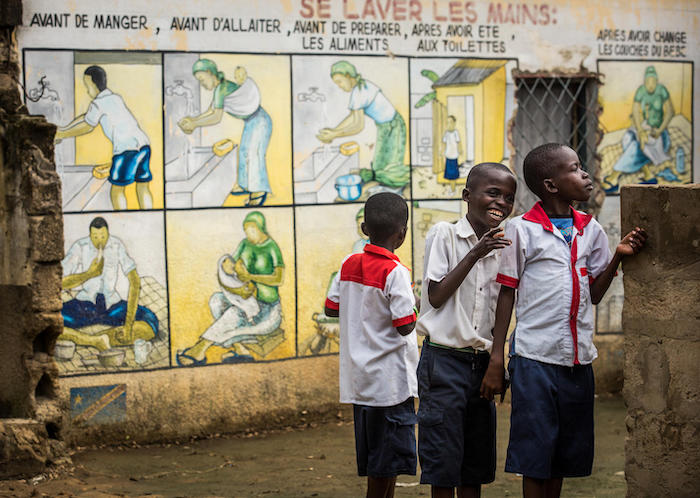 Students stand beside a mural illustrating the importance of handwashing in Kinshasa, Democratic Republic of the Congo. © UNICEF/UN0157535/Tremeau

6. What are the symptoms of cholera?

The symptoms of cholera — watery diarrhea, vomiting, nausea — can come on suddenly. Without treatment, people with cholera can become severely dehydrated, leading to acute renal failure and death. Symptoms appear between 12 hours and 5 days after drinking contaminated water or eating contaminated food.

7. What is the treatment for cholera?

The primary treatment for cholera is rehydration with oral rehydration salts and, when necessary, intravenous fluids and electrolytes. When treated promptly, 99 percent of cholera patients recover without lasting effects. Survivors can be reinfected if they are exposed to the bacteria again. Frequent hand washing and practicing safe food and water precautions are the best ways to prevent cholera.

8. Here's how you can help UNICEF fight cholera in the DRC:

Donate. UNICEF and partners have already reached thousands of households in North Kivu province since the current emergency elimination program began in January 2020. Your generous contribution will help UNICEF break the cycle of cholera outbreaks in the DRC and give children the chance to grow up healthy and safe.

Top photo: A UNICEF-supported health worker disinfects a house for cholera in the Camp Luka neighborhood of Kinshasa, Democratic Republic of the Congo. © UNICEF/UN0157540/Tremeau