Amid a terrifying epidemic, some Ebola victims are beating the odds and the disease.

Timothy La Rose is a UNICEF Communication Specialist based in Conakry, Guinea.

Shortly after the outbreak of Ebola in Guinea, when it seemed like bad news was the only news, UNICEF’s office in Guinea started to receive reports of something that seemed almost impossible, given the climate. Ebola victims were being released from the hospital, completely recovered. They were healthy and even given certificates signed by health authorities stating that they could safely return to normal life.

"I have no idea where I got Ebola ... I am a medical student and encounter many sick people."

We knew that there would be survivors, but the outbreak's initial days were grim enough to turn most optimists into cynics. Talk of very high mortality rates; a rapid spread of the virus to the capital and beyond the borders in neighboring countries; and a palpable fear on the streets zapped the psychic energy of those of us who live and work here.

But there they were: people, weak and squinting in the bright sunlight but healthy, emerging from isolation wards. And not just the lucky few we expected, but more than 30% of those infected were surviving.

UNICEF sat down with an Ebola survivor, one of the earliest cases in the country – Kadiatou*. She met us on a main street in Conakry and walked us back to her home through scores of children playing football on muddy roads. We sat on plastic chairs in a circle while her mother hung the laundry behind us.

“I am a medical student, and in my work, I encounter many sick people.”

"When my Aunt would clean up ... I insisted that she wash her hands with bleach."

Kadiatou’s initial symptoms were typical of many illnesses—a sudden onset, pounding headache and high fever, followed by vomiting and diarrhea. Her knowledge as a medical student probably prevented Kadiatou from spreading Ebola to those caring for her. “When my Aunt would clean up my vomit, I insisted that she wash her hands with bleach.”

As part of our response to the Ebola outbreak, UNICEF has distributed many of the materials families are using to protect their family members, including over 350,000 bottles of chlorine, almost 1 million bars of soap and materials for disinfecting hospital rooms and victims’ homes.

A few days after Kadiatou tested positive for Ebola she was sent directly to the isolation ward in Donka hospital. The isolation center was busy. Families brought food to their sick relatives. And, “there were many journalists.” 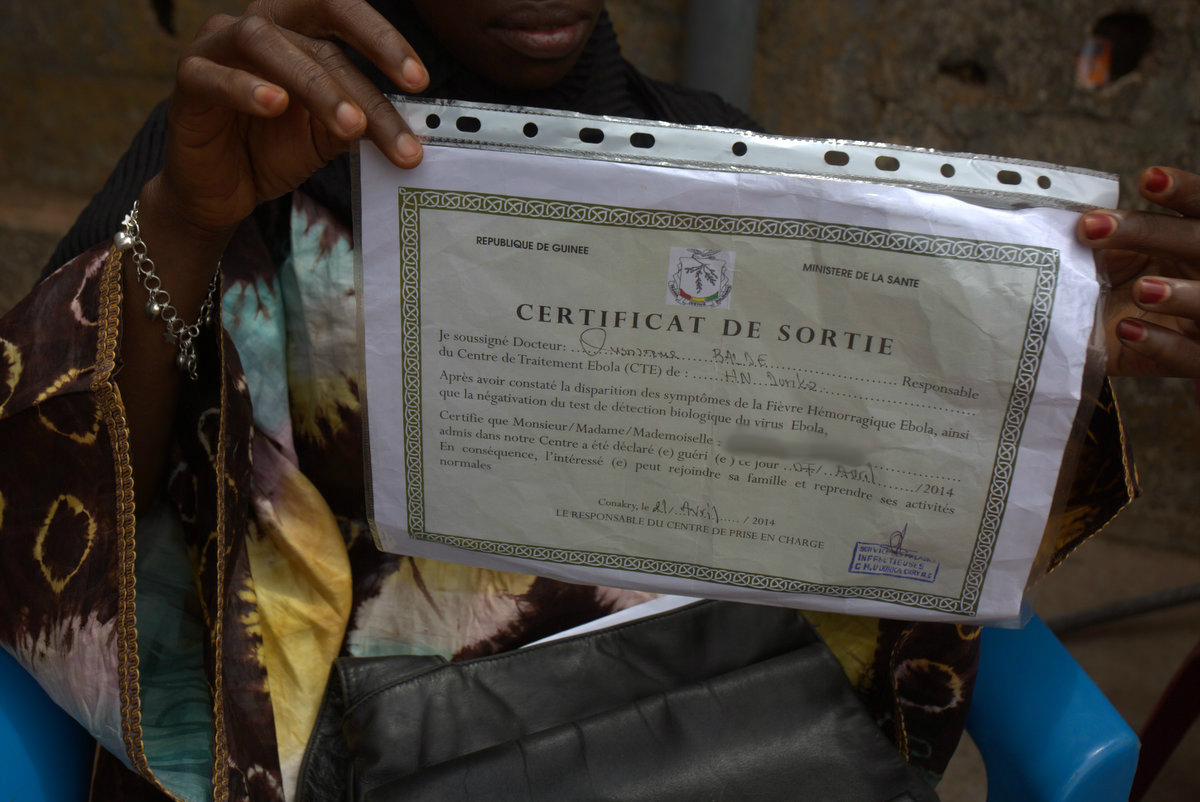 Kadiatou holds up the certificate declaring her healthy status. "Others call me, ‘Kadiatou the newborn’ — because I was given a second chance,” she says.  ©UNICEF Guinea/2014/Timothy La Rose

“In the beginning we were all in the same room. But as patients improved, they were separated from those who weren’t as fortunate. I first knew I was going to survive when I saw a patient recovering. I thought, ‘maybe it is possible for me too.’ For the first few days, I was desperate. I drank a lot of mineral water and had infusions … maybe it helped me to survive.”

"People don't believe that I had Ebola because they can't believe I survived."

After what must have seemed like an eternity for her, but in real time was a matter of weeks, Kadiatou was given new clothes and a certificate declaring her healthy and was sent home.

We asked her about the widely reported stigma that affected survivors. “When I went back to school, some of my friends avoided me, but it’s getting better. People don’t believe that I had Ebola because they can’t believe I survived.”

Of course, Kadiatou is aware that Ebola is real. But UNICEF remains vigilant in keeping the public informed. We have been in the markets, mosques, churches and schools and on the radio and the television providing information on Ebola so health workers and regular people are armed with the knowledge to protect themselves and their children. To date, UNICEF and our partners in Guinea have reached over 3.2 million people.