A Welcome in Romania for Ukrainian Children with Disabilities | UNICEF USA

A Welcome in Romania for Ukrainian Children with Disabilities

The staff at the residential placement center in Baicoi, Romania, had limited experience caring for children with disabilities before the group from Odesa, Ukraine, arrived on March 4.

In the weeks since, however, the team has found its footing with support from the community, neighboring centers and UNICEF.

As the head of the Baicoi center, Letitia Musat, explained, the Romanian staff are supporting the Ukrainian caregivers as they engage the children in activities, working with them in small groups, helping to make sure their needs are met, including any medical needs.

There are 27 children, ranging in age from 5 to 18. Most have intellectual disabilities.

"They've started to know Romanian words; we are already communicating," Musat said. "They reach out to us, are very open, very affectionate. I see improvements in their state, their behavior and attitude."

During a recent visit by UNICEF USA President and CEO Michael Nyenhuis, Musat shared a drawing the group had done together with some Romanian children, saying she was deeply touched by the greeting written at the top — a response to the question, "What do you wish for children of Romania?", to which the children from Ukraine replied, "Clear sky above your heads."

For a collective art project, Ukrainian refugee children include a wish for a 'clear sky'

"One thing I was so impressed with in Romania is the way that Romanian people have embraced the Ukrainian refugees who crossed over," Nyenhuis said in a radio interview. "Those open arms and that welcome is what we need to see here, too."

UNICEF is on the ground, working with partners to provide emergency humanitarian services for children and families devastated by the war in Ukraine — everything from safe water and medical supplies to remote education and refugee assistance. As of mid May, UNICEF had reached 206,544 children in refugee hosting countries with formal or non-formal education or early learning support as part of this emergency response. 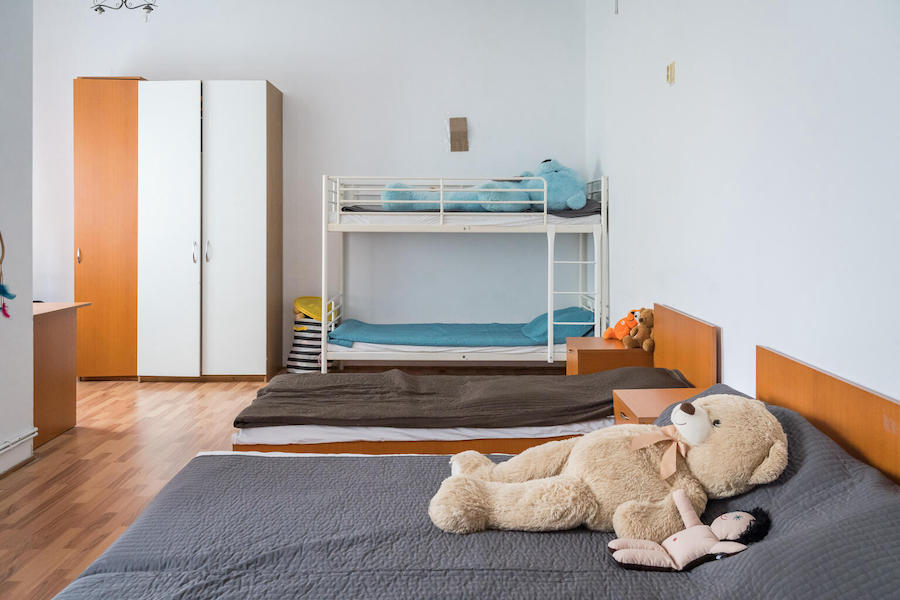 Children at the Baicoi center live in dormitory-style bedrooms. The center is accommodating 27 children with special needs evacuated from Odesa.

Both children in Ukraine and those now living as refugees in neighboring countries need urgent support. Your contribution can make a difference. Please donate.

Top photo: Children's artwork on display at the residential placement center in Baicoi, Prahova County, Romania. The facility recently reopened to take in 27 children with disabilities and their three caregivers who were evacuated from Odesa, Ukraine. Photos © Adrian Holerga for UNICEF. Video by Tong Su for UNICEF USA.