Victory At Last: NY finally passed the TVPJA & I was there to see it | UNICEF USA

Victory At Last: NY finally passed the TVPJA & I was there to see it

Flash back to three months earlier, when I was asked to help spearhead the TVPJA Advocacy Committee. The goal? To get this incredibly important piece of legislation to the floor of the Assembly, and to get it passed.

Although I had only recently started working in New York, I had heard murmurs of the politics and struggle of getting the TVPJA to the floor. In fact, it had been a political game of push backs and obstacles going on for three full years. But I kept on hearing other murmurs too; whispers that it was truly our year, that if we fought hard enough, we could see the light at the end of the tunnel.

And we fought hard.

Hard enough that out of the blue, we were told that on March 16th, the TVPJA would finally be put on the floor of the Assembly. With less than a week, Lauren Hersh of Sanctuary for Families and others were able to organize a full coach bus full of advocates, survivors, and community members who wanted to witness history happen.

I was lucky enough to be on that bus, and to take that journey upstate from Manhattan early that Monday morning. We greeted everyone with hellos and more than enough donuts in order to keep spirits high for the three hour ride ahead. Some areas of the bus were silent, while others were filled with chatter- survivors speaking about how overdue this day has been, colleagues sharing stories of how long they have been fighting for the TVPJA to get this far.

When we finally arrived in Albany, we took pictures with signs and each other- all of us grinning from ear to ear. We brought along enormous TVPJA posterboards, and proudly (as well as visibly) carried them along as we rushed through security and headed to Assemblywoman Amy Paulin’s office. Amy was the bill sponsor of the TVPJA, and was integral to getting it this far. For the last few years, even when all hope seemed to be lost, Amy refused to give up. It was just as much her day to celebrate as it was for everyone else. 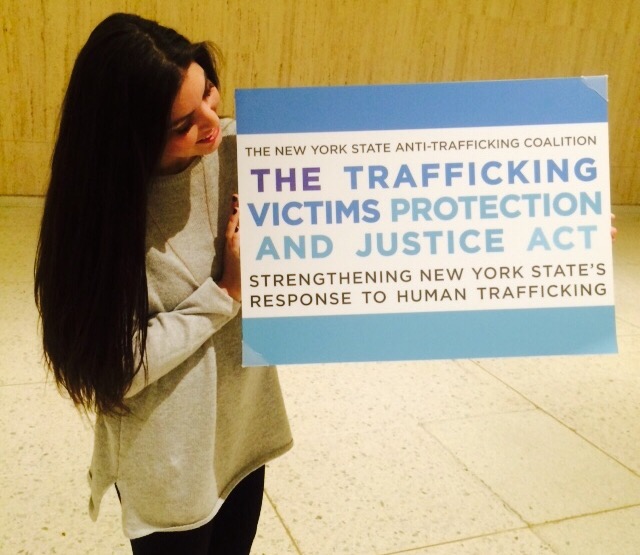 We flooded the Press Conference room - all 40 of us - wearing our purple T-Shirts (Thanks, Amy!) that showed solidarity and support for the TVPJA. During the press conference, colleagues that had been working on this bill for years reflected on their experiences.  New York State Assembly leadership echoed the need for its implementation. And more importantly than anything else, survivors bravely spoke about being trafficked right here in New York; their stories causing a silence so loud that if there was any single person in that conference room still doubtful of the need for the bill to be passed, that doubt had sincerely vanished by the end of their speech.

By the time we got to the NYS Assembly Gallery, I had a knot in my stomach. I had only been advocating for the TVPJA for a few months; as I turned to my right and then to my left, I saw faces of colleagues, mentors and friends who have been working to get this bill through for years. I couldn’t help but feel so incredibly proud of them, of us, of all of it. And I was humbled to be in their presence 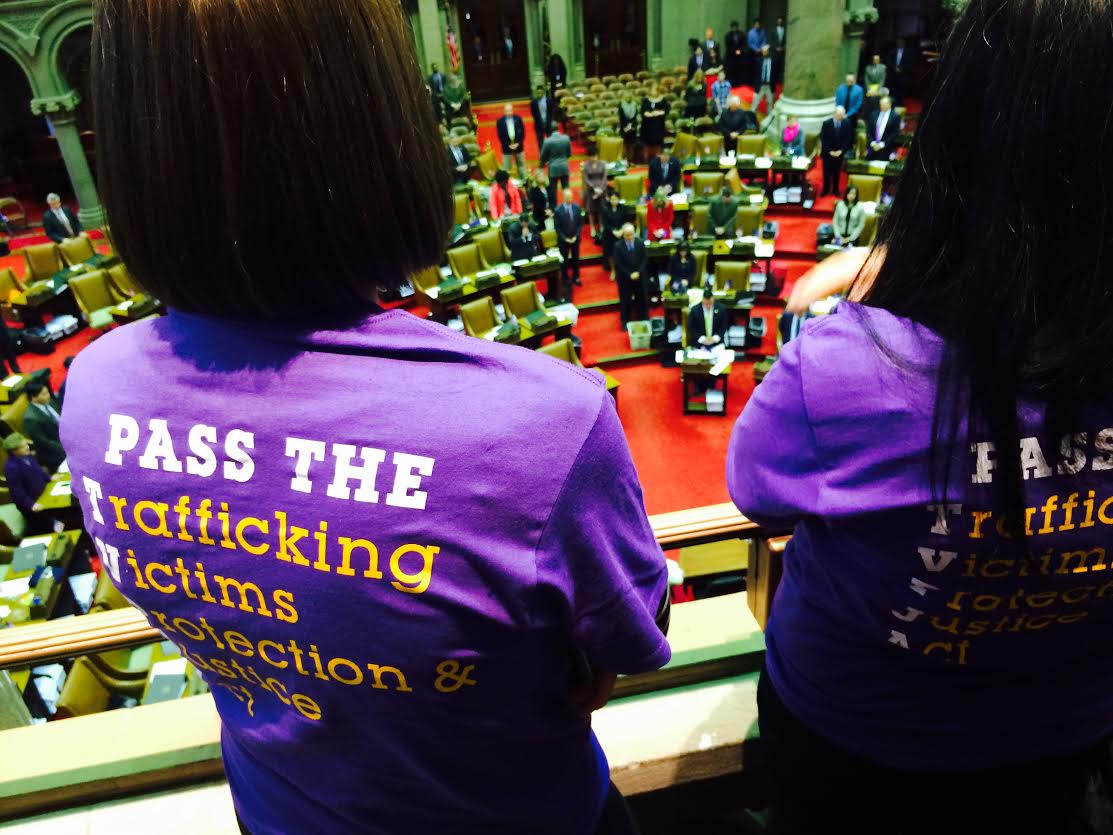 We anxiously waited for the bill to get to the floor. A sea of purple T-shirts and impatient faces looked below to our representatives. Finally, after what felt like hours (but was more realistically minutes), bill A506 was presented. For a split second or two, I wondered if some Assembly members would put up a fight. But just as quickly as that thought popped into my head, it dissolved once I began to hear all of the Assembly members affirming the bill, and advocating on its behalf.

When it got brought to a vote, our eyes focused on the screen ahead. One by one, we saw the green Y pop up next to an assembly member’s name, representing a “Yes” in favor of the bill. After nearly five minutes, the entire board was full of nothing but all green. The TVPJA had (finally) been passed unanimously.