For three enterprising Houston sixth graders, an original music video raising awareness about climate change led to a meeting with their Congresswoman — and a new understanding of the power of activism.

This World Children’s Day, UNICEF USA is celebrating youth changemakers as they reimagine a more equitable and sustainable world following the COVID-19 pandemic. Here in the United States, transitioning to the virtual space hasn’t stopped some of UNICEF USA’s youngest supporters from taking action and making their voices heard. Just ask Isabel, Maya and Bella, sixth graders from Houston, Texas who are using their extra time at home to raise awareness of the impacts of climate change on the world’s children and to raise money for UNICEF.

In a homemade music video created for a UNICEF arts contest, a trio of Houston sixth graders urge listeners to help save the planet

With the support and encouragement of their parents, the three friends have quickly become some of UNICEF USA’s most engaged and outspoken supporters. They were first introduced to UNICEF USA through an initiative of the Houston Regional Office called #CreateforUNICEF, a competition to represent UNICEF’s work through the arts. The girls wrote and performed an original song for a homemade music video, with Bella on guitar and Isabel and Maya on piano.

The girls’ competitive spirit and the opportunity to hone their musical skills initially led them to participate in the contest, but as they learned about UNICEF’s work with children around the world, they became motivated by the mission.

“At first, I really wanted to focus on the competition and our music video so we could win," says Bella, "but then I realized, once I did a lot of research about UNICEF, that they are just so incredible. They have done so much to help the world.” The girls’ music video about climate change is still in the running to win the competition.

Working with UNICEF broadened the girls' perspective from local to global

For Bella, Maya and Isabel, working with UNICEF USA broadened their understanding of the impacts of climate change from a domestic to a global challenge. For example, Isabel recalls, “When I was younger, I knew that climate change was a problem, but in fifth grade when we were doing virtual school, we did a project on polar bears … and it was just really sad to me how all the ice was melting, so I started researching more about climate change,” says Bella. “I was thinking, ‘Wow, climate change affects every living organism on our planet.’ If we don’t try to stop it, then everything in the future will be affected in a bad way.”

Climate change affects every living organism on our planet," says Bella, 11. "If we don't try to stop it, then everything in the future will be affected in a bad way.

When offered the opportunity to meet virtually with their Congresswoman, Rep. Lizzie Fletcher (D-TX), the girls jumped at the chance to share their passion for UNICEF and their ideas for addressing climate change.“We enjoyed speaking to Lizzie Fletcher and I think it was important to inspire others, so they can help try to pass laws and do different things to help with climate change," says Maya. The girls shared their recommendations with the Congresswoman: to reduce pollution and limit the use of plastic bags.Their meeting was featured in Rep. Fletcher’s email newsletter the following week.

Bella, Maya and Isabel hope leaders at all levels will take the impacts of climate change on their generation into account, especially the next U.S. President. "A lot of people listen to the president and trust their president," said Maya, "so if they are aware about climate change, then they can speak up about it, and people all across the world can learn about it and be inspired to help prevent climate change.”

When asked about the importance of engaging elected officials, Bella responded, “We can help stop climate change by picking up a piece of trash, but in the grand scheme of things that’s not that big. Politicians and Congresswomen and Congressmen, they can actually act and enforce laws to reduce climate change.” She added, “I think listening to children can have more of an impact sometimes because, most of the time they are probably talking to adults, and they are like ‘Okay, yeah sure, I got that, great,’ but when listening to children they can see, ‘Wow, okay this is actually important, I really need to do something about this.’ ” 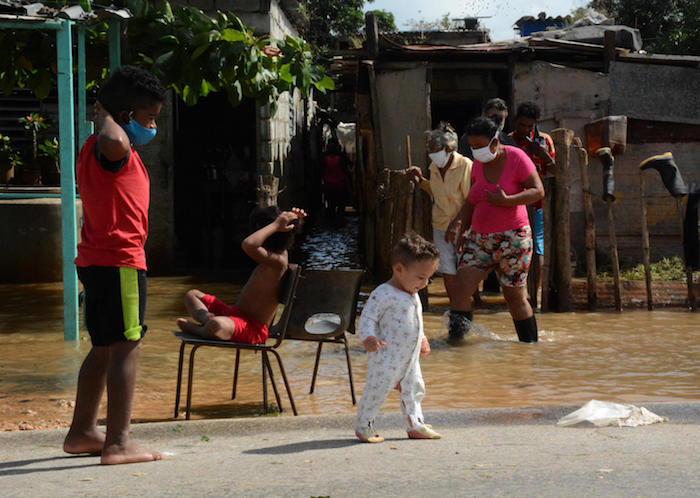 Climate change is making hurricanes and other seasonal weather emergencies more dangerous. The 2020 Atlantic Hurricane season has been the worst on record: 30 named storms, including powerful back-to-back hurricanes in November. Above, children in the province of Ciego de Avila, Cuba play on a patch of dry ground surrounded by floodwaters after Hurricane Eta battered the region, affecting at least 3.3 million people, including 1.2 million children. © UNICEF/UN0361674/Gutierrez

The value of young people participating in the political process and sharing their perspectives cannot be understated. Before children and young people are old enough to vote, their families can come together to discuss important issues and ways to safely connect with elected officials. Youth participation is critical to policymaking that solves today’s problems while also safeguarding and expanding opportunities for the next generation.

To join Bella, Maya and Isabel in their advocacy efforts to combat the impacts of climate change, click here to urge your U.S. Senators to co-sponsor the International Climate Accountability Act.

Top photo: For a UNICEF contest, Houston sixth graders Bella, Maya and Isabel created a music video urging viewers to take action to protect the earth from climate change. The video caught the attention of their Congresswoman, Rep. Lizzie Fletcher (D-TX), who invited them to a Zoom meeting. Top row, far right: Maya and her mom. Bottom row: Bella and her mom are at far left; Isabel is to their right. Rep. Fletcher is at far right, in red.