Here's a look back at some of the ways UNICEF delivered for children in 2019. 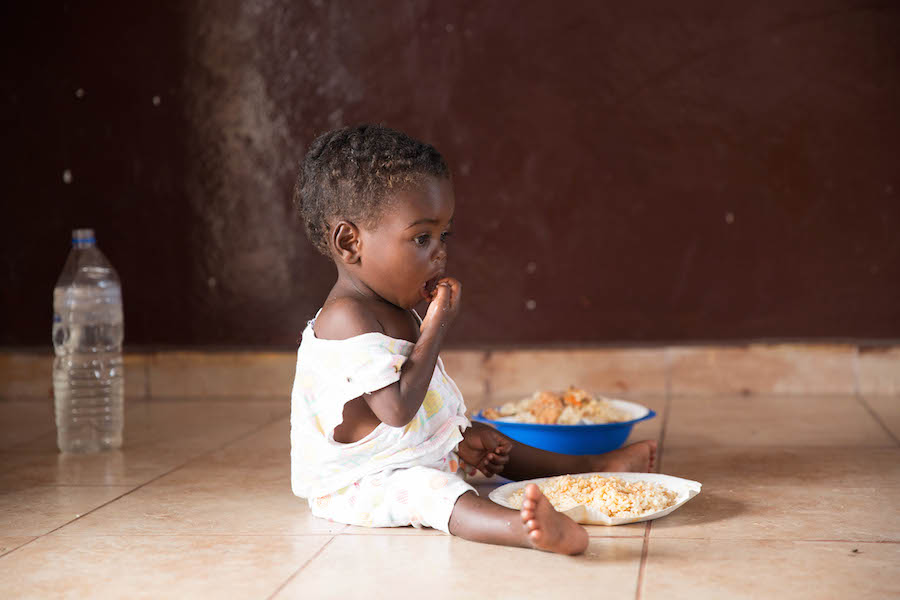 When Cyclone Idai hit Mozambique's port city of Beira in March — causing devastating floods — UNICEF quickly responded, bringing nutrition and other relief to displaced children like Marquer, above, and their families. UNICEF responds to about 300 emergencies every year. © UNICEF/UN0302076/Oatway

Providing for children displaced by conflict Mohammad, above, was born at the Azraq Refugee Camp in Jordan. His parents fled the conflict in Syria, and his father works as a shepherd to support the family. Mohammad received his measles, mumps and rubella (MMR) vaccine at the camp's health clinic on Feb. 25, 2019, his first birthday. UNICEF works with local partners to ensure that vulnerable kids like Mohammad are immunized and receive other services they need to survive and thrive. © UNICEF/UN0302535/Herwig

Protecting kids, wherever they are 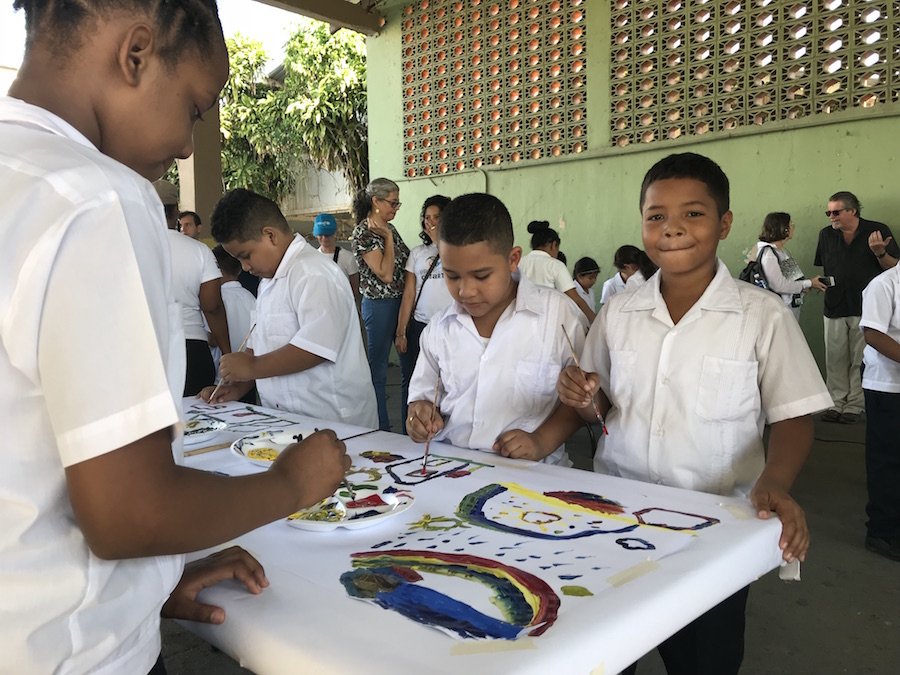 Above, students at Escuela Atenea in San Pedro Sula, Honduras, participate in a UNICEF-supported program that offers opportunities for kids impacted by violence or poverty — root causes of migration — to use art and music to work through the trauma. In 2019, UNICEF continued its efforts with local partners in the country to improve education, reduce violence in schools and address other issues that prompt many children and parents to attempt dangerous journeys north. UNICEF also works to protect kids in transit, empower them at their destinations and reintegrate those who return — while advocating for the policy changes needed to keep kids out of harm's way, wherever they are, and no matter how they got there. © UNICEF/Dineen 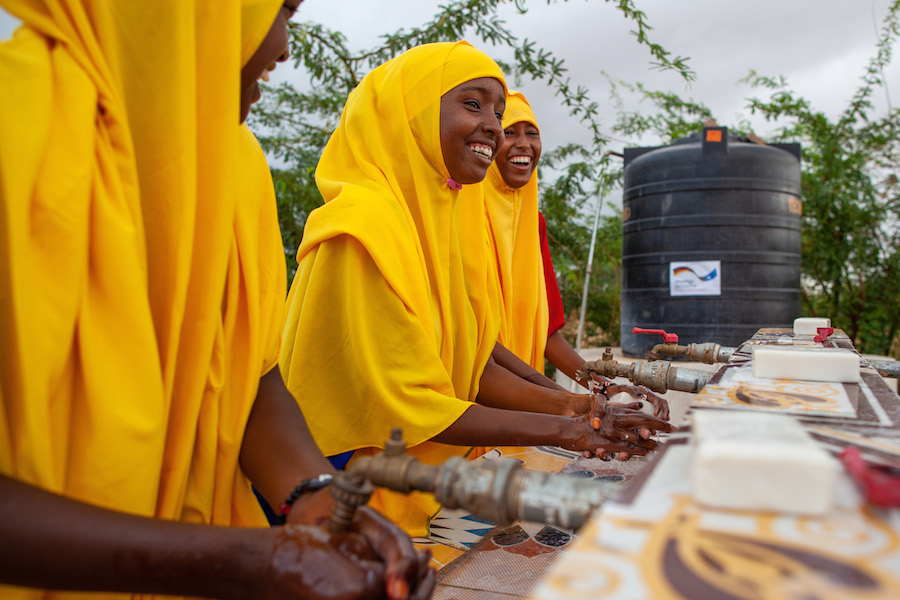 Above, students at Qansahley Primary School in Dollow, Somalia, wash up before lunch. In the first eight months of 2019, UNICEF provided 32.2 million people with improved access to safe water for drinking, cooking and personal hygiene — all critical for preventing the spread of waterborne diseases such as cholera, and keeping kids healthy, strong and in school. © UNICEF/UNI226033/Naftalin

Innovating for education — while helping the environment Construction of a new classroom using bricks made of recycled plastic is cause for celebration in Côte d'Ivoire — a country where schools are chronically overcapacity, leaving some 2 million children with no place to learn, and where pollution is a serious environmental issue and public health hazard. In July 2019, UNICEF and partner Conceptos Plásticos, a Colombian social business, broke ground on a factory that will produce the bricks using plastic waste collected in and around Abidjan. The goal: use the material to build 500 more classrooms and expand from there. © UNICEF/UN0288511/Dejongh 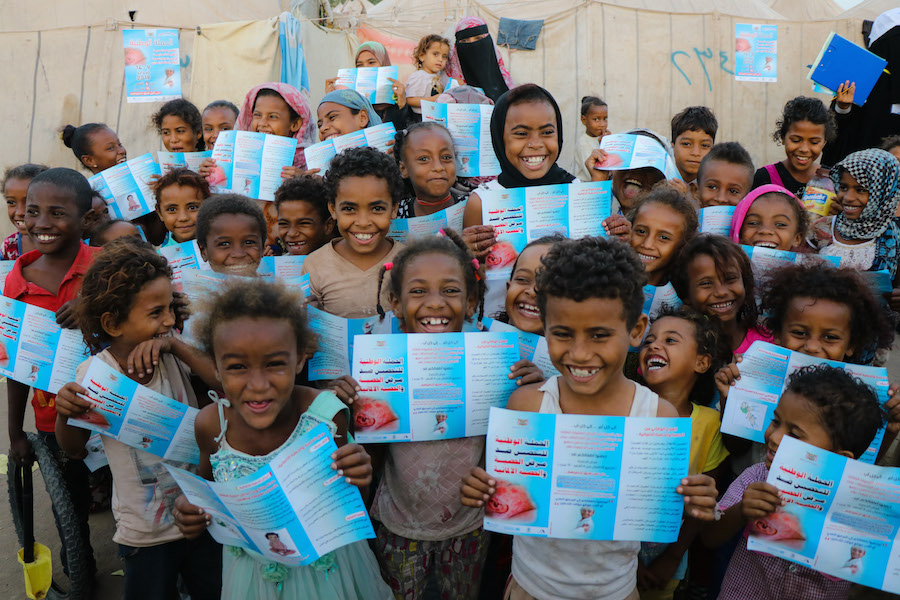 Above, kids in Aden, Yemen, hold up a UNICEF-provided brochure that explains the safety and efficacy of the measles and rubella vaccine. Years of conflict in Yemen have left millions displaced, deprived and vulnerable to vaccine-preventable diseases. With measles making a comeback across the globe, UNICEF and partners stepped up efforts in 2019 to make sure all children are protected. © UNICEF/UN0284432/Fadhel

Filling a void left by Ebola 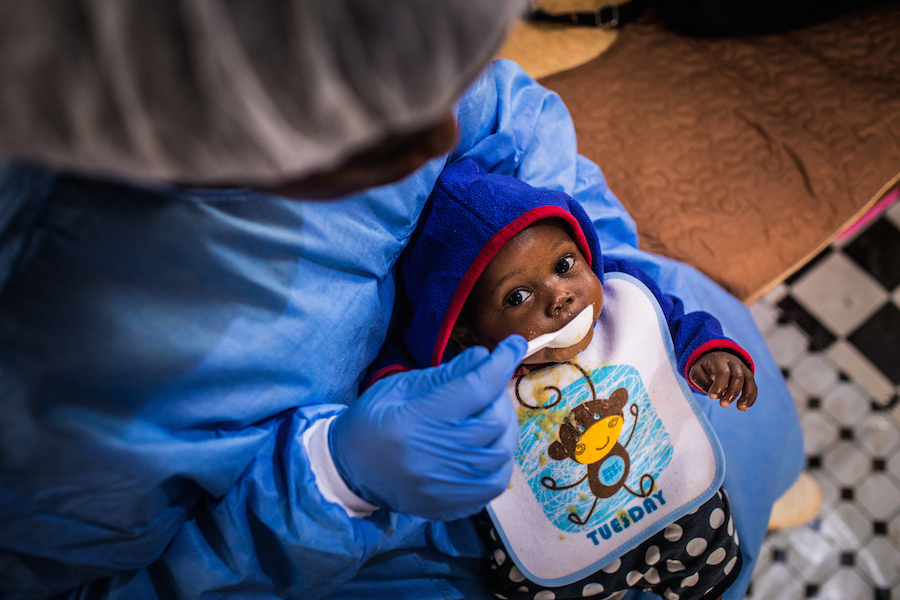 Above, a UNICEF-supported caregiver in the Democratic Republic of Congo feeds a baby whose mother has died after being infected with the Ebola virus. UNICEF and partners have opened nurseries next to Ebola treatment centers in Beni and Butembo, where Ebola survivors, themselves virtually immune to the virus, have become caregivers for the littlest children, providing the love and attention they need in their parents' absence. © UNICEF/UNI232068// Vincent Tremeau Above, Torres, 10, speaks with UNICEF’s Regional Emergency Specialist Hanoch Barlevi amid the ruins of his classroom at Central Abaco Primary School, which became a temporary shelter for displaced families in the aftermath of Hurricane Dorian, the strongest and most destructive hurricane in Bahamas history. Torres lost his father, his home and all his possessions. © UNICEF/UN0342041/Moreno Gonzalez 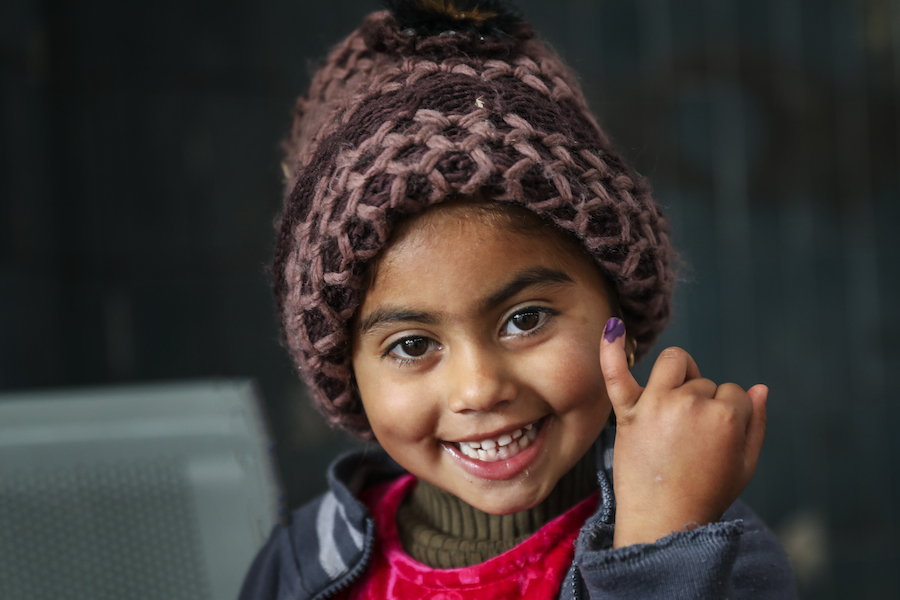 With success in sight for the global campaign to eradicate polio, UNICEF continued its immunization efforts with partners, addressing vaccine hesitancy through region-specific strategies. Above, Ajwa, 4, photographed on Jan. 23, 2019 at Lahore Railway Station in Punjab Province, Pakistan, shows the ink mark on her finger that confirms she has received her vaccine protecting her against the disease. © UNICEF/UNI217677/Zaidi

Top photo: Schoolchildren in Côte d'Ivoire, where a new classroom is being constructed out of recycled plastic bricks. © UNICEF/UN0341012/Frank Dejongh