Imagine ... despite being the only country in the world that has not ratified the United Nations Convention on the Rights of the Child, the United States has cities dedicated to addressing issues affecting youth in a model established for young people by young people. Cities that are creating environments where every child is able to survive, grow and thrive. Where decisions are made by centering what’s best for the children and youth of that community through the lens of their current and future reality.

These cities are part of the Child Friendly Cities Initiative (CFCI), a UNICEF-led framework that supports local governments in the comprehension and implementation of the rights given to children and young people by the Convention on the Rights of the Child. Since its launch in 1996, CFCI has been adopted by more than 3,000 municipalities in over 40 countries.

In cities across the U.S., young people are leading change based on their own priorities. The CFCI model moves away from the belief that change can only be enacted from the top down to one that centers the voices of young people in each community.  Alexavier Mendoza, 16, a 2022-2023 National Youth Council Member who is a part of Houston’s CFCI Youth Council, says “UNICEF is investing in us.” 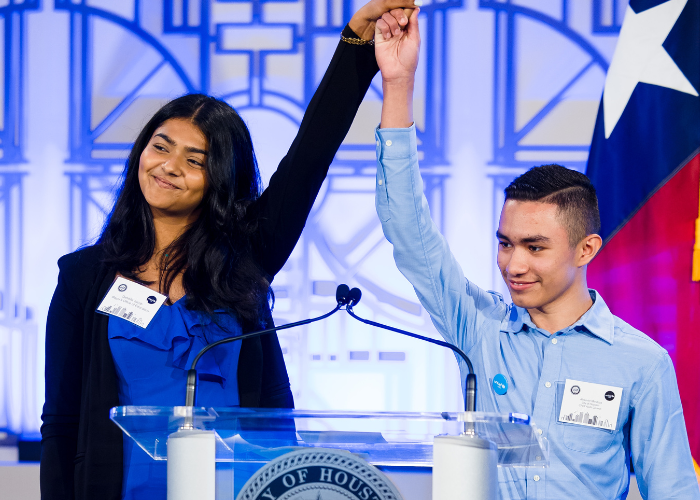 Daniella Jacob, a summer intern in the City of Houston Mayor's Office of Education and one of UNICEF USA's Central Plains advocacy leads, left, and Alexavier Mendoza, a member of Houston's Child Friendly Cities Initiative Youth Council and the 2022-2023 UNICEF USA Youth Council, celebrate Houston's progress toward designation as the first child-friendly city in the U.S., according to the CFCI framework. © Hung L. Truong Photography

In Houston, the first of five CFCI pilot cities and one county in the U.S. to earn the designation as a Child Friendly City Candidate upon adopting their CFCI local action plan, stakeholders are working together to ensure that children and young people are recognized not as passive beneficiaries who need to be cuddled and cared for, but as full-fledged social actors with the capability of shaping their world.

The goal is to ensure that young people are offered their rightful seat at the table and the opportunity to engage in meaningful ways in the life of their community.

Prioritizing children's quality of life and safeguarding their future

CFCI stakeholders in Houston are committed to shaping a government in which policy decisions are informed by the input of children and young people. Around 85 high school students serve as members of the Houston CFCI Youth Council, school liaisons and ambassadors. They have focused on issues including mental health, emergency preparedness and youth involvement. Issues they care about deeply. Does your community have that?

Approximately 500 more children and young people in Houston have contributed to CFCI through community discussions. Across the country, UNICEF USA estimates that 2,000 young people have advocated for issues that are important to them through CFCI in their cities, a number UNICEF USA hopes to grow through additional community engagement efforts.

For there to be meaningful youth engagement, we must work collectively to ensure our own communities adopt the inclusive mindset piloted by the leaders in the first cohort of CFCI cities. That’s the definition of a child-friendly city — a place that centers the quality of life of children and young people and safeguards their future.

It's creating a culture in local municipalities and communities that prioritizes the dignity and right to health, survival and development for every child. It is taking action to secure the rights of every child in every city to turn the world UNICEF Blue.