The recently released Water Under Fire Volume 3 documents how attacks on water and sanitation facilities in war-torn countries are endangering the lives of millions of children — and are a much greater threat than the violence itself.

Children's access to safe water has been undermined in nearly every conflict-related emergency UNICEF is responding to — and in many of these conflicts, more children die from diseases linked to unsafe water than from direct violence, UNICEF concludes in a new report.

According to UNICEF's latest assessment, an estimated 48 million people in Central African Republic (CAR), Syria, Yemen and six other countries are in urgent need of safe water and sanitation services.

In Water Under Fire Volume 3, UNICEF brings attention to the impacts children suffer when these essential services and related infrastructure are damaged and destroyed, whether the damage is deliberate or incidental to the fighting. 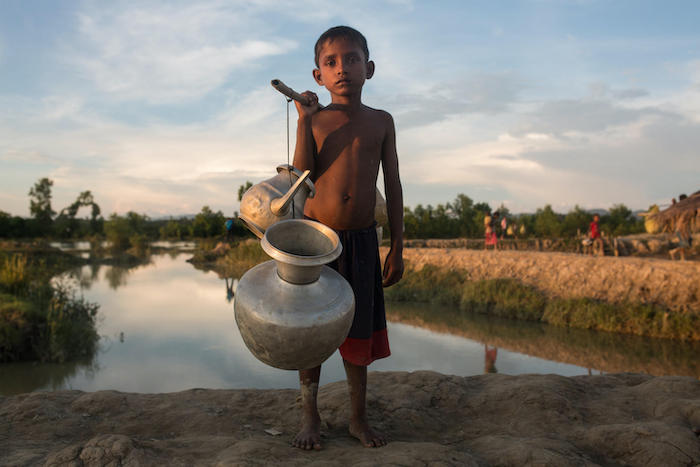 Mohammed, 10, is one of hundreds of thousands of Rohingya refugees from Myanmar living in a camp in Cox's Bazar, Bangladesh, where UNICEF works with partners to ensure access to safe water amid challenging conditions. © UNICEF/UN0135716/Nybo

When access is cut off, children are often forced to rely on unsafe sources. This increases their risks of contracting diseases like cholera, which can be fatal, especially in very young children and children whose immune systems are weakened by malnutrition.

“The odds are already stacked against children living through prolonged conflicts — with many unable to reach a safe water source,” UNICEF Executive Director Henrietta Fore says. “The reality is that there are more children who die from lack of access to safe water than by bullets." A young girl carries water through the streets of Aleppo, Syria where attacks on water and sanitation services have been a signature of the country's decade-long armed conflict. © UNICEF/UN01254/Romenzi

There are other risks and potential ripple effects on education, future development and well-being. During war, kids — typically girls — are often tasked with fetching water for their families, which can leave them vulnerable to sexual violence and abuse and interfere with their schooling, further jeopardizing their future development and well-being.

Safe and sufficient water is fundamental to hygiene and survival

In Water Under Fire, UNICEF's Director of the Office of Emergency Programs, Manuel Fontaine, writes that the COVID-19 pandemic has "reminded us that in conflict-affected contexts, where water may already be scarce, everything possible must be done to protect water and sanitation personnel, systems and services. Access to safe water and sanitation for all has perhaps never been more urgent. And it is achievable — provided we work together, respect the rules of war and hold each other to account when systems fail." 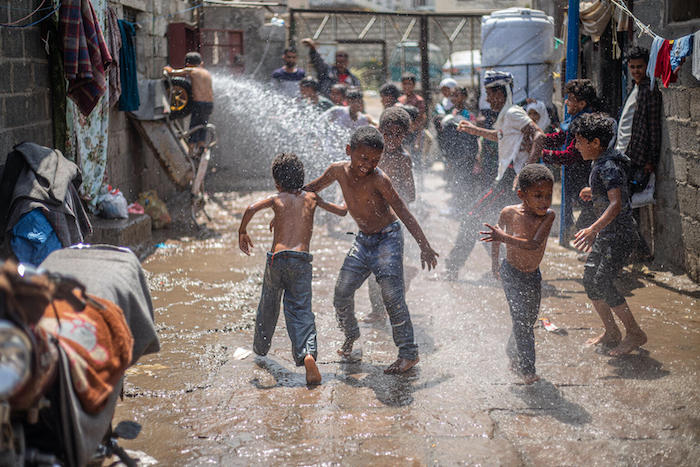 UNICEF and partners restored health and hope to displaced children staying at a camp in Ibb, Yemen, by rehabilitating a nearby water pump. Read more about UNICEF's efforts in Yemen to ensure access to safe water and sanitation to children and families who have long suffered the effects of the country's ongoing conflict and humanitarian crisis. © UNICEF/UN0462456/Gabreez

UNICEF also works with partners to strengthen local infrastructure and build local capacities to support critical water and sanitation services over the long term. A key priority is to control and prevent the spread of disease in homes, schools, health facilities and other public spaces. UNICEF often trains local utility operators and others in how to build and maintain resilient systems, collaborating with governments and other partners to ensure that the needs of even the hardest-to-reach families are met.

In 2020, UNICEF provided critical WASH services and supplies for 106 million people in 120 countries as part of its global COVID-19 response

In Water Under Fire, UNICEF urges all parties to conflict to refrain from attacking, looting and otherwise interfering with water and sanitation services and infrastructure, while calling on states to condemn such attacks — and if/when they do happen, to take steps to minimize their impact on children.

Top photo: Ashwaq, 14, whose family was displaced from Saada, Yemen, carries water in the Khamir settlement in Amran. Ashwaq has eight brothers and sisters. “We beg to eat. I would like to go back to Saada one day where everything was easier. Our life here is difficult and humiliating.” © UNICEF/UN073964/Clarke for UNOCHA