Millions of Syrians spent another Ramadan praying for the day they can go home again. UNICEF is on the ground helping.

Eight long years of conflict have taken their toll on Syria and its citizens. 2018 was the deadliest yet for children caught up in the endless civil war. Schools, hospitals, homes and water treatment facilities have been destroyed. An estimated 11.7 million people — including 5 million children — in Syria have have been affected by the violence. Some 2.5 million children are living as refugees in neighboring host countries.

How will UNICEF help Syrian children in 2019? 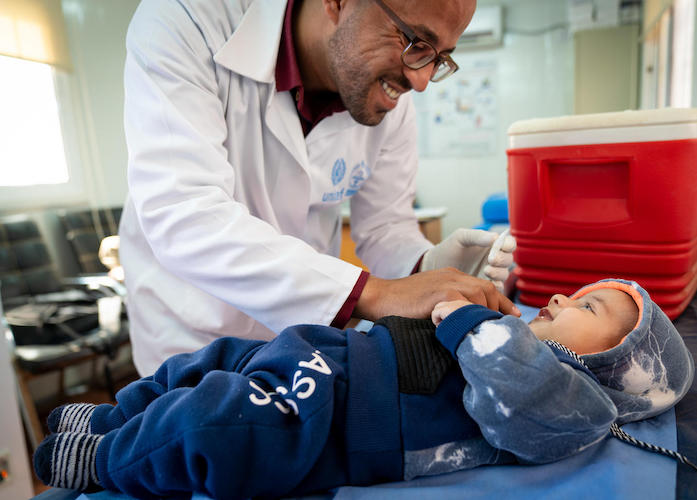 In April 2019, Dr. Almanti, Ministry of Health coordinator, vaccinates 4-month-old Malek in the UNICEF-supported health clinic in Azraq Refugee Camp in Jordan. Malek was born in the camp. His family came to Jordan from Raqqa, Syria three years ago. © UNICEF/UN0303622/Herwig In schools in Aleppo, students are taught how to move safely around the city. They are told, among other things, to avoid alleys and to stay in the middle of the road to avoid stepping on unexploded ordinance or landmines, which could cost them their life. A few years ago, children were advised to walk close to the buildings so they wouldn't be easy targets for snipers. © UNICEF/UN0287091/Grove Hermansen

In January 2019, children and families huddle together after being forced out of their homes by violence in eastern rural Deir-ez-Zor, before beginning the arduous journey to safety at Al-Hol camp, almost 186 miles away. UNICEF distributed winter clothing kits and thermal blankets to keep children warm. At the camp, UNICEF is providing health care services and malnutrition screening, and ongoing tracking and family reunification support. © UNICEF/UN0277728/Souleiman

Reach more than 1.7 million children between the ages of 5 and 17 with education services 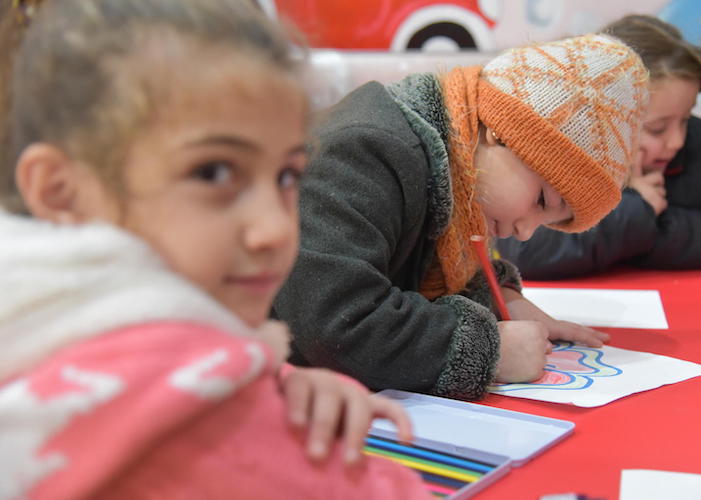 Five-year-old Fatme (center) enjoyed her first day of UNICEF-supported preschool in Aleppo, Syria in 2019. She's looking forward to starting in the 'real' school where her older brothers are enrolled. © UNICEF/UN0287087/Grove Hermansen

Top photo: On May 5, families fleeing violence in Idlib, Syria, take shelter in an olive grove near the Turkish border. © UNICEF/UN0309707/Watad