For UNICEF, Helping Child Refugees Is a Global Mission

Ukraine’s refugee crisis is but one of many examples of how forced displacement is endangering the health, safety and future well-being of a growing number of the world’s children.

There are now over 100 million people who have been forced to flee their homes, a record number, according to UNHCR, the UN refugee agency. Leading causes include widespread food insecurity, the climate crisis and multiple emergencies and humanitarian situations from Africa to South Asia to South and Central America.

UNICEF estimates there are 36.5 million child refugees and migrants — children running from war, civil conflicts and gang violence; children living in extreme poverty who set out, often on their own, in search of a better life.

Children are also uprooted when monsoon rains lead to massive flooding, or when chronic drought pushes a country or region to the brink of famine.

UNICEF works with partners to support the needs of refugees and migrants as they pour into shelters, settlements and reception facilities — providing safe water, adequate sanitation and hygiene supplies to curb the spread of disease; ensuring sufficient access to health and protection services; screening for, and treating malnutrition; creating learning opportunities for out-of-school children; addressing increased risks of gender-based violence for women and girls.

In many cases, the countries refugees are fleeing to are already struggling with their own challenges and hardships. Refugee host communities can quickly become overwhelmed and unable to manage the influx. UNICEF works to mitigate these impacts on already vulnerable populations; to build 'shock-responsive' systems to shore up and sustain essential services, coordinating closely with local, national and regional partners. There are programs that bring refugee and local adolescents together in an effort to bridge cultural gaps and empower youth to be agents of change.

Here is a look at some of the many ways in which UNICEF is responding to child refugee and migrant crises happening all around the world. The escalation of war in Ukraine in late February of this year triggered the world’s worst refugee crisis since World War II in terms of speed and scale. Two out of three children in Ukraine have been uprooted. In less than three months, some 6.5 million people fled to neighboring countries — including almost 3 million to Poland — and beyond, while another 8 million people were displaced inside Ukraine.

Caring for children's mental health is a key part of UNICEF's humanitarian response. Since Feb. 24, UNICEF and partners have reached nearly 500,000 children and caregivers with mental health and psychosocial support to help them recover from the shock of war and have provided case management and referral services to over 46,000 children.

These and other services are being provided through a network of Blue Dots, refugee support centers jointly established by UNICEF and UNHCR in close coordination with local partners. Above, Paloma Escudero, UNICEF Director of Global Communication and Advocacy, visits with a child inside a Blue Dot center in Krakow, where, like other Blue Dots, there is a safe space for children to play games, draw, make music and just be kids again. 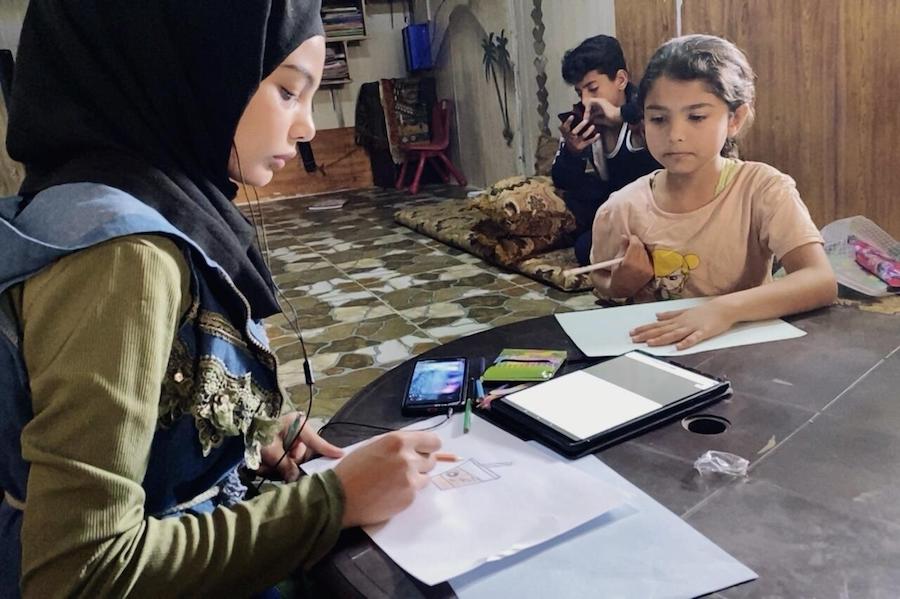 The Syrian refugee crisis began over a decade ago with the outbreak of a civil conflict that continues to this day. An estimated 2.7 million Syrian child refugees are currently living in Egypt, Iraq, Jordan, Lebanon and Turkey.

UNICEF has been on the ground in Syria since Day One of the conflict, supporting the needs of those displaced by fighting — in many cases, more than once, as clashes engulf different regions at different times. UNICEF's ongoing response in Syrian refugee host countries includes meeting both emergency and long-term needs of all vulnerable children and families. UNICEF reaches refugee children living in camps, informal settlements and urban settings — as well as vulnerable children from host communities — with essential education, WASH, child protection, health, nutrition and social protection services, and adolescent and youth programs.

Expanding opportunities for education and skills training has long been a major focus. Digital skills training programs for young women are helping to break down gender barriers and open up opportunities for future employment. During the COVID-19 pandemic, UNICEF provided refugee children living in informal tented settlements in Jordan with computer tablets and data bundles to support their shift to distance learning. Above, Hala, 15, and her sister watch a video on painting techniques using the Learning Bridges program, in their home in the Za'atari Refugee Camp in Jordan. Jordan's Ministry of Education implemented the innovative blended learning program, with support from UNICEF, to help 1 million students from Grades 4-9 recover and accelerate their learning following pandemic disruptions.

ROHINGYA REFUGEES FROM MYANMAR IN BANGLADESH 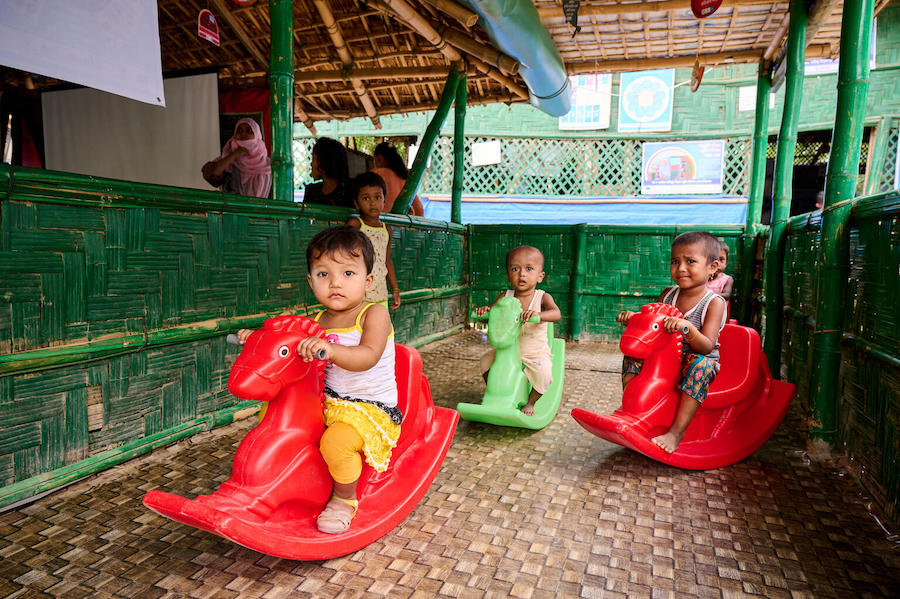 Above, young children play in the waiting area of a UNICEF-supported integrated nutrition facility, a dedicated space for children to play in Rohingya Refugee Camp-15, Jamtoli, Cox's Bazar, Bangladesh.

There are more than 895,000 Rohingya refugees living in Cox's Bazar, Bangladesh, including over 456,000 children. Most refugees arrived in 2017, when brutal clashes triggered a mass exodus of members of Myanmar's Muslim minority.

UNICEF has been on the ground in Bangladesh since the beginning, providing lifesaving services for Rohingya children and their families and supporting host communities affected by the refugee influx. The COVID-19 pandemic, recent fires at the refugee camps, a surge in cases of cholera and acute watery diarrhea (which can be deadly for children), monsoon floods and landslides have made difficult living conditions worse, especially for women and children.

UNICEF's activities in Bangladesh in 2022 are focused on mitigating pandemic and disaster impacts, both direct and indirect. Priorities include the safe reopening and operation of learning centers for refugee children; building and maintaining resilient water, sanitation and hygiene (WASH) systems and practices; enhancing primary health care, including improving immunization coverage; and expanding the community-based nutrition program. UNICEF also runs programs that address gender-based violence, and that aim to strengthen social ties between refugee and host communities. 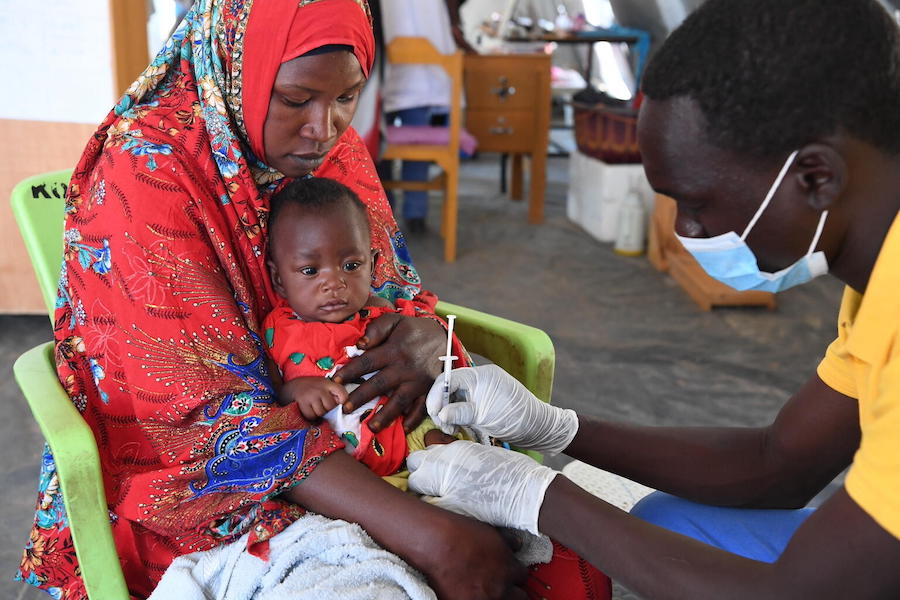 There are several countries in Africa harboring refugees from other countries on the continent. In the Central Sahel and Lake Chad Basin areas, in Central African Republic, Democratic Republic of the Congo and parts of Cameroon, entire communities are caught in the middle of unrelenting conflict, triggering massive displacement both internally and across borders and increasing vulnerability to human rights violations and sexual and gender-based violence.

Some 450,000 refugees are living in Tanzania, Rwanda and Zambia, including 230,000 children on the move from Burundi and the DRC. The more than 520,000 refugees residing in Chad — a country with its own humanitarian needs and displacement issues — include children and women from Sudan, itself home to tens of thousands of refugees from Ethiopia along with hundreds of thousands of South Sudanese.

At the same time, access to essential health services remains limited. Even before the pandemic disrupted routine vaccinations and other essential services, the West and Central African region had the lowest childhood vaccination coverage in the world, with only 1 in 3 children receiving their recommended immunizations. Children who are on the move are among the most at risk of missing out.

UNICEF works with partners to close dangerous immunity gaps, incorporating vaccination campaigns as a key component of humanitarian aid efforts for refugees. Above, Hawa Ahmad, a 25-year-old mother of five children who fled Sudan in 2020, holds her youngest, 5-month-old Latifa, as she receives her routine immunizations at a UNICEF-supported health center at the Darfur refugee camp in Kouchagui Moura, near Abeche, east Chad. Violence, climate shocks, food insecurity and increasing inequity in Mexico and Central America have created multiple and complex humanitarian situations affecting millions of children — all of which were compounded by the health and socioeconomic impacts of COVID-19, and all of which fueled sharp increases in cross-border migration.

And more and more child migrants are traveling unaccompanied; for many unaccompanied adolescents — facing death threats and recruitment by gangs at home — fleeing is often the only viable option to survive. Over 132,000 unaccompanied children were apprehended at the southwestern border of the United States between October 2020 and August 2021, representing a fourfold increase compared with the same period the year prior.

Many children and families migrating north from countries such as El Salvador, Guatemala and Honduras have landed in shelters in Mexico, many for extended periods of time, as they await opportunities to apply for asylum in the U.S.

UNICEF’s humanitarian strategy in Central America and Mexico is to reinforce coordination among countries and provide humanitarian assistance and protection to the most vulnerable children, adolescents and women, wherever they are. UNICEF works with partners to deliver services including safe water, nutrition, health care and mental health support, while also working to address root causes of migration in countries of origin, and helping countries and communities located along migration routes build their capacities to better manage migration flows.

UNICEF aims to reach hundreds of thousands of children and families on the move with services in 2022 — migrants, returnees, displaced and children in migrant host communities. Above, UNICEF staff members attend to health care needs of migrant children and pregnant women in Tapachula, Chiapas, on the Mexico-Guatemala border. 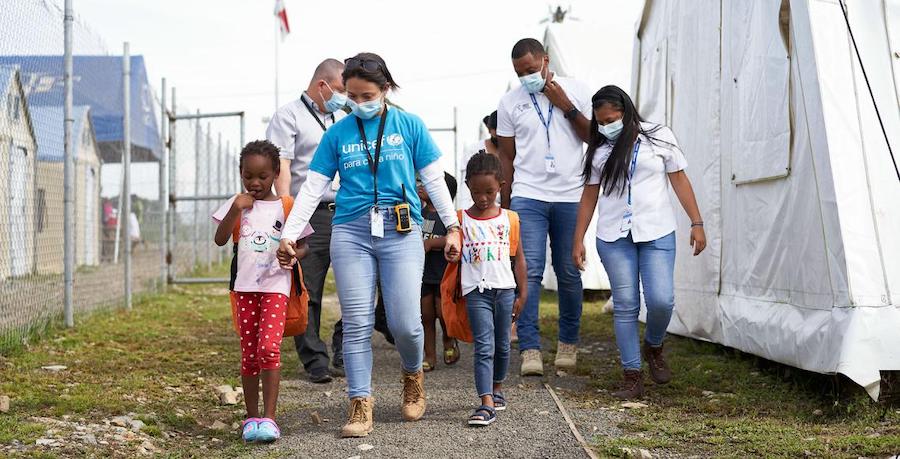 More and more children are migrating through the Darien Gap, a dangerous jungle that connects Colombia and Panama. Many are the children of Haitian migrants who have been on the move for years, having migrated to South America following Haiti's 2010 earthquake, which devastated the country. Others migrated after Haiti's 2021 earthquake, amid political strife and a surge in gang violence, which, combined with pandemic-related hardships, have exacerbated already difficult living conditions for much of the population.

Above, two Haitian migrant girls are accompanied by a UNICEF staff member on their way to reunite with their parents in Panama; the family had become separated while in transit. 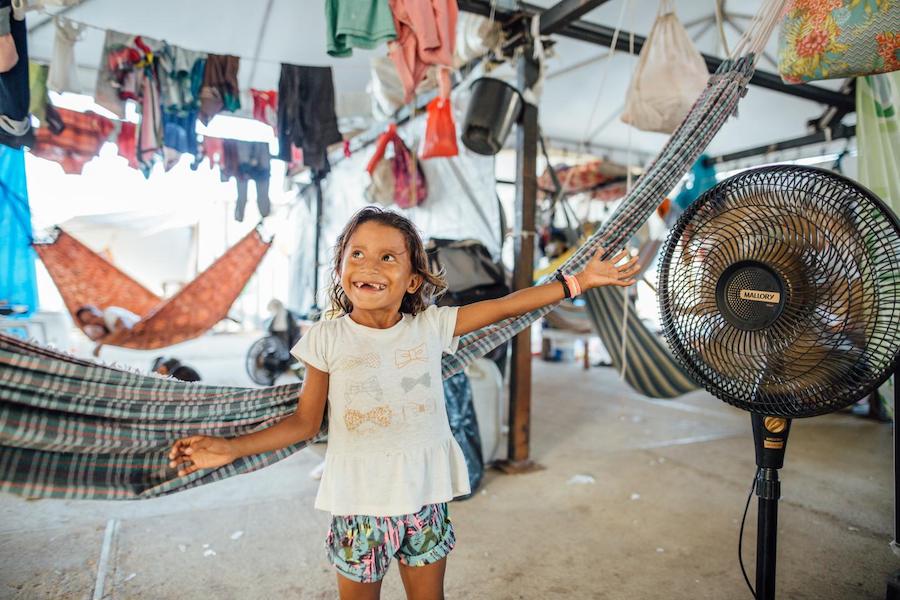 Venezuela is a country mired in economic and social crisis. There are 5.7 million Venezuelans on the move worldwide, most migrating out of desperation to escape chronic economic and social crises in their home country to neighboring countries in South America (Brazil, Colombia, Ecuador, Guyana) and elsewhere in Latin America and Caribbean. Their destination countries, most wrestling with many of their own humanitarian challenges, provide limited livelihood opportunities and poor access to health, nutrition, education, WASH, child protection and gender-based violence (GBV) services.

Children and adolescents on the move, especially girls and those unaccompanied, are highly vulnerable — and often encounter — different forms of violence, abuse, exploitation and neglect, including trafficking, recruitment by armed groups and forced child labor.  UNICEF and partners work to mitigate these risks by connecting vulnerable migrants to lifesaving services and support. Above: Dayse, whose family, members of Venezuela's Warao indigenous community, migrated from Venezuela in 2018, has been staying at a UNICEF- and government-supported shelter in Boa Vista in Brazil's Roraima state, where she was able to get treatment for severe malnutrition.

On World Refugee Day, celebrated on June 20 each year, UNICEF celebrates the strength and courage of those forced to flee their homes to escape persecution, war or violence. Support UNICEF's mission to protect the rights of all vulnerable children on the move. Donate today.

Top photo: Soyaib, 14, center, a Rohingya refugee from Myanmar, sits with two Bangladeshi friends he met at a UNICEF-supported social hub, 16-year-old Jamal and 15-year-old Arifur. In Cox's Bazar, Bangladesh, home to hundreds of thousands of Rohingya refugees from Myanmar, UNICEF has helped create social hubs where Rohingya and Bangladeshi adolescents alike can play sports, improve their computer literacy skills, participate in leadership workshops and peer-to-peer activities, learn how to be social agents of change — and make friends. The program aims to enhance peaceful co-existence among adolescents and youth, to strengthen social cohesion and bridge gaps between Rohingya and Bangladeshi communities. © UNICEF Bangladesh/2021/Maria