UNICEF in Eastern and Southern Africa

Children in Eastern and Southern Africa are facing acute malnutrition, thirst and displacement at alarming rates. Their lives are at risk. UNICEF is working with governments and other partners to address urgent needs.

All across Eastern and Southern Africa, children are going hungry.

Dought, floods, conflict and other factors are disrupting and endangering millions of lives in the region, contributing to rising food insecurity — and a corresponding surge in child malnutrition. On May 25, 2022, 8-month-old Ibrahim sits on his grandmother's lap at UNICEF-supported Banadir Hospital in Mogadishu, Somalia, where he is being treated for acute malnutrition and cholera. Malnourished children are more susceptible to disease — and have a harder time fighting it off. Cholera is a waterborne illness that spreads quickly through communities lacking safe water and adequate sanitation. © UNICEF/UN0644290/Fazel

The situation is especially dire in the Horn of Africa — particularly in parts of Ethiopia, Kenya and Somalia, where hardships have only intensified after four consecutive failed rainy seasons. It is estimated that 29.1 million people in the three countries are in need of urgent humanitarian assistance — including at least 1.7 million severely wasted children who require emergency lifesaving nutrition support.

Impoverished areas in other countries nearby are heavily impacted as well. In Karamoja, one of Uganda’s poorest regions, for example, drought among other natural disasters, plagues and raids by armed cattle thieves have made it more challenging than ever for families to access the food and water they need to survive, putting tens of thousands of children’s lives at risk. UNICEF is responding to the crisis by working to reach as many children in need as possible with treatment for acute malnutrition — while also bracing for a substantial increase in the cost of Ready-to-Use Therapeutic Food (RUTF), another consequence of soaring food and fuel prices. UNICEF is the world's largest supplier of RUTF, a nutritious peanut paste that helps children gain weight quickly.

With other emergencies around the world dominating news headlines, the multiple crises playing out across Eastern and Southern Africa can be easily overlooked — and underfunded.

“We must not wait for thousands of children to die before acting," said Sacha Westerbeek, Chief Strategic Communication and Partnerships at UNICEF Uganda, during a recent appeal for support. "We have said ‘never again’ too many times.” 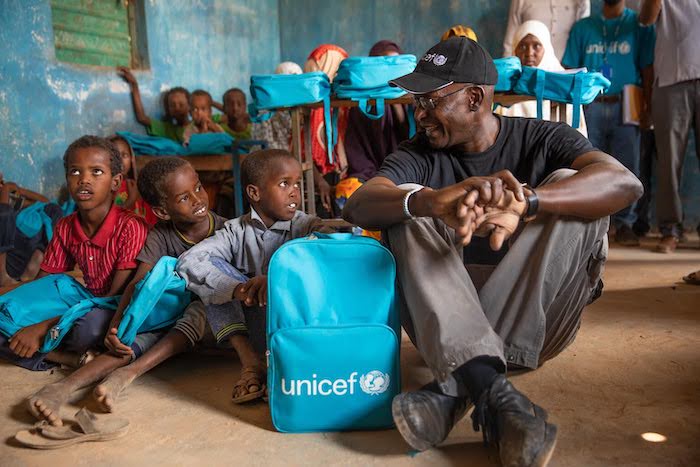 Mohamed Fall, UNICEF's Regional Director for Eastern and Southern Africa, meets with children during a visit to a UNICEF-supported school in Bra'adley, Shabelle zone, Somali region, Ethiopia. The school's students are children from the local community and those who are staying at the nearby camp for families displaced by drought. © UNICEF/UN0625007/Sewunet

Here’s a look at a few specific programs and initiatives in four countries where UNICEF works in the Eastern and Southern Africa region.

In Somalia, some mothers are forced to walk as far as 75 miles to seek emergency treatment for their severely malnourished children.

"Children have diarrhea, they are vomiting, very weak, very dizzy," Rania Dagash, UNICEF Deputy Regional Director for the region said. "The drought is the reason why they have moved [so far] away. Many more are left behind."

UNICEF-supported health centers in Somalia provide children with RUTF and therapeutic milk. This year, UNICEF is scaling up its support for those facilities while also ramping up water, sanitation and hygiene (WASH) interventions in drought-affected areas.

In South Sudan, UNICEF is focused on treating children with severe acute malnutrition. In April 2022 alone, nearly 100,000 children were admitted for treatment in UNICEF-supported facilities and were given RUTF as part of the treatment. Of the children admitted, 96 percent were successfully cured.

Improving access to quality education is another top priority. As part of that effort, earlier this year, UNICEF and partners launched a campaign to support teachers, providing training to help them better support their students.

For girls especially, being in school is about more than acquiring academic knowledge and skills; it is also about ensuring they are informed of their rights and protected from early marriage and other forms of exploitation and abuse. Teachers can play a pivotal role by providing advice and mentorship. Female teachers, particularly in rural areas, can serve as role models for girls who are at risk of dropping out. 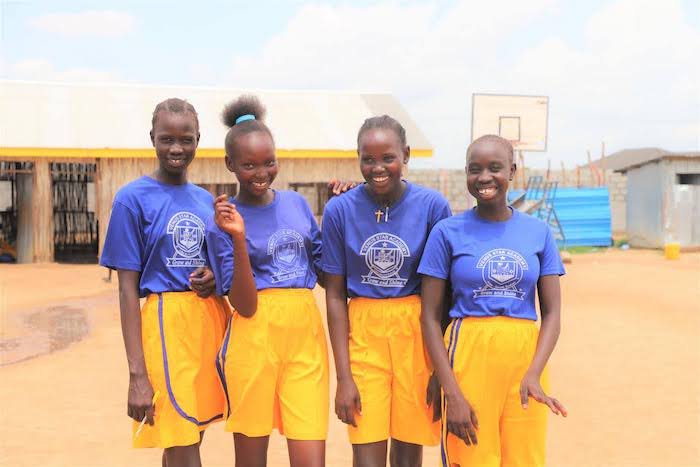 Primary 8 students were happy to reunite as their school reopened for the new academic year in South Sudan with support from UNICEF. © UNICEF South Sudan/Avelino

“Coming to school is not just about learning, it’s also a place for me to connect with my friends and we can share and discuss things that concern us girls,” says Nyandieng, a Primary 8 student, pictured with classmates above, second from the right.

In Ethiopia, UNICEF is focused on reaching and treating malnourished children while also working with partners to rehabilitate damaged or looted health and water facilities and schools and to support those displaced by drought and related crises. 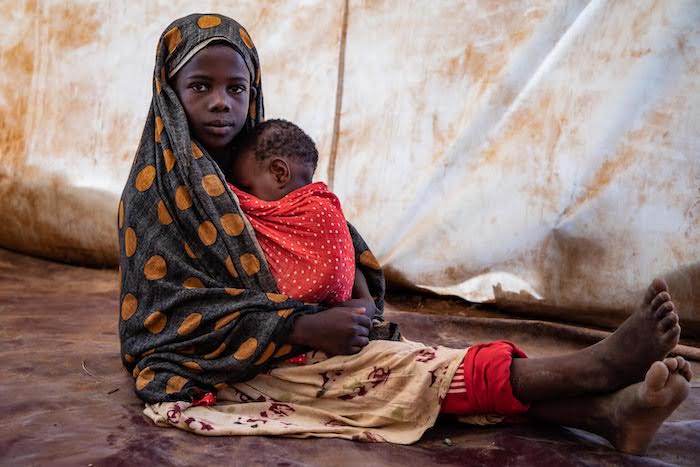 In Ethiopia's Somali region, UNICEF has set up a Child-Friendly Space to welcome children affected by severe drought and provide them with a safe space for recreational activities and learning. © UNICEF/UN0635776/Pouget

Many girls must walk for hours each day to retrieve their family's daily water supply. The organization is increasing water accessibility by providing water trucks and rehabilitating broken water infrastructure.

Yer, 11, describes the benefits of having daily access to safe water thanks to a new system installed by UNICEF and partners at the camp for internally displaced families in Ethiopia's SNNP (Southern Nations, Nationalities and People's) region, where she lives. "Before, we drank the lake water, and we often had diarrhea and stomach cramps," Yer says. "Now we are not sick anymore."

Mobile health and nutrition teams have been able to provide health services to increase the number of people who receive care. Other program goals include distributing cash assistance for families severely impacted by the drought.

UNICEF also continues to work with partners to meet the humanitarian needs of children and women impacted by the ongoing conflict in Ethiopia's northern Tigray region. This includes providing mental health and psychosocial support for those who have experienced trauma, distributing medicine and helping to set up temporary learning spaces for students displaced by the fighting. Providing emergency cash transfers to families affected by severe drought in Madagascar has been found to be one of the most effective ways UNICEF can assist those in need. There are 9,000 families in UNICEF's program, including 22,500 children.

Families typically use the cash assistance to cover the cost of food, health care and other basics. 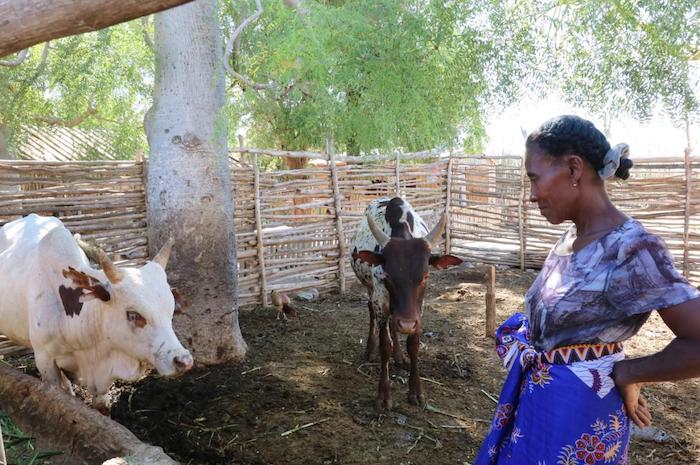 In the southern Madagascar town of Amboasary, Gertrude Tsangambelo has been receiving a monthly payment of 100,000 Ar — around $25 — since December 2020. With her first payment, Tsangambelo decided to start raising livestock. She now has an ox, a dozen goats and a dozen chickens.

"In times of great need, such as illness, we sell one of our goats to buy medicine,” Tsangambelo says. “Our children have returned to school with enough school supplies.”

An association of mothers has been formed with UNICEF’s help to offer support to program recipients and guidance on managing family finances, among other topics. Pupils of a public elementary school in Mananjary are happy to receive aid from UNICEF, having recently lost everything after the passage of cyclones Batsiraï and Emnati in early 2022. © UNICEF/UN0605783/Raharinaivo

Learn more about UNICEF's work and support UNICEF's mission to save and protect vulnerable children and families across the region. Donate today.

Top photo: Yer, 11, accesses safe water from the new system installed by UNICEF and partners at the Sirmeret camp for internally displaced families in the SNNP region of Ethiopia. © UNICEF/UN0647004/Pouget