UNICEF: Children Are Bearing Brunt of Intensifying Crisis in Ukraine

As tensions rise in eastern Ukraine, UNICEF ramps up efforts to deliver aid to hundreds of thousands of children and families whose lives and futures hang in the balance. How UNICEF is working to ease extreme hardships brought on by seven years of armed conflict and to meet urgent and escalating needs for safe water, health care, nutrition and protection.

Children and families in eastern Ukraine have long been suffering the effects of armed conflict, and political and social unrest.

In December, UNICEF reported that limited access to essential services was threatening the mental and physical well-being of Ukraine's children; that health services across the country were buckling under the strain of the COVID-19 pandemic and child poverty was increasing. Hundreds of thousands of people needed help accessing safe water to drink. With so many schools damaged or lacking resources, additional support was needed to help children continue with their education.

The situation for children has become even more precarious in the past weeks as political tensions escalate, stoking fears of a military confrontation and prompting UN officials to urge parties toward diplomacy and dialogue to achieve a peaceful resolution. 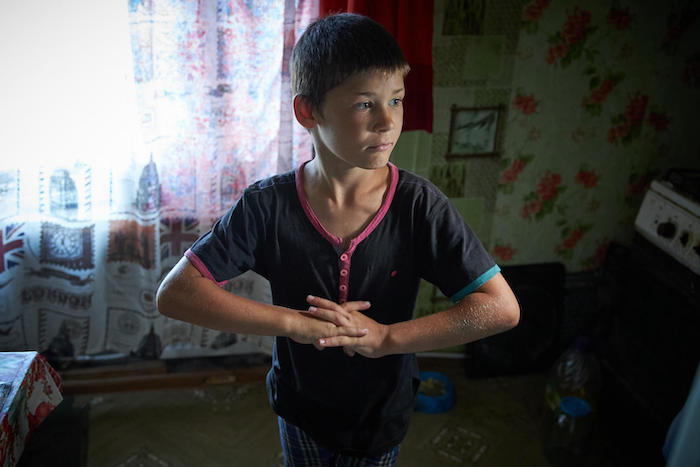 A young boy photographed at home in in Soledarska, eastern Ukraine, during a visit by a UNICEF-supported social worker. © UNICEF/UNI359067/Zmey

UNICEF's emergency response teams and partners are ramping up efforts to deliver safe water to families in communities where water systems are barely functioning. They are providing health care, nutrition and education support where services are severely lacking or have shut down entirely. And they are focusing on protecting children from violence, exploitation and abuse in the face of increased threats of gender-based violence and the risk of harm from mines and other explosive remnants of war.

Humanitarian needs are greatest for an estimated 3.4 million people, including 510,000 children, living in the Donetsk and Luhansk regions of the country, where child poverty rates top 65 percent and 57 percent respectively. 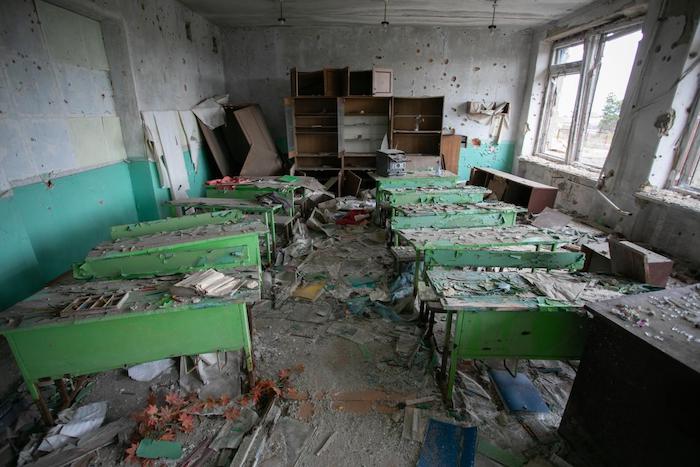 A damaged classroom in eastern Ukraine. "The ashes were the only thing 2014 brought to our streets," recalls Natasha, 16, whose frontline village of Shyrokyne was hit by massive shelling, prompting all civilians to evacuate. Since the beginning of the conflict, over 750 educational institutions on both sides of the contact line have been damaged by hostilities and many more have suffered disruptions to children's education. "The war came to us, and happiness is no more than a ghost from my dreams." © UNICEF/UN0584686/Filippov

A health system severely weakened by seven years of conflict

Ukraine's health system, including emergency medical services — which were already weak — has been severely challenged by the dual crises of conflict and the COVID-19 pandemic. Despite efforts by the government and other partners, awareness among medical professionals remains low. Due to pervasive vaccine hesitancy, Ukraine has one of the lowest COVID-19 vaccination rates in Eastern Europe — despite a surplus of vaccine supplies. And while routine immunization rates among children have improved in recent years, coverage is poor, heightening risks of another measles outbreak.

UNICEF teams are working to fill these gaps and deliver emergency support to the most vulnerable, working through four field offices – two of them in the government-controlled areas and two in non-government-controlled areas, which are separated by a 'contact line'. In 2021, UNICEF programs reached 800,000 people, including 128,000 children directly impacted by the crises.

The priority is to accelerate this impact in communities where needs are greatest, on both sides of the contact line. 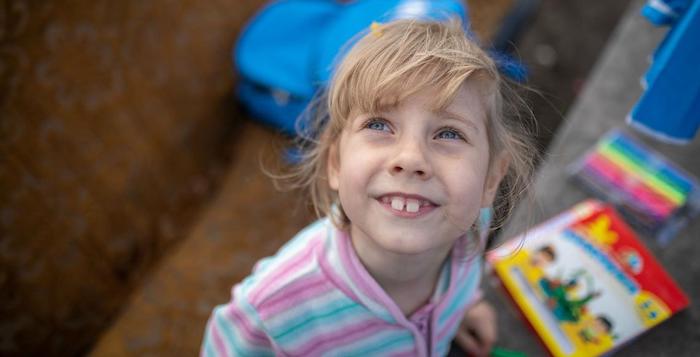 Seven-year-old Vika received a UNICEF backpack full of learning supplies when she started school for the first time in 2021. Vika lives in Avdiivka, near the ‘contact line’ that separates government-controlled and non-government-controlled areas of eastern Ukraine, areas where the impacts of seven years of conflict are most acute. UNICEF's emergency response in the region includes shoring up access to education in communities where infrastructure is damaged or rundown and teaching capacities are weak. © UNICEF/2021/Filippov

Learn more about how UNICEF is meeting vulnerable children's needs in other countries across Europe and Central Asia.

Top photo: Polina, 7, of eastern Ukraine bears the scars of injuries she suffered when a shell exploded outside her family's home when she was a year old. Her grandmother was killed in the blast, and her parents were seriously wounded by shrapnel. The family continues to struggle financially and finds it difficult to access medical services. UNICEF and partners are providing assistance to the family through a program set up specifically to support survivors of mines and explosive remnants of war. © UNICEF