From sites strategically located near the border along popular transit routes, UNICEF delivers emergency services to refugee children and mothers arriving in Romania and other host countries — paying particular attention to children who arrive unaccompanied.

In the past 10 days, 1.7 million people have fled Ukraine as fighting intensified in and round the country's major urban centers, putting millions of children and other civilians at grave risk.

While renewing calls for immediate suspension of hostilities to allow humanitarian access to those in need, UNICEF is also ramping up support services for refugees at 'Blue Dot' centers in neighboring countries. Karina and her 3-year-old daughter, Luna, speak with UNICEF Executive Director Catherine Russell at a UNICEF 'Blue Dot' center in Sighetu Marmatiei, Romania, where UNICEF and partners are providing critical services to children and families on the move. © UNICEF/UN0599679/Câtu

The centers are being set up one by one at strategic points along transit routes in close collaboration with UNHCR and local government and civil society partners.

Designed to be one-stop shops for families on the move, the hubs provide sustenance, respite, information, guidance and psychosocial support, among other services.

. @tobyfricker part of UNICEF emergency response team at Sighet where the first Blue Dot zone is up and running. #Ukraine pic.twitter.com/ex12zMEF15

Many children are arriving in border countries on their own, putting them at heightened risk of violence, abuse and exploitation.

UNICEF is calling on all neighboring countries to assist efforts to identify and register every unaccompanied or separated child and to help facilitate family tracing and reunification.

"Unaccompanied and separated children are particularly vulnerable, and their immediate needs and safety where they are must be prioritized," Russell and Grandi said.

"Every effort should be made to reunify children with their families when possible, if such reunification is in their best interest." 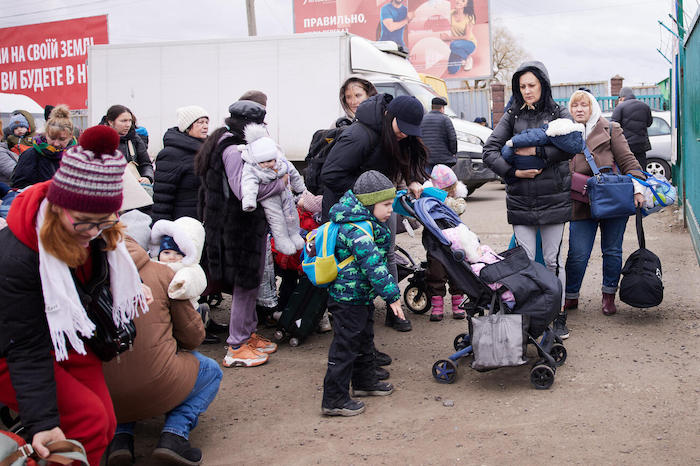 Families make their way to Ukraine's western border to cross into Poland on March 5, 2022. © UNICEF/UN0602162/Moskaliuk

Most refugees are mothers traveling with their children. Some are met by friends or relatives who provide them with transportation to points further west. Others must find their own means of transportation and accommodation.

The Blue Dots offer a safe place to rest, along with:

Each child receives a health checkup as they arrive, explains Voica Tomus, Child Protection Specialist at UNICEF Romania. Those who require medical care including vaccinations are referred to local health facilities.

Each child is also registered by a child protection officer to safeguard against harm, trafficking or abuse, and a best interest assessment is conducted if the child arrives without a caregiver. To help coordinate next steps, the Blue Dots share a single database that is also accessible to partner organizations and to national authorities. 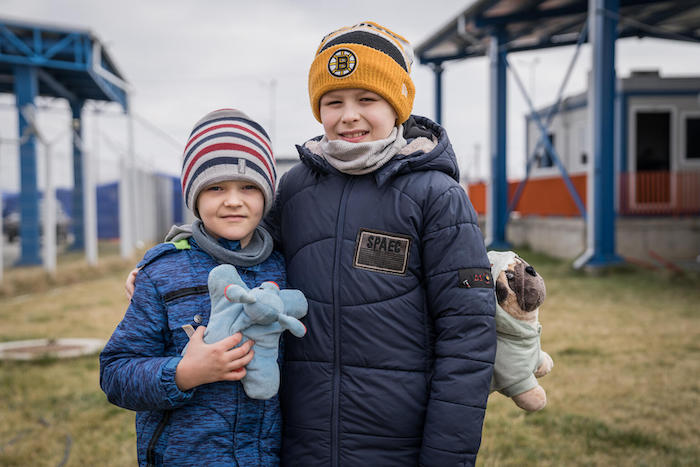 Brothers Mihail, 7, left, and Ivan, 10, left their home in Izmail, in Odessa, southwestern Ukraine, with their mother, crossing the Danube by ferry. They plan to go to Galati, Romania, where they have no family or friends but where relatives told them they would be safe. © UNICEF/UN0601659/Moldovan

Some families stay at a Blue Dot only briefly while they await transport to their next destination, Tomus says. Those who stay longer can rest inside tents that are heated.

UNICEF is in the process of opening a total of 26 Blue Dots at key border locations in Belarus, Czech Republic, Hungary, Moldova, Poland, Romania and Slovakia. Each center has the capacity to support 3,000 to 5,000 people per day.

In Poland, UNICEF has deployed child protection, emergency and water and sanitation experts to help establish eight Blue Dot hubs along border areas, in collaboration with UNHCR. In Moldova, UNICEF is working with its five largest child protection partners to set up at least seven Blue Dots along the border with Ukraine.

Here’s what a response for refugees fleeing #Ukraine looks like from the inside. This is a--Blue Dot, a temporary center where children and women can seek #protection, support, food, and other emergency supply. @UNICEFRomania @UNICEF_UA pic.twitter.com/2hy9xZj9hO

"We try to ... make sure that children who are coming across are safe, which is not always an easy thing to determine, but we're working hard to do that," Russell said on March 5 during a visit to the Blue Dot center in Sighetu Marmatiei, the first to open. "It's a good place ... because people are happy to be leaving Ukraine, but it's also a sad place to be sure, because there is so much uncertainty and people are exhausted crossing the border. 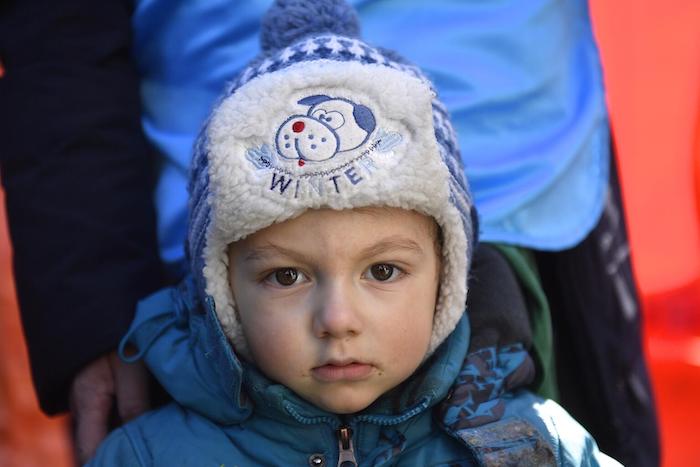 Two-year-old Matvee traveled by train with his mother, Hanna, for two days without food or water before reaching Romania. Hanna had been a volunteer with an NGO based in Kharkiv, helping people fleeing eastern Ukraine. "The attacks came too close — just two houses away there was a bomb," Hanna said. "It was time to go." © UNICEF/UN0599975/Nicodim

UNICEF is coordinating with other UN agencies — the refugee agency UNHCR, International Organization for Migration, World Health Organization — and with national governments in Romania, Poland and other host countries to protect the most vulnerable families on the move.

Support UNICEF's emergency response in and outside Ukraine. Your contribution can make a difference. Donate today.

Top photo: Alisa, 8, who fled Ukraine with her mother, Vlada, photographed at a transit stop in Romania on March 4, 2022. Vlada says she hopes they can return to their home in Odessa in a month. In the meantime, mother and daughter will make their way to Bucharest, where Vlada plans to continue working as a translator. © UNICEF/UN0601695/Moldovan