For every child, hope.

Seventy years ago, UNICEF was founded to bring lifesaving aid, long-term support, and hope to children whose lives and futures are put at risk by conflict, by crises, by crushing poverty, and, increasingly, by the effects of climate change. UNICEF’s work for the most disadvantaged, excluded, and vulnerable children has never been more relevant, nor more urgent.

Left  Circa 1950, in the north-western town of Castoria, Greece, a boy holds a blanket, clutching the skirt of a woman. Right  In 2015 in the Former Yugoslav Republic of Macedonia, refugees stand on the train platform outside a transit center, on their way to western Europe.

Left  In 1960 in Mexico, three-year-old Concepcion Uribe wears leg braces to support her polio-weakened limbs outside a rural health center. Right  In 1991 in Sudan, a baby receives a dose of oral polio vaccine in a children’s clinic in Khartoum. 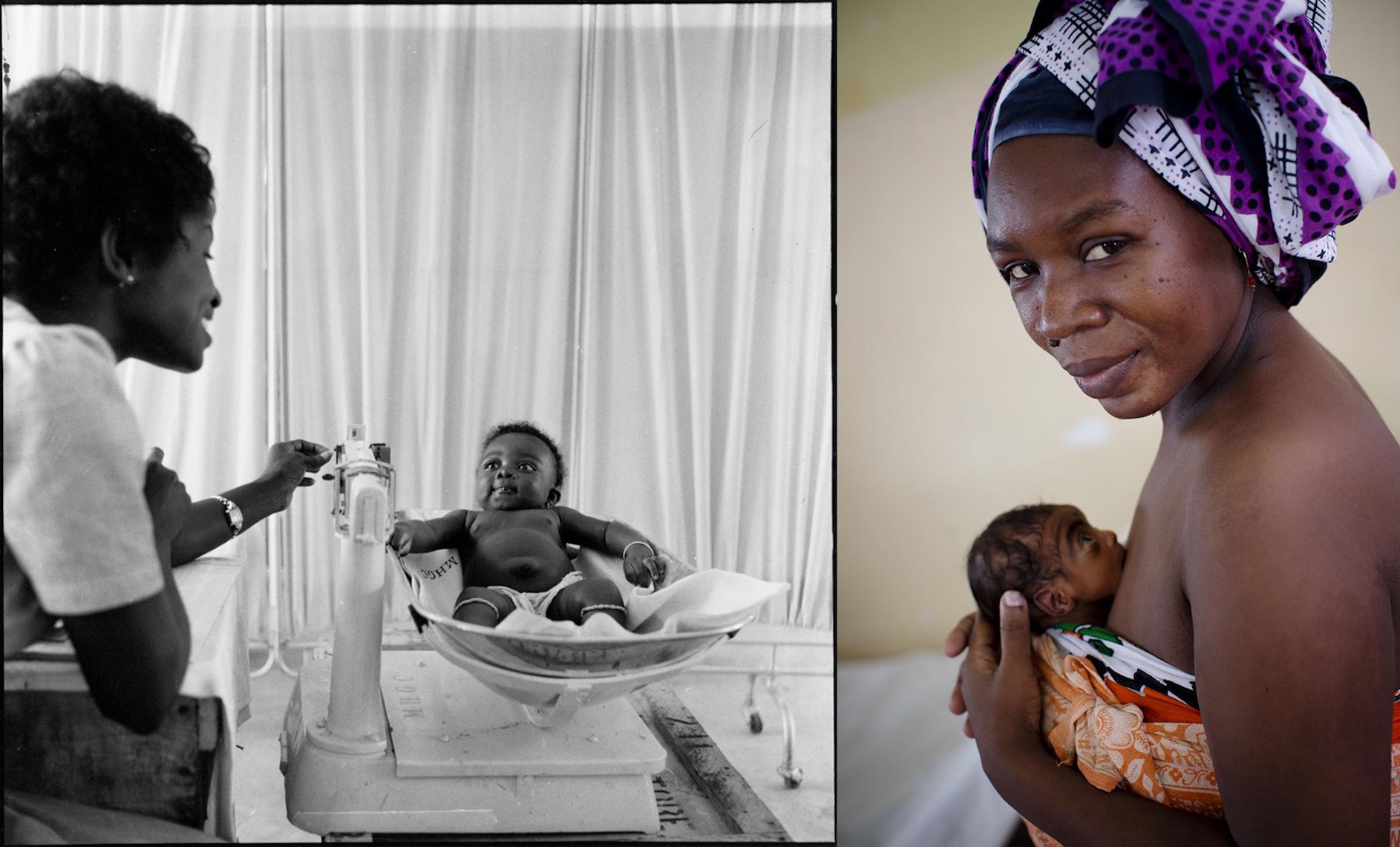 Left  In 1960 in Ghana, a midwife weighs a child on a scale in a comprehensive long term rural health plan emphasising training of medical personnel in Tuma. Right  In 2014, a woman cradles her preterm baby using ‘kangaroo care’ against her skin to keep warm, in Tanzania.

Left  In 1946 in Poland, a smiling boy carries six loaves of bread. Right  In 2009 in India, malnourished children receive a meal of rice and dal in Sullineabad Village where basic health education, nutrition services are provided at the village level for children and women in impoverished areas. 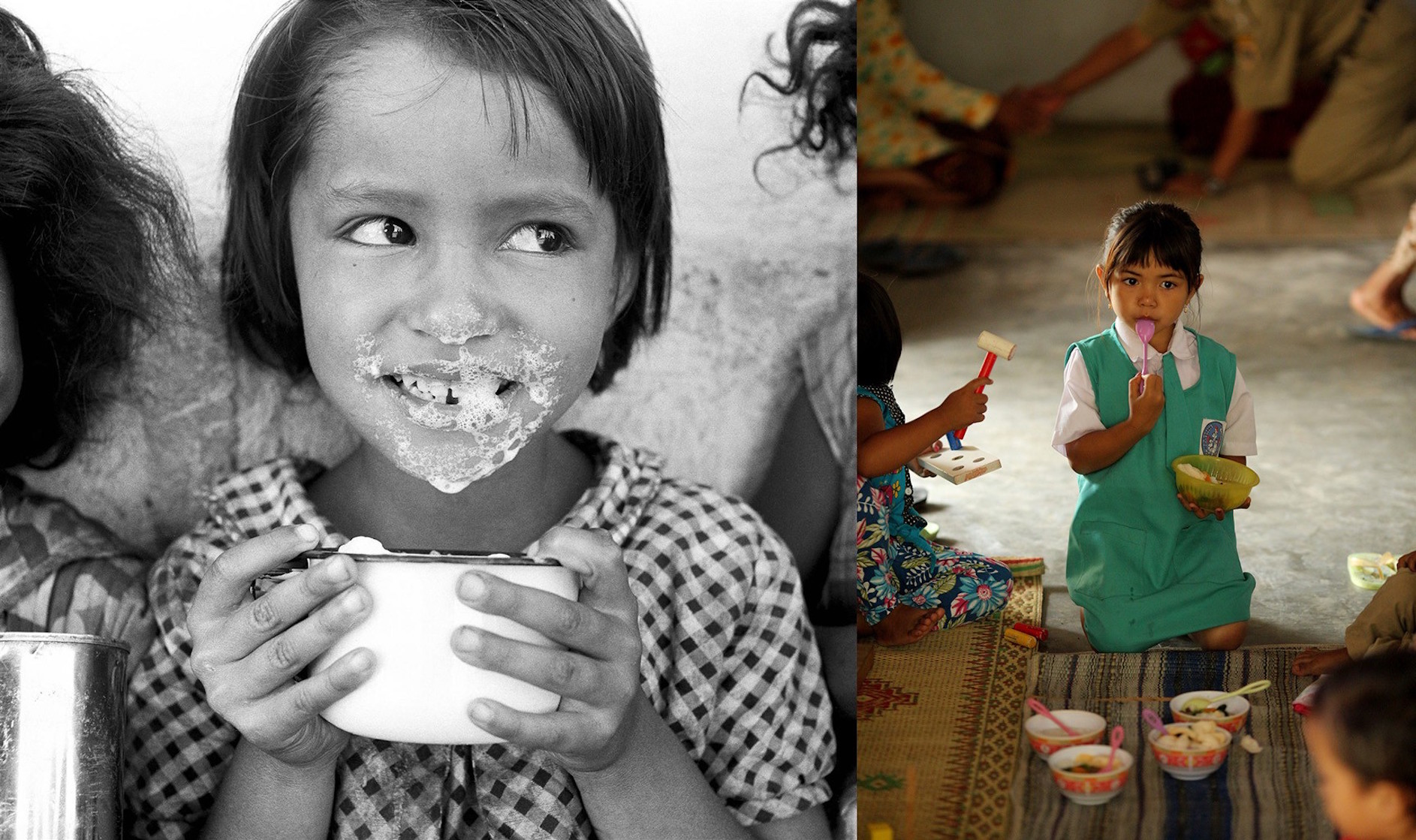 Left  Circa 1950, approximate locale Guatemala, five-year-old Norma Salandia’s mouth and nose are covered with foamy milk, after drinking from her cup. Right  In 2015, a girl eats food prepared by ‘cadres’ who play an important role in Indonesia’s health system.

Left  In 1946 in Germany, children — most of who lost parents in concentration camps — perform a folk dance at an army telecommunications camp. Right  In 2006, children play during recess at a school in one of the poorest districts in Zambezia Province in Mozambique.

Left  In 2000 in Afghanistan, boys collect water at a handpump on the outskirts of the town of Laghman. Right In 2012, a School Brigade member demonstrates proper hand washing techniques during assembly in Bangladesh.

Left  In 1947 in Egypt, boys are cheered on during the long-jump event of a sports competition at a refugee camp. Eighteen months before, these children were at war. Right  In 2012, boys displaced by inter-ethnic violence play volleyball, outside a child-friendly space, in South Sudan.

Left  In 1972 in South Viet-Nam, two boys who are blind read Braille. Despite the difficulty of the war, special schools have been set up. Right  In 2014, Usher, 7, who has a physical disability, a first grade student in Guinea Bissau, learns as an equal alongside his peers.

Left  Circa 1946 in Egypt, children look at the Serbo-Croatian words ‘nasa skola’ (our school) written in the sand in a refugee camp. Right  In 2014 in Italy, adolescents spell the word ‘costruire’ (to build), chosen to reflect the need to build a new generation with better values.