Hundreds of thousands of people who remain inside Ethiopia's embattled Tigray region are living in famine conditions, according to new data from the UN.

Violent conflict erupted in Tigray in November 2020, displacing millions of Ethiopians and sending hundreds of thousands of refugees across the border into eastern Sudan. UNICEF has been working with partners since fighting began to address the humanitarian crisis, which has only deepened in the months since.

"Alarming new data has today confirmed the magnitude of the hunger emergency gripping Tigray," David Beasley, Executive Director of the UN's World Food Program, said in a statement upon release of the data.

An estimated 5.5 million in Tigray and neighboring zones Afar and Amhara are food insecure to some degree and in need of food aid, according to the UN's latest analysis. Of those, at least 4 million people face severe hunger, and 350,000 — 40 percent of them children — are in what the UN classifies as a phase 5 catastrophe, the highest level, which triggered the famine alert. 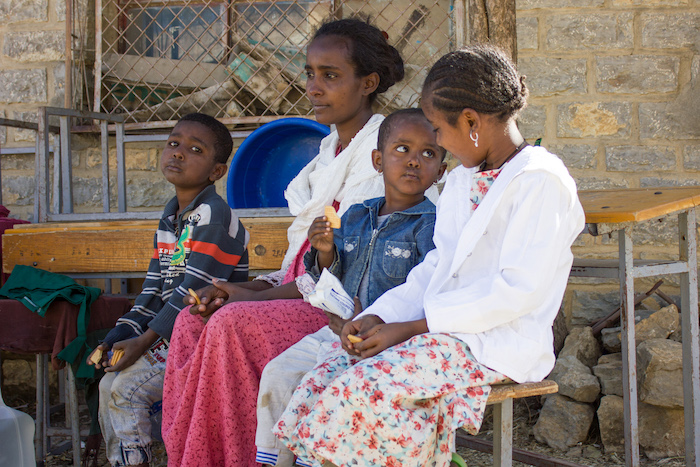 Tsega-brhan Mebrahtu, 27, and her three children — Milen, 3, holding up a high-energy biscuit; Abel, 6, far left, and Arsema, 10, far right — were displaced from Tigray's western zone and are staying in the town of Mekelle, where they are able to receive assistance from UNICEF, including nutrition support. The food crisis in Tigray brought on by the ongoing conflict there has escalated to famine conditions for 350,000 people who remain inside the embattled region, prompting UNICEF and partners to call for a ceasefire and for improved humanitarian access to families who are most at risk. © UNICEF/UN0409569/Leul Kinfu

The report, released by IPC — short for Integrated Food Security Phase Classification, a UN-backed initiative to gather evidence to determine the scope and severity of food crises around the world — attributes the crisis to the cascading effects of conflict, including population displacements, movement restrictions, limited humanitarian access, loss of harvest and livelihood assets and dysfunctional or nonexistent markets.

"If the conflict further escalates or, for any other reason, humanitarian assistance is hampered, most areas of Tigray will be at risk of famine," the report reads.

Famine is declared when at least 20 percent of the population is affected by extreme food shortages; acute malnutrition is affecting at least one-third of all children; and 2 in 10,000 people are dying every day from starvation or a combination of malnutrition and disease.

While the situation in Tigray has yet to cross those thresholds, it is being described as the worst food crisis since famine was declared in Somalia in 2011 — and UNICEF and partners are bracing for the situation to get worse before it gets better.

"We are seeing more young children and babies slide dangerously close to sickness and potential death from malnutrition," said UNICEF spokesman James Elder, speaking at a press briefing on June 11. "UNICEF is working with our partners to provide nutrition, health care and clean water support. However, without humanitarian access to scale up our response, an estimated 33,000 severely malnourished children in currently inaccessible areas in Tigray are at high risk of death. The world cannot permit that to happen.

"While this figure of 353,000 does not meet the threshold needed to trigger a formal famine declaration... let’s not play with terminology when people are dying."

Beasley said that the WFP, a key UNICEF partner in ongoing emergency response efforts, has been able to reach 1.4 million people with food relief, "yet that is barely half of the number we should be reaching."

UNICEF, together with WFP and the UN's Food and Agriculture Organization, has called for urgent action to address the dramatic acute food insecurity in northern Ethiopia and especially the Tigray region "where the risk of famine is imminent, unless food, livelihood assistance and other lifesaving interventions continue to be scaled-up, unimpeded access is guaranteed and hostilities cease." 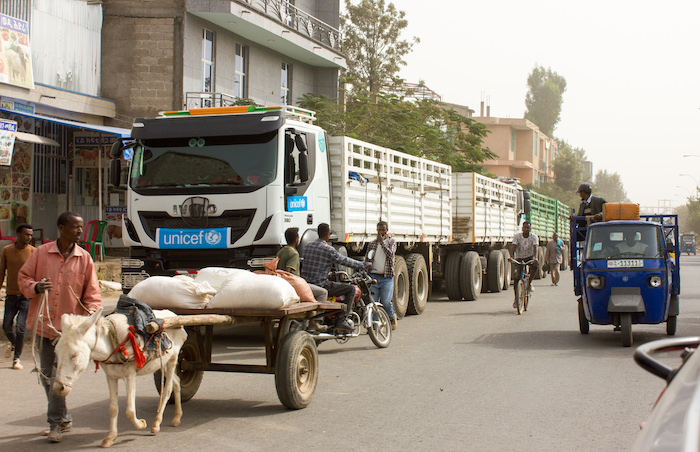 Since February, 250,000 children under age 5 have been screened and over 7,000 of them have been admitted for treatment. UNICEF projects that 56,000 children will need treatment — 33,000 of whom will be missed "if unfettered access is not guaranteed," Elder said.

UNICEF estimates it will need more than $10 million to meet the needs for therapeutic food in Tigray, Amhara and Afar. UNICEF also needs additional funding to provide medicine and other health services to children and families where access to routine care has sharply declined and other support to mothers and caregivers of infants and young children.

Top photo: Yeshialem Gebreegziabher, 27, holds her 6-month-old daughter, Kalkidan Yeman, who is suffering from malnutrition, at Aby Adi Health Center in the Tigray region of northern Ethiopia, on June 7, 2021. New UN data released on June 10 shows that 350,000 people in the region are living in famine conditions and that the humanitarian crisis brought on by violent conflict is likely to get worse before it gets better. © UNICEF/UN0475527