Ukrainian Youth Delegates Call to Action for Youth Around the World

Ukrainian Youth Delegates speak out on how the war has impacted their lives, why they continue to volunteer, and what youth across the globe can do to help.

Before February 24th, 2022, Alina Kurska, 26, from Kyiv and Denys Ganzha, 23, from Kharkiv, spent their days busy studying, working, and looking forward to their weekend plans with their friends. Since then, however, their everyday lives have been defined by hearing alarms, packing up essentials, sleeping in bomb shelters, trying to get a hold of family and friends, leaving their homes and country, and coordinating humanitarian support for their neighbors and fellow citizens. Their very livelihood has come under attack.

War is nothing but fear, pain and death. If you think that a war is not your concern, you are wrong. Your actions define how we and the succeeding generation will live. - Alina Kurska

The situation in Ukraine is dire, especially for children and young people, as the sudden and dramatic escalation of war has resulted in millions of children and their families being internally displaced. Among the nearly 3.5 million people who have fled to safety in neighboring countries, over 1.5 million are children. Since the start of the war, a child in Ukraine has become a refugee almost every second. While Denys is firm about staying because, as he says, he is “needed here“ and wants to “continue fighting on the informational, digital and humanitarian front,” Alina has recently sought refuge in Poland. Here she is volunteering with the Jolanta Kwaśniewska Foundation, helping other Ukrainian refugees temporarily staying in sports stadiums, railway stations and schools relocate to different cities within the EU. 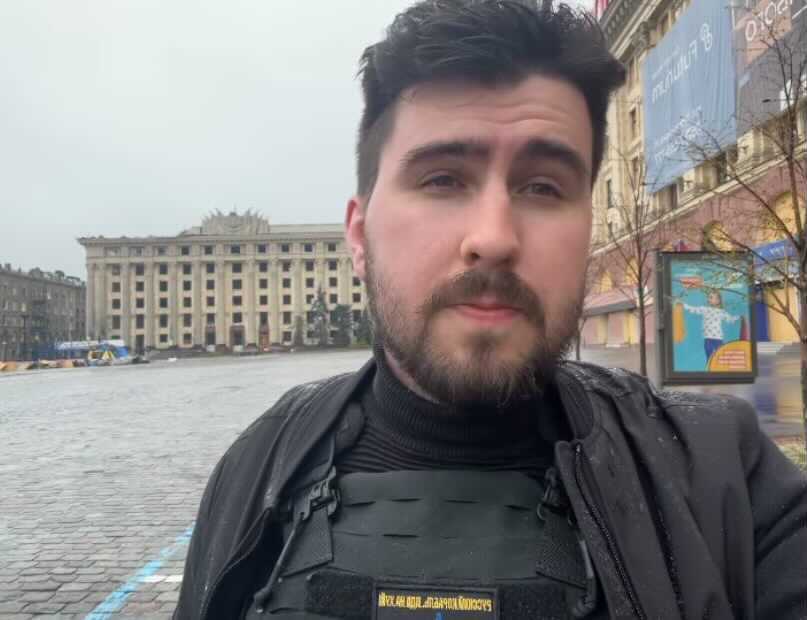 Since the start of the war, Alina has been talking to numerous media outlets to tell the world what's happening in Ukraine and often "gets asked whether or not she is scared." To which she replies: "of course, it is not easy to hear explosions and alarms not far from home. The first two nights after the war started, I did not sleep—part of my nights in the shelter. Every day now, I experience nerves, tension and fatigue. When I was still in Ukraine, I would always stay and fall asleep in warm clothes: jeans and a sweater. There was a bag with essentials and documents near the door in case of an alarm. This certainly has been scary, but that's not what I want to tell the world."

I don't know if I have a flat anymore, I'm under so much stress I've already lost 5 kilogramms, but that's nothing compared to having lost my friend. - Denys Ganzha

Instead, the message she wants to send is that all that has happened, the "victims, ruined cities and ruined lives this war has already cost so far - all these devastating consequences cannot be reversed." But further losses can be prevented and people in need can receive help." Denys wants young people to know that "as youth, we are not the future, we are the current." And that there are many actions young people can take to help those in need in Ukraine, whether it's raising funds or raising awareness. "If you have a spare minute or a spare hour, you can do something. Everyone is needed. You can do videos; you can do nice marketing things; donating money helps." 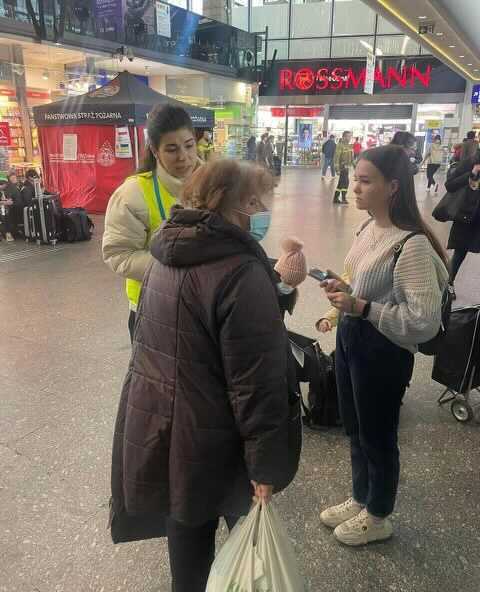 Youth Delegate to the UN Alina Kurska speaks to Ukrainian refugees at a train station in Warsaw, Poland, on March 22, 2022 © photo courtesy of Alina Kurska

That is why both Alina and Denys are continuing their work as United Nations Youth Delegates, representing the young people of Ukraine at the UN and providing input to the Ukrainian Delegation on issues related to youth and participation. Along with the media, digital and humanitarian work, Denys's Youth Delegate role keeps him busy round the clock, leaving little time for sleep. Still, he sees it as his "duty to continue working." He even left his hometown of Kharkiv on the second day of the war to "move closer to Kyiv" to be closer to "his government and be able to help, contribute, and serve. To be able to do something." Currently, on the outskirts of Kyiv, he says he is "staying safe and alive thanks to the Ukrainian army. The work he is doing gives him purpose throughout the most difficult times. "I don't know if I have a flat anymore, I'm under so much stress I've already lost 5kg, but that's nothing compared to already having lost my friend."

I would say to the youth out there that young people from all corners of the world need to act, get involved and do everything possible to resolve existing conflicts and bring peace. - Alina Kurska

Still, despite their current reality, both Alina and Denys continue to have hope. As Denys notes, “The future will be bright for my country because it will be free and united more than ever. This is what makes me not stop. A few weeks ago, we reached the point when we will never return to our normal lives. Ukrainian people have already shown so much courage. Sometimes I think that not any country in the world has the same courage as us.” Similarly, Alina finds hope in the “courage and heroism of Ukrainians.” Now, more than ever, she sees "the unity of the Ukrainian people, the strength and unshakable spirit of the Ukrainian army," which inspires her.

Alina has learned never to take freedom for granted ever again. “Just a few weeks ago, I was living a normal life. I was working towards my plans for the future. And if someone told me that it could be taken away overnight and just in a moment you could lose everything while someone is trying to capture, steal and destroy your homeland, I would certainly not believe it. I would say to the youth out there that young people from all corners of the world need to act, get involved, and do everything possible to resolve existing conflicts and bring peace. War is nothing but fear, pain and death. If you think that a war is not your concern, you are wrong. Your actions define how we and the succeeding generation will live.”

Want to take action to support UNICEF's response to the war in Ukraine?

The best way to support UNICEF's efforts is by donating or fundraising. Your financial support aids UNICEF's evolving response to the war in Ukraine. Examples of the response are detailed below:

Host a fundraiser: Take a look at our Fundraising during Emergencies one-pager for guidance. Once you're ready, register your fundraiser through our Fundraiser & Event form for additional resources.

While UNICEF USA is accepting donations, we are not collecting supplies and other non-cash goods. Providing monetary donations is the best and fastest way to help UNICEF provide assistance to children in Ukraine. Unfortunately, gifts or items have to be screened, sorted, stored, transported and delivered, making it inefficient for us to collect these items in terms of time and money. For this reason, we are accepting monetary donations to help with the evolving response to the military operation in Ukraine.

Raise awareness: Educate yourself and your community on the evolving conflict. Keep up to date on UNICEF's latest response, statements and news by bookmarking our website, www.unicefusa.org/war-ukraine, and checking out the resources below:

UNICEF USA Website - War in Ukraine - Stay up to date on the latest news.

Top photo: A transparent wall covered with children's drawings, inside of a Tesco store now operating as a temporary refugee center near the border with Ukraine, on April 1st, 2022 © photo courtesy of Michal Korta