Torn Apart by Hurricane Irma, a Family Is Still Picking Up the Pieces

Stronger storms linked to climate change are forcing more and more families out of their homes in the Caribbean. UNICEF is there to help traumatized children recover.

Corine and James Gerald, Sr. have been married for nine years, but they have been living apart since Hurricane Irma's 185-mph winds barreled into Barbuda in September 2017, forcing all 1,800 of the island's residents to evacuate to Antigua.

Irma has tested their relationship, their kids' resiliency and their finances. Still, both Corine and James Sr. agree the sacrifices they've made and continue to make are worth it for their children, 13-year-old James Jr. and 11-year-old Jerrene.

All Barbuda's 1,800 residents were evacuated during Hurricane Irma. Some have yet to return.

Corine is still as in love with James Sr. as when they first met. As she puts it, "We had a good relationship. We are the best of friends. If I had to marry again, I would marry the same person. I wouldn't change a thing."

But when she looks back on the past two years, Corine wishes she could change how hard it's been for her family. In the weeks after the storm, she and James Sr. agreed to split up temporarily. She remained in Antigua so the children could continue school, while James Sr., a carpenter, returned to Barbuda to help build back the island they all call home. Two years later, the family is still torn in two. Corine Gerald and her children Jerrene, 11, and James Jr., 13, at their temporary home on Antigua. They were evacuated from Barbuda by Hurricane Irma in 2017. © UNICEF/UN0345649/LeMoyne

At first, Corine and the children stayed with friends in Antigua. From there, facing competition from all the other evacuated Barbudans who were looking for housing on Antigua, along with Dominicans who had more recently arrived after Hurricane Maria, they moved into an abandoned house with no running water or electricity — quite a change from the two-story, four-bedroom home with a big, lush garden the tight-knit family of four shared back in Barbuda.

After Hurricane Irma, the family moved into an abandoned house with no running water or electricity

"We had to live in the dark. We had to carry water in bottles," Corine recalls. "When [the children] went to school, they had to hide from their friends because they didn't want anybody to know where they were living." 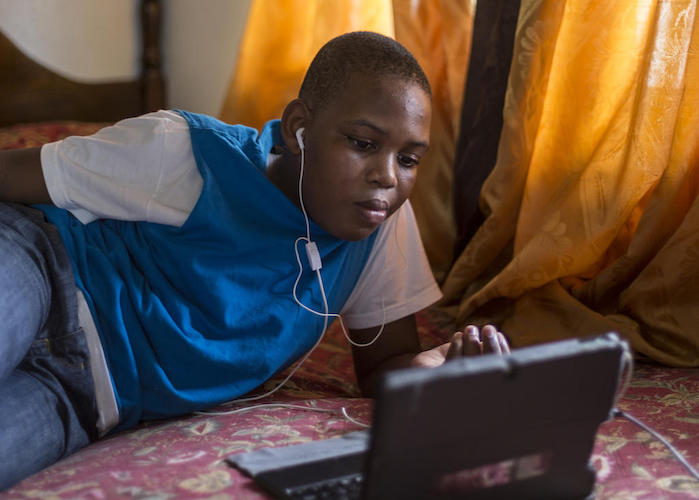 James Jr., 13, was traumatized after Hurricane Irma forced his family to evacuate their home in Barbuda. Bullied at school in Antigua, he has struggled to regain a sense of normalcy. He misses his dad, who returned to Barbuda to earn an income as a carpenter and rebuild the family home. © UNICEF/UNI227648/LeMoyne

According to James Sr., it was especially tough for his son. "He was bullied at school. He was really traumatized from the storm."

We didn't get enough support. Maybe people didn't really understand what we went through.

Corine agrees. "We didn't get enough support. Maybe people don't really understand what we went through. James Jr. was acting like we were going through the hurricane all over again. He wasn't himself. He wasn't studying or doing anything in school. When the time came for him to take exams, the principal called and said he wasn't ready. I had to take him to the doctor. I had to work with him and try to comfort him as much as I could." 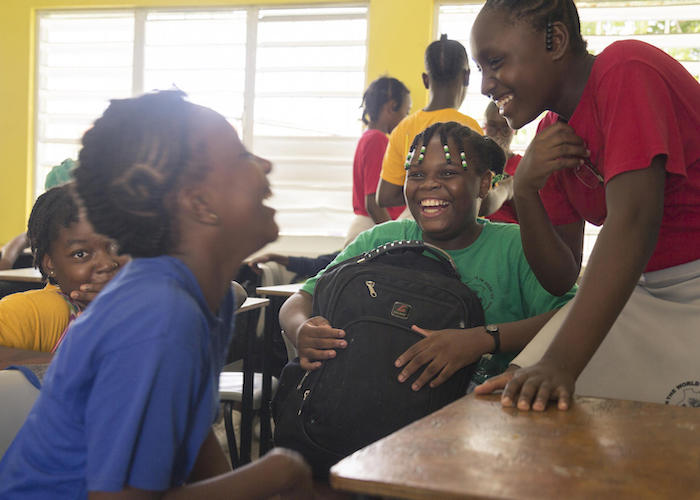 Eleven-year-old Jerrene (center) shares a laugh with fellow students at Princess Margaret Secondary School in St. John's, Antigua. Jerrene and her brother and mother remained in Antigua after their evacuation from Barbuda because there were better education opportunities there. © UNICEF/UNI227653/LeMoyne

To help them recover from the trauma they experienced, James Jr. and Jerrene participated in UNICEF's "Return to Happiness" counseling program, which encourages children to share their feelings through conversation, art, play and sports. After Hurricane Irma, UNICEF provided psychosocial support in Antigua shelters to nearly all families evacuated from Barbuda. Once families returned to Barbuda, UNICEF also facilitated outlets for children including dance, drama, photography, filmmaking and robotics, as well as programs for teachers to help them practice mindfulness coping skills.

In Antigua and Barbuda, general mental health services are just gaining traction. The few school counselors are at capacity and were especially stretched during the months after Irma hit. UNICEF is working with the Ministry of Education to build up the country's psychosocial efforts in regular and emergency situations.

Now Corine and her children are living in a small, two-bedroom rental house in St. Johns, the capital of Antigua. James Jr. is repeating a level in school, and he's excelling. But being in the top 100 students hasn't exempted him from the trauma that can still creep in every time hurricane season rolls around. "This September, we began to worry," says Corine. "This [house] is not safe for us. And after what we've been through, we just reflect back." Homes destroyed by Hurricane Irma in 2017 stand empty on the island of Barbuda. A majority of people who evacuated following the storm have returned, but many homes remain unrepairable or unlivable. © UNICEF/UN0345629/LeMoyne

The children weren't the only ones traumatized by Irma — the whole family has suffered. "Sometimes I'm feeling down. I'm stressed out," says Corine. "I have nobody to talk to because he's over there. [The children] want to see their father. It affects us."

I miss [my children] a lot, especially at night.

James Sr. would like nothing more than to be there with his family. But with Corine out of work and focusing on their kids' progress, James Sr. has had to work — and fight to be paid — extra hard now. "I miss them a lot, especially at night," he says. "I go on YouTube or pick up the guitar and I start to sing and play. That keeps me going. The music lets me shut off everything and concentrate. On the island of Barbuda, James Gerald, Sr. stands in front of his family's home, damaged by Hurricane Irma. He looks forward to being reunited with his wife and children one day.  "I'd like to be there for them as a father, every day," he says. © UNICEF/UN0345647/LeMoyne

"I'd like to be there for them as a father, every day. When we were together as a family, I'd always make sure when I got home to ask the kids if they had any homework. We got things done together, as a team.

"It's challenging for me, because I've been here alone for over a year. I accept it for what it is. It won't be forever. It's a sacrifice I'm making. So I just say that to myself: I'm going to live with it for now."

In the past five years, the number of people displaced from their homes by storms and flooding linked to a changing climate in the Caribbean has multiplied by six. Children have contributed the least to climate change, yet they will suffer its effects the most and for the longest. They should receive the strongest protections. Read the UNICEF Child Alert report here and learn more about UNICEF USA's hurricane relief efforts and how you can help.

UNICEF works with partners to help families rebuild their lives and communities after natural disasters. Please give generously.

For more than 70 years, UNICEF has been putting children first, working to protect their rights and provide the assistance and services they need to survive and thrive. With a presence in 190 countries, UNICEF has helped save more children's lives than any other humanitarian organization in the world.

Top photo: Corine Gerald, Sr. and her children Jerrene, 11, and James Jr., 13, live in a rental house in Antigua. The family was displaced from their home in Barbuda by Hurricane Irma in 2017. © UNICEF/UNI227632/LeMoyne