“Hello everyone. You’re listening to 103 FM, LAFA Radio this afternoon,” says Christella Razanamalala, sitting in a recording booth in Taolagnaro, capital of Madagascar’s Anosy Region. She’s part of a crack reporting team that covers a wide range of issues affecting her community.

As a member of the UNICEF-supported Junior Reporters Club (JRC), Christella works with her teenage peers twice a week to cover the stories that matter to them. Kids 12 and older can participate in the program and are often recruited through messaging included in each broadcast. Among other responsibilities, Christella helps write scripts and record and edit one-hour shows that go out every Wednesday afternoon. It’s an opportunity for kids like her to bring the issues that matter to them to the forefront. A short film leads to a longer journey

This isn’t Christella’s first foray into what UNICEF calls “communications for development.” Last year, she directed a short film, ‘Wonder Woman,’ which looks at the toll that child marriage and pregnancy take on girls and their families. “I decided to make this video because, sadly, there are currently lots of underage girls here who are pregnant,” says Christella. “I insisted on playing the main role because it helps me to express what I feel deep in my heart.”

Though it’s just 64 seconds long, ‘Wonder Woman’ leaves a lasting impression — so much so that it was entered into competition through The One Minutes Jr., an international arts-based initiative supported by UNICEF. Not long after, Christella was named a finalist and invited to Amsterdam, where her film placed third overall. It was a tremendous honor for Christella, who felt it was important to show the daily realities of life in Taolagnaro to the rest of the world.

Bringing stories to life: from the group roundtable to the airwaves

Since returning, Christella has applied her creative and investigative learnings to the JRC. “A big reason I decided to join is because it allows me to continue what I’m already doing,” she says. “It’s important for children and youth that adults know what I have to say, what young people have to say.” 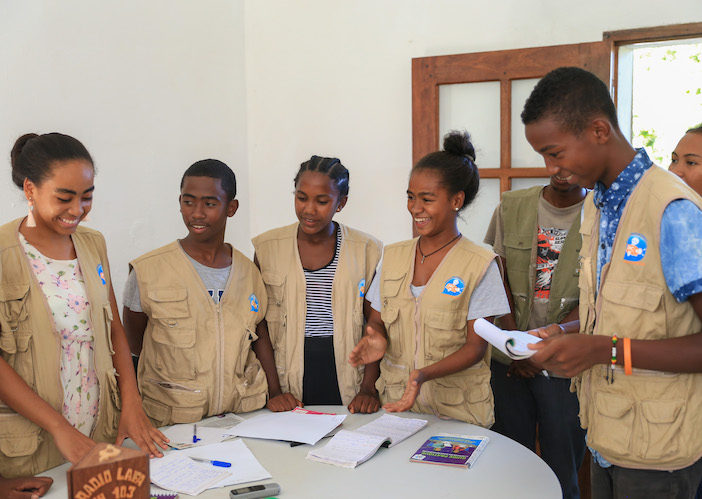 Christella (fourth from left) and her fellow Junior Reporters act out one of the week's scripts. The process is collaborative and everyone is given a chance to contribute. © UNICEF/Ralaivita

One of the Club's main vehicles for doing so is radio skits that cover a wide variety of topics, including proper nutrition, the importance of education, good hygiene practices, environmental preservation and more. Members are enrolled in life skills trainings through Let Us Learn, a UNICEF initiative supported by Zonta and other donors that empowers children — especially girls. Twice a week, the kids meet around a table at LAFA Radio Station, discussing how to bring their lessons to life as scripts acted out in the recording booth. “We can reach people through radio programs, and many people will listen and change their behavior,” says Christella.

But it’s not just the skits that go out over the airwaves. These journalists in training also venture outside of the studio, interviewing community members including local officials. The Club is self-sustaining: Several of the instructors have gone through the program themselves, and can offer insight on how to best cover the week’s events. “The strength of this program is that it gives young people a voice and the skills they need to help them achieve their ambitions. And it’s having a real impact,” says Abela Ralaivita, UNICEF Madagascar Communication Officer, also noting that some JRC alumni have gone on to pursue professional careers in the field. 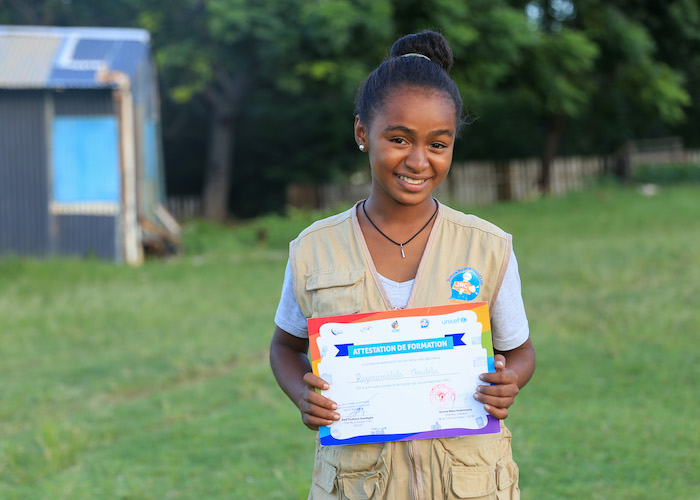 Christella proudly displays her reporter's training certificate. She's well on her way to realizing her dream of becoming a journalist. © UNICEF/Ralaivita

Christella hopes to be among them someday. "I'd like to become a journalist," she says. "They can be witnesses for what's happening in the world."

In the meantime, her peers know that they can catch her every week — same time, same station.

Watch more of her story:

Check out how you can amplify kids' voices this holiday season.