Team Vaccine: Immunizing Every Child Is a Global Group Effort

Last December, Baby Joy Nawai made history when she was vaccinated at her 1-month checkup. Though the immunizations she received were routine, the way they got to the remote island in Vanuatu, where she and her family live, was anything but. The vaccines were flown in by commercial drone.

UNICEF uses all modes of transport to send vaccines out into the field — everything from planes, boats and jeeps to bicycles, donkeys and camels. But this was the first time a commercial drone delivered the vital supplies, flying over the challenging geography that is the main reason why one in five children in Vanuatu miss out on their immunizations.

To reach Joy and the 13 other children who were vaccinated that day, the drone traveled 24 miles to Cook's Bay, where grateful registered nurse Miriam Nampil was there to meet it. “It’s extremely hard to carry ice boxes to keep the vaccines cool while walking across rivers, mountains, through the rain, across rocky ledges. I’ve relied on boats, which often get canceled due to bad weather,” says Nampil, whose monthly visits provide the only health care available to the area's children. ”But now, with these drones, we can hope to reach many more children in the remotest areas of the island.”

Transporting vaccines isn't easy. To remain effective, vaccines must be kept consistently cool — no small feat. Warm weather locations like Vanuatu, which is made up of more than 80 remote islands with limited roads, pose extreme challenges. The drone carried the vaccines in a temperature-controlled Styrofoam box and made the trip, which takes hours on foot, in just 25 minutes. Though UNICEF has used drones for medicine delivery before, this was the first time a country used a commercial contractor, signaling its commitment to immunizing all children, no matter where they live.

“Today’s small flight by drone is a big leap for global health,” Henrietta H. Fore, UNICEF Executive Director, said at the time of the groundbreaking event. “With the world still struggling to immunize the hardest-to-reach children, drone technologies can be a game changer for bridging that last mile to reach every child.”

Of course, technology is just part of the solution. Vaccines work — but only if parents are on board. The World Health Organization declared vaccine hesitancy one of the top ten threats to global health in 2019. Life-threatening diseases like measles that were nearly eradicated are once again on the rise.

To shield children from these deadly threats, UNICEF pays careful attention to every stage of a vaccine's journey. Here, meet just a few members of the global team — logistics and supply specialists, vaccinators, social mobilizers, parents and children — who must all work together to immunize every child.

Though Baby Joy's drone-delivered vaccines made news around the world, many of the four billion doses of vaccines UNICEF procures every year still travel the old fashioned way — by plane. 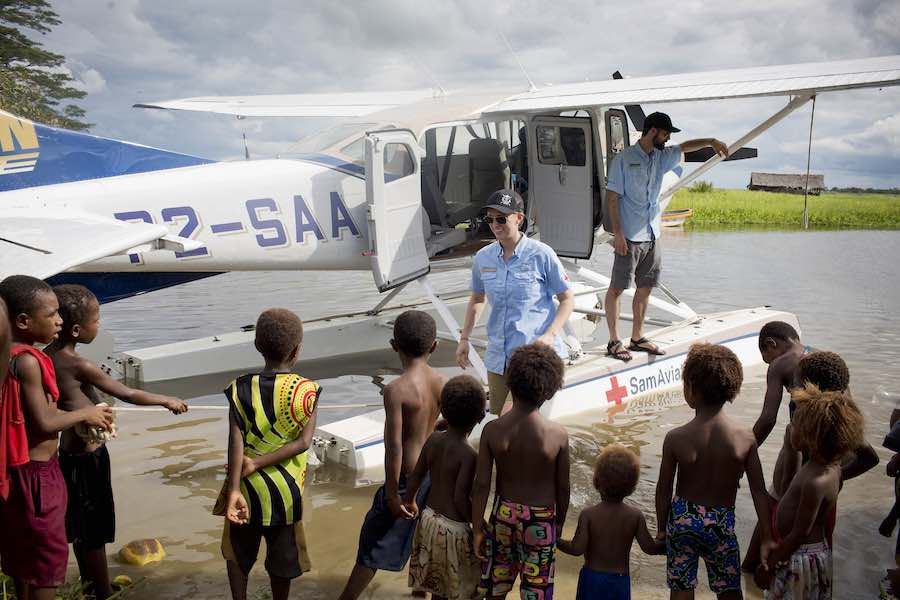 Tracy Hamer, a pilot with Samaritan Aviation, meets local children in Angoram, East Sepik Province, Papua New Guinea, where UNICEF is working to eliminate the threat of maternal and neonatal tetanus (MNT) through lifesaving vaccines. Tracy has a 5-month-old baby at home but regularly flies into remote regions to deliver essential vaccinations and medical supplies on behalf of UNICEF and other organizations. 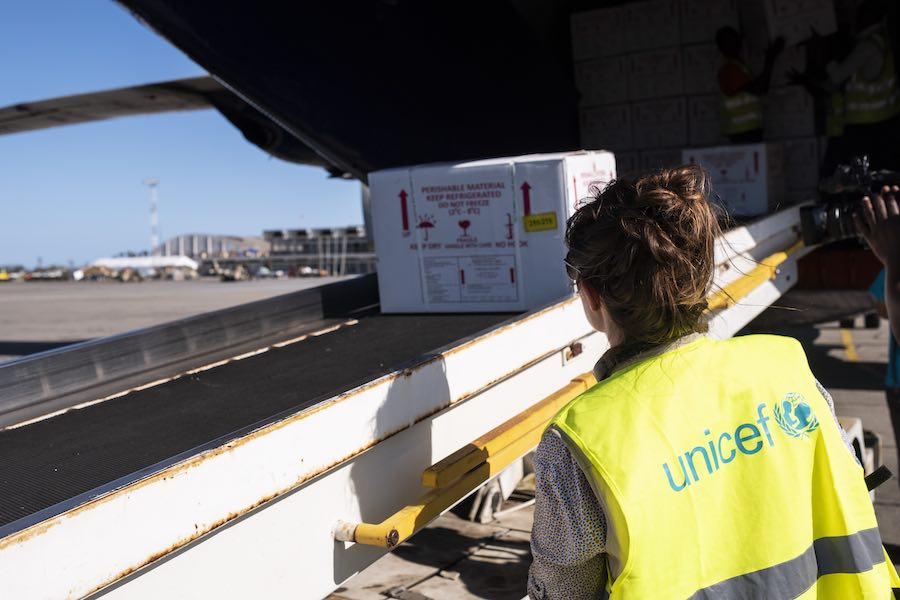 Once vaccines hit the ground, UNICEF workers make sure they are unloaded safely, then dispatched into the field. Here, cholera vaccines arrive in Mozambique, where Cyclone Idai — the deadliest storm to hit southern Africa in decades — triggered an outbreak of cholera. Cholera can kill within hours. But thanks to UNICEF's ability to send vaccines from its Copenhagen warehouse anywhere in the world within 48 to 72 hours, 900,000 people were reached with cholera vaccines just in time.

In the far corners of the world, where poverty, conflict and lack of access mean families need more help to care for their children, technical and diplomatic skills are a must for vaccinators. So are strong legs. 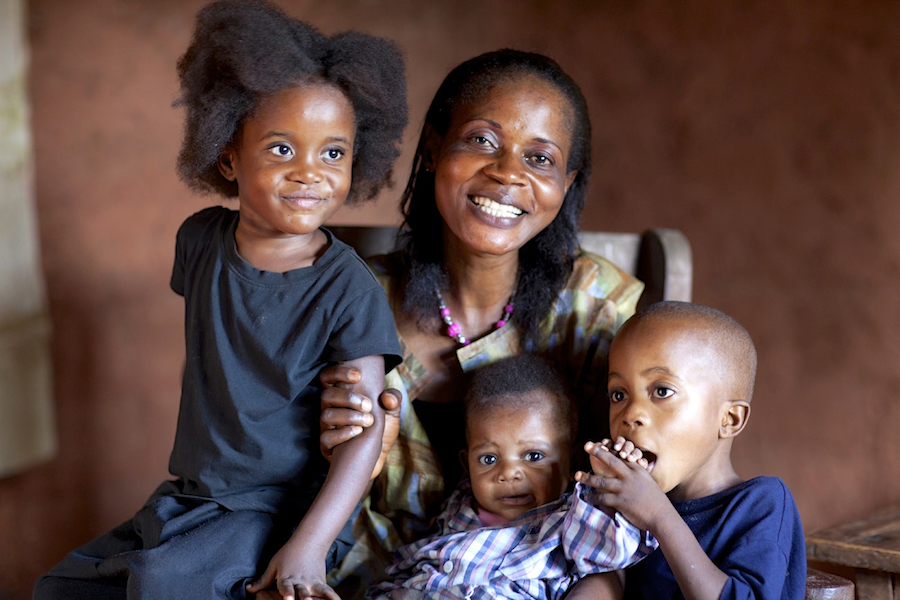 "We walk everywhere, even if it’s miles away, because we have no other means of transportation," says Mama Josephine (above), a volunteer vaccinator from the Democratic Republic of Congo (DRC). "Many of the places we need to reach are really remote and accessible only by foot." 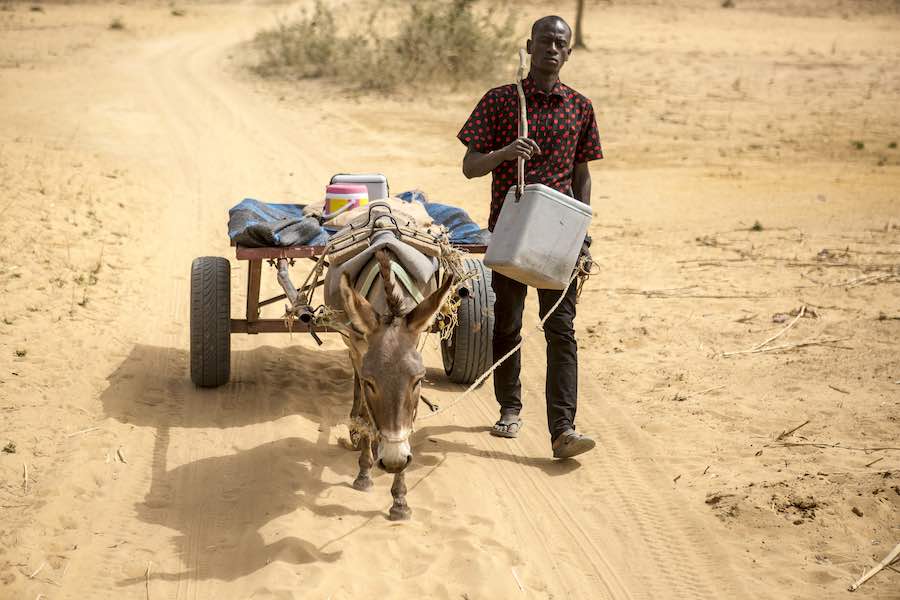 Mobile vaccinator Mamadou Kassé (above) has certainly logged many miles. He works out of a health center in Mali's increasingly volatile region of Mopti, where fear, insecurity and a ban on motorcycle travel have limited families' access to medical care. To vaccinate the children who can't come to him, Kassé loads up a donkey cart with vaccines, then travels for miles to reach remote villages. Reducing child and maternal deaths are priorities for the government of Mali, but today, every tenth child dies before the age of 5. For the vast numbers of children in Mali who are missing out on their recommended shots, dedicated health care workers like Kassé can mean the difference between life and death.

Though vaccinators like Kassé often work alone, sometimes entire health clinics are on the move. Hajiya Marufat Yusuf (above) is a nurse-midwife who leads a UNICEF-supported mobile clinic in Nigeria. Teams like hers ensure that children receive vaccinations against polio, measles and meningitis along with other essential health services, including vitamin A supplements and medications to fight infections like ringworm. They also advise mothers on other health matters, teaching them the importance of exclusive breastfeeding for the first six months of a baby’s life and the nutritional needs of growing children.

Vaccinators' journeys can be arduous. However, says Mama Josephine, the physical rigors aren't what's hardest. “What takes most of my energy is when I have to convince people."

Luckily, there are people on the ground to help make the case. Catherine K. Giah, a veteran of Liberia’s Spring 2015 polio-measles vaccination drive, is one such person. UNICEF social mobilizers like Giah travel with vaccinators but they also work as advance teams, fanning out to address the fears of reluctant parents.

When Ebola hit Liberia in 2014, the problem wasn’t so much the vaccine; it was parents’ shaken confidence in a health care system that had failed to save lives. Limited access to health care in remote regions was a major factor in the epidemic's spread. Other diseases spread, too, because parents who were unaccustomed to seeking medical care were mistrustful — even when the help came to them. “Parents hid their children," recalls Giah. "Some came down with the measles, so we told them that if you hide your child again, they will get sick.” 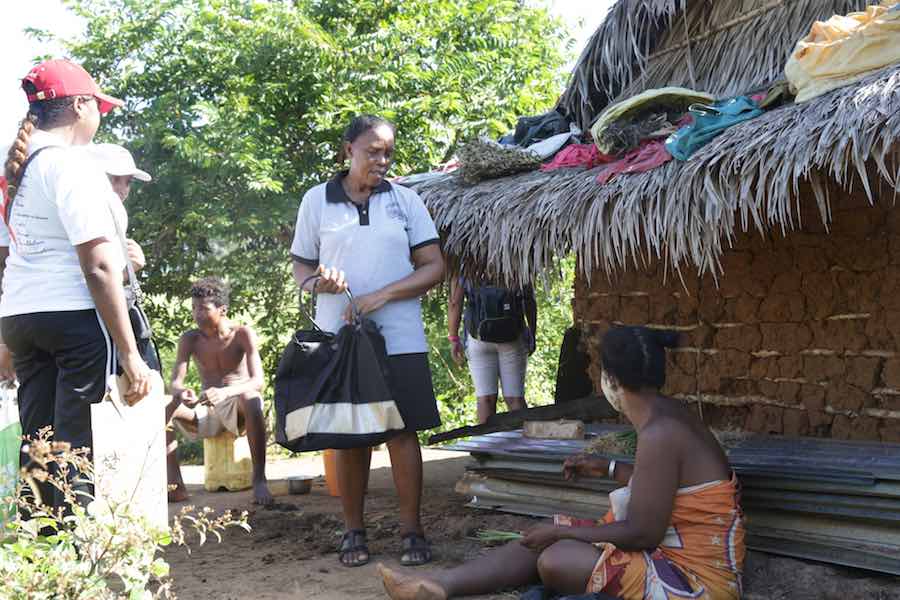 With measles on the rise around the world again, social mobilizers like Mamolololona (center, above) have their work cut out for them. Although there is a safe, effective vaccine that can protect children from this highly contagious disease, parents' inaction and reluctance in Madagascar, where Mamolololona works with UNICEF, fueled a 48 percent rise in measles cases from 2017 to 2018. From September 2018 through February 2019, 76,871 people were infected by measles, and 928 died, most of them children. To stem the tide, UNICEF is now supporting the Madagascar government to vaccinate millions of children. Health workers like Mamolololona, who walks for miles to counsel families on the benefits of vaccines, will be crucial to that effort. 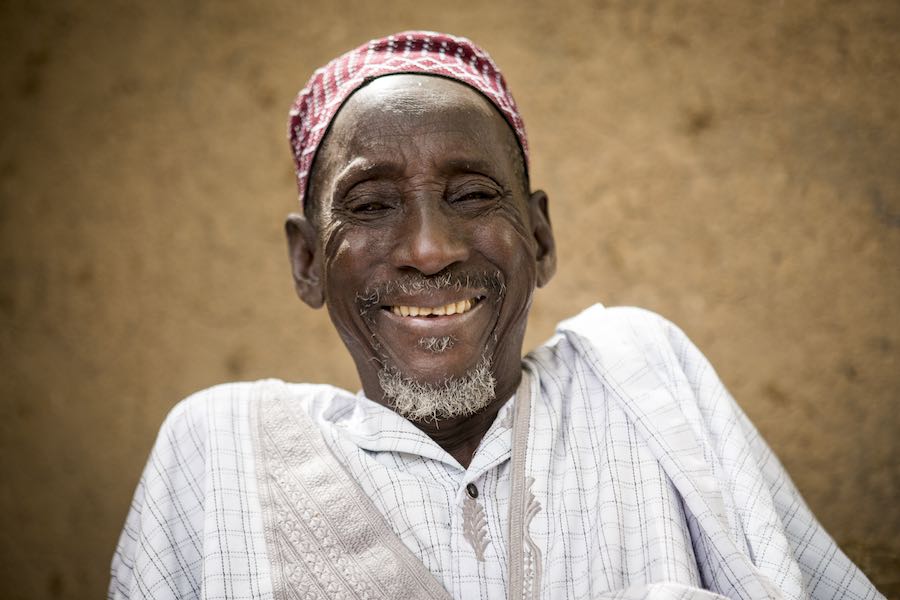 Faith leaders can also play a key role in dispelling fears about vaccines and helping to make immunizers' jobs easier. Gouro Barry, a village chief in Mali, is just one community leader UNICEF is depending on since sectarian violence triggered a five-fold rise in measles cases in 2018. Good word of mouth from respected leaders is essential to any public health campaign — especially when there's so much at stake. "It is a great opportunity to have a vaccinator who takes care of the children of the village," says Barry. His support will be crucial to the effectiveness of vaccination campaigns now underway during lulls in the fighting. 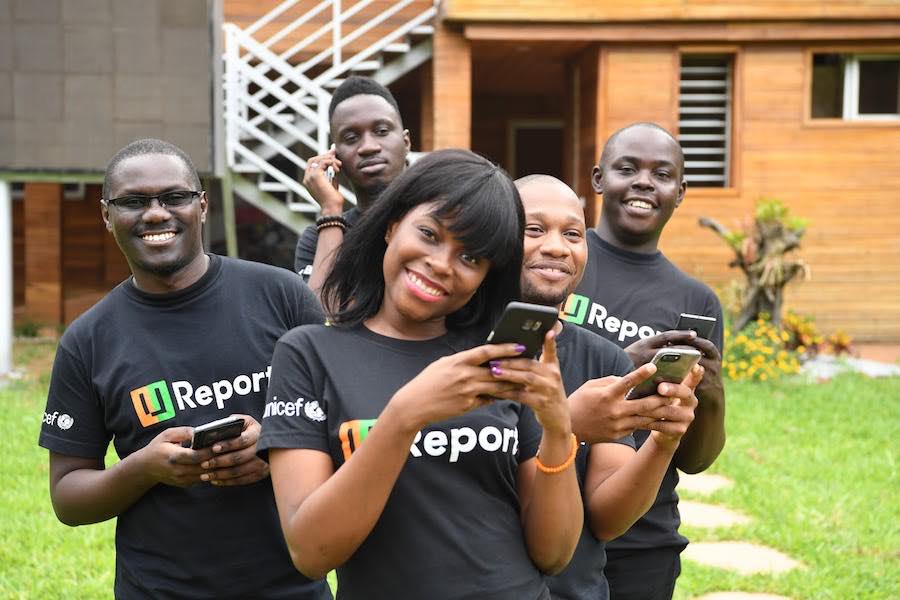 Young people are helping to get the word out about vaccines' lifesaving benefits, too. Using U-Report, a free, open-source social messaging tool developed by UNICEF, U-Reporters in Côte D’Ivoire (above) have supported recent public health campaigns to fight malaria and immunize children against measles. ‘‘It allows us to communicate directly in real time with health workers and beneficiaries about progress,” says UNICEF Côte d’Ivoire’s Bruno Aholoukpe of the tool young people use through SMS and other digital channels like WhatsApp. “U-Report makes the information exchange and addressing misconceptions instantaneous.”

It can take an army of people to immunize one child. In the end, however, it’s parents who make all the difference.

Uliana Dziuba, 36, brought her two young children to a clinic in Ukraine's Lviv region to take advantage of a UNICEF-supported immunization drive, which was launched after an alarming spike in measles cases. In Ukraine, there were more than 53,000 cases of measles in 2018. Another 24,000 people were infected in January and February 2019.

“I used to refuse to vaccinate the children against measles,” admits Uliana as she waits for her children to get their measles, mumps and rubella (MMR) shot. “Once, I refused because they were sick at the time. Another time, there was a very powerful anti-vaccination campaign on social media."

But after her daughter got measles at age 3, Uliana realized vaccines afforded the only protection. "I am vaccinating both of them for the first time today.” 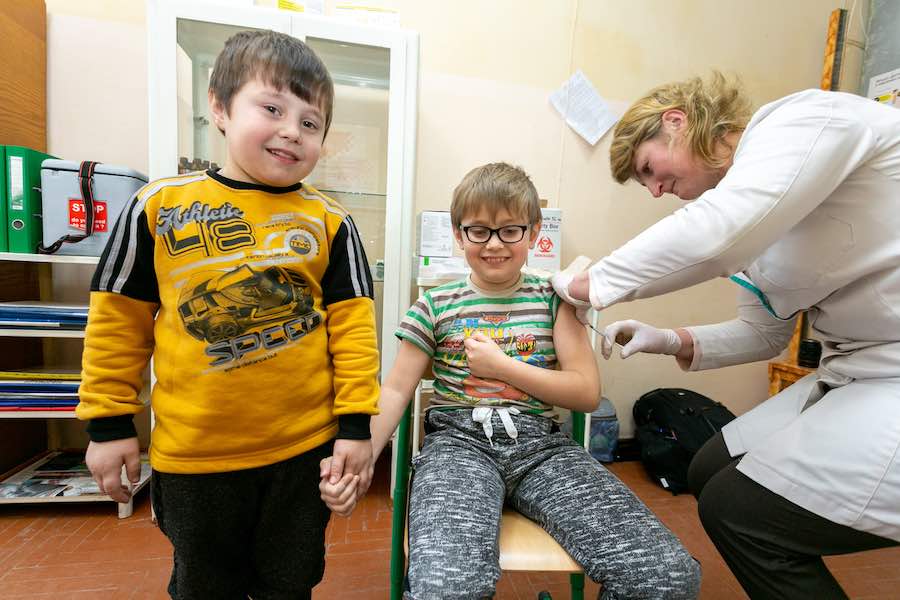 Bohdan Pauk (above) comforts his brother Liubomyr as he gets his MMR vaccination in the nurse's office of a school in Ukraine's Lviv region. The boys are 6 and 10 years old, but they only received their first vaccines in February. Their mother, Oksana, admits that she had been opposed to vaccination, but was persuaded otherwise by doctors. There are 50,000 unvaccinated children in Lviv, which saw approximately 11,000 measles cases in 2018. 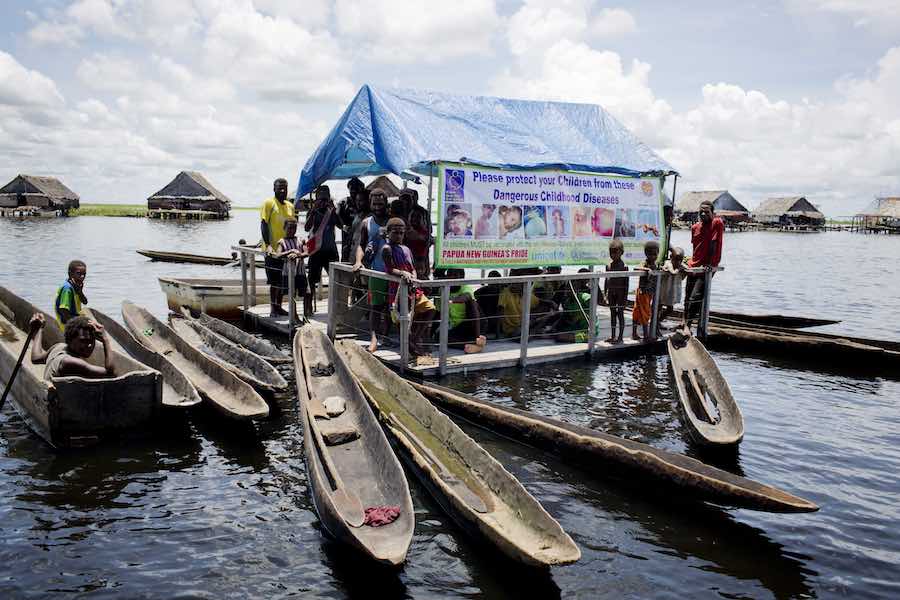 Vaccinators aren't the only ones who must be willing to travel to immunize every child. Families go to great lengths, too, for the chance to protect their children from deadly diseases. These dugout canoes belong to parents who traveled to have their children vaccinated against polio at a mobile health clinic in Papua New Guinea. In 2018, 26 children contracted polio after 18 years without any cases. The Centers for Disease Control and Prevention (CDC) reports that a drop-off in vaccination rates is the main reason for polio's reemergence. Polio is so infectious it can quickly spread from child to child — even from country to country. But UNICEF acted swiftly, and families are doing their part. A country-wide vaccination campaign has been launched in the hopes of making Papua New Guinea once again polio-free.

In 2013, after her daughter Maryam fell ill with polio, Aisha Umar (above) began volunteering during critical vaccination drives in Kano State, Nigeria. For her, helping to protect Nigeria's children from polio is very personal: “I will be so happy when Nigeria is polio-free," says Aisha, who hopes to spare other parents and children the anguish her family has suffered. What's more, national immunization campaigns include other lifesaving interventions, such as vitamin A supplements and nutrition screenings, that can make a huge difference in a child's overall health and well being. Equally important are the healthy habits children learn from those immunization sessions and the message they receive: Your life and your health matter.