Tapping Into Safe Water in Guinea

UNICEF's Water for Guinea project ramps up after seven years of success making safe water more accessible in vulnerable communities — a mission more critical than ever in the era of COVID-19.

For many people who live in Guinea, a largely rural country on the west coast of Africa, life is a daily struggle to meet even the most basic needs — needs like safe water for drinking and cooking, and for handwashing to prevent the spread of disease.

Three out of four households in two regions in particular — Labé in the north-central part of the country and N’Zérékoré in the south — do not have access to safe drinking water at home, according to a 2018 survey by UNICEF. And the task of fetching water, often from faraway places, almost always falls to girls. In rural parts of Guinea, as many as three out of four households lack access to safe water at home. Villagers wash clothes where they can. © UNICEF Guinea

In most villages and communes in these two regions, the roads are poor, which makes building a new water system the conventional way difficult due to the heavy machinery that requires.

And so UNICEF and partners are working to solve the problem another way: by manually drilling boreholes to tap into natural resources underground.

The Water for Guinea project, which launched in 2014 with support from Andy Astrachan, founder of the AJA Foundation, has so far reached some 120,000 people with improved access to safe water, working with local partners. Over the next two years, the project aims to deliver to 160,000 more.

The new systems are life-changing for families — especially for the girls for whom collecting water would often mean dropping out of school and an early marriage — and particularly with the onset of the COVID-19 pandemic, with safe water so fundamental to disease prevention. Project work has also been a boon for the local economy, creating jobs and income for small- and medium-sized enterprises that are contracted to do the bulk of it.

"Water for Guinea provides instant help," says Wendy Serrino, a former UNICEF USA Midwest Regional Board Chair and longtime champion of the initiative who recently traveled to Guinea with UNICEF to observe the work first-hand. "It's transformative."

A growing number of the new access points are connected to solar-powered water pumps — an upgrade from the more common hand pumps. For one thing, they can draw water from deeper depths; for another, they make the whole system more resilient. As an added benefit, the solar panels powering the water pumps can do double duty as a power source for community schools and health centers.

The project has gone so well that the national government has adopted the same approach for other areas in need.

for water for guinea story 700w.JPG 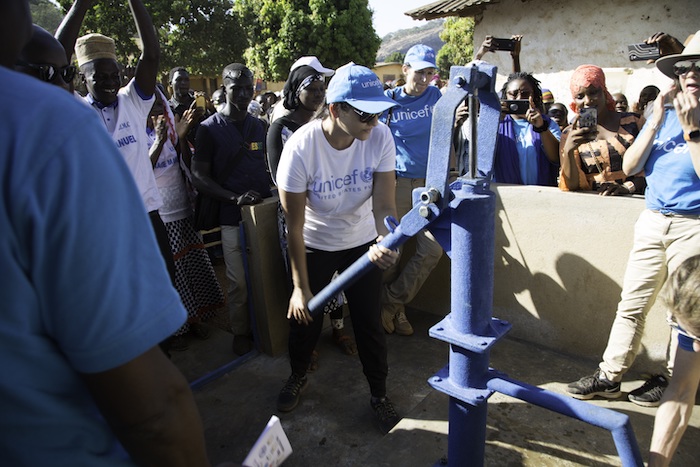 In addition to making safe water more readily available to households and communities, the project is also building local capacity for manual drilling work, by providing the tools and training. Community-run water commitees are also being established, and local members trained in how to operate and maintain the new facilities. Local leaders are also being enlisted to help raise community awareness of environmental and climate change-related issues that could cause contamination of water sources or water scarcity.

UNICEF estimates that it costs roughly $13 to provide an individual with safe water for 10 years through Water for Guinea. It costs $5,000 to provide a sustainable source to a whole village for generations.