UNICEF Ambassador Alyssa Milano traveled to Kosovo in May to participate in the commemoration of World Children's Day.

Of all my UNICEF field visits (I also spent time in Angola and India), visiting the settlement of Kolonia in western Kosovo ranked up there in the hardest experience I've had on a field visit. The inhabitants of Kolonia, and especially members of the Roma, Ashkali and Egyptian community, tend to live in large collective housing of comprising many families. Living conditions are very bad, lacking even basic infrastructure. One of the main problems is the waste dump of the city, which is located just 100 meters away from this neighborhood. To see people live in this kind of poverty is horrifying and unacceptable. 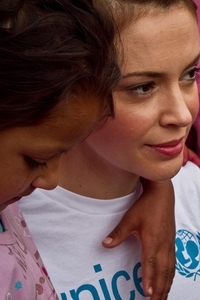 Elsewhere in Kosovo, there is still an unfortunate divide between the Serbs, Albanian and Roma communities. MitrovicÃ«/a the name itself is an indication of the ethnic divide that marks it is a city situated in the northern part of Kosovo. Eleven years after the conflict in Kosovo the city remains physically divided by a river, and politically divided along ethnic lines. The Kosovo Serb community lives in the north and follows the Serbian political and administrative system. The Kosovo Albanian community lives in the south and the local authorities belong to the Kosovo political and administrative authorities who declared independence in 2008. The Roma minority community lives on both sides of the river and it is the most marginalized population, vulnerable to extreme poverty and discrimination.

UNICEF is working with all communities. It has a sub-office located in Zvecan, a town north of MitrovicÃ«/a, and it works with all necessary institutions and communities in order to ensure access of all children to quality basic services, including education, health and protection from violence, abuse and exploitation.

Kosovo has the youngest population in Europe with over 50% under 25 years old. This is a tremendous wealth with extraordinary economic potential. This highlights the fact that economic development in Kosovo is not likely to happen unless we invest in the younger generation. It is crucial to allow children to dream and it's our responsibility to offer the opportunities to make those dreams their reality.

I would be remiss if I didn't add that Kosovo is a beautiful place.

It is much greener than I expected. There are rolling hills and beautiful wildflowers. The city of Pristina had surprisingly delicious food. In the evening the streets are full of young people participating in a thriving nightlife scene. It is Europe, after all, and you can certainly feel that culture of cafÃ©s and evening strolls when you're in the city. This, coupled with the fact that the authorities genuinely seem to be focused on the social betterment of the children of Kosovo, gives me great hope for its future.