Stories of Courage from Honduras

Barron Segar is the Chief Development Officer and Executive Vice President of UNICEF USA. Here, his notes from a recent field visit in Honduras.

Stories of families detained at the United States-Mexico border have captured the American public’s attention over the last year. UNICEF firmly believes that a child is a child, no matter her country of origin or where along his journey he may be — and children deserve to be protected.

While the situation at our border often generates headline news, the countries from which these children and families are migrating do not garner the same coverage. A primary aspect of UNICEF’s response to any mass migration is to work with local partners and governments to address the root causes. This is why I recently traveled to Honduras to meet with children, mothers, teachers, businesses, community organizers and government officials. I am humbled to share a few of their stories. 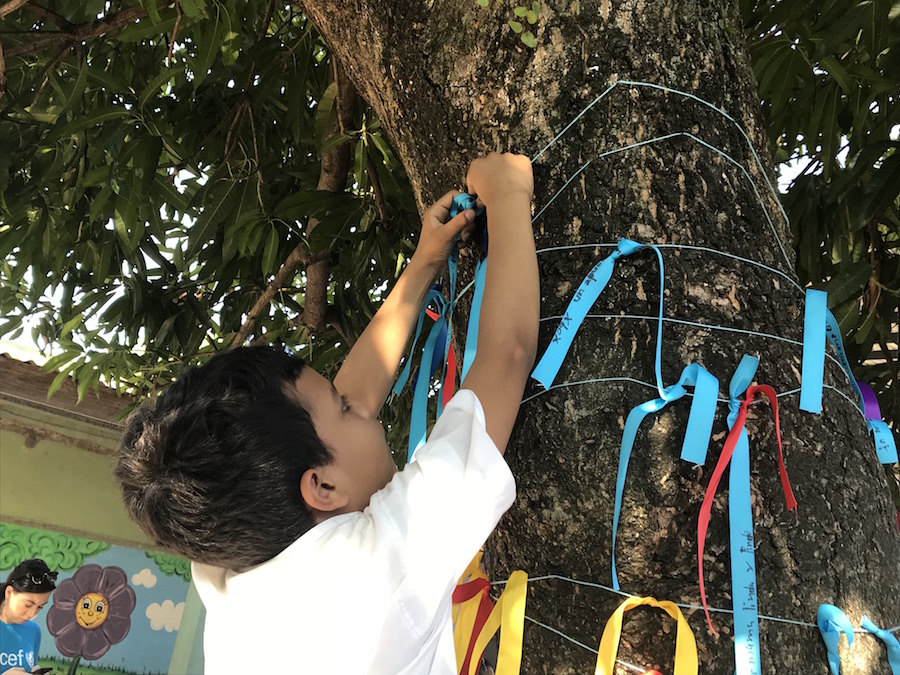 At Escuela Atenea in La Ceiba, in UNICEF-supported program Proyecto Crearte, students are encouraged to express their feelings about violence in their communities through a "feelings tree"; the students write their feelings and wishes on ribbons, and then hang them together on a tree. ©UNICEF/2019/Dineen

Early in our trip, I met a 16-year-old named Darwin. Darwin shared that he had been assaulted on three separate occasions while commuting to school – his bike and money stolen. The first half of Darwin’s story is indicative of one of the primary reasons that people flee Honduras. Violence, particularly gang violence, is pervasive.

But Darwin is determined to persevere. He continues to walk to school each day where he serves as a student leader, trained to notice when his peers are in distress and offer assistance.

A primary aspect of UNICEF’s response to any mass migration is to work with local partners and governments to address the root causes.

UNICEF supports similar programs throughout Honduras, ensuring that children have an outlet to express their fears and share their hopes, as well as programs that aim to reduce gang violence through improved communication and cooperation.

Darwin plans to become an industrial engineer. He is confident that if he continues to work hard, he will be able to contribute to a brighter future for a country he loves.

A brighter future for Hondurans also depends upon improved economic opportunity. Violence is one reason people choose to flee. Lack of jobs that allow them to provide for their families is another. 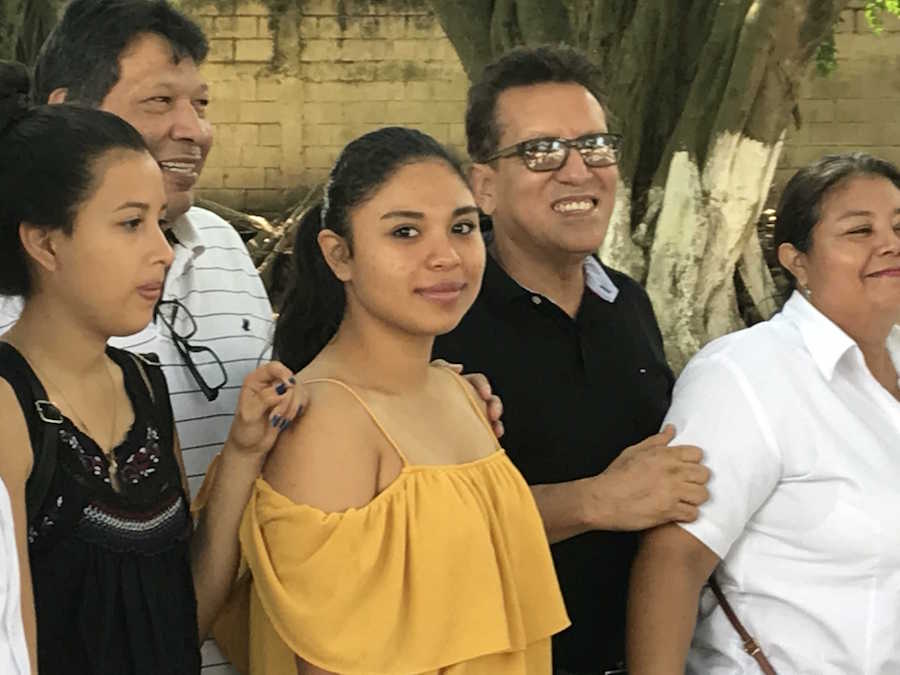 Carmen, 15, attends the Instituto Perla del Ulúa in El Progresso, a region plagued by poverty, gang warfare and an exodus of migrants. Aided in part by the UNICEF program Peace Co-existence and Citizenship, the school has improved the safety of the students and given them hope. "The youth are the future of Honduras," Carmen says. Her dream is to go to university and graduate as a psychologist. ©UNICEF/2019/Dineen

When I met with members of a Chamber of Commerce in San Pedro de Sula, I was so inspired by these men and women’s commitment to supporting the growth of local business. On the day of our meeting, the Chamber was hosting a market where some 300 community members were selling food, soap, jewelry and other crafts. They offer small business tools ranging from guidance in starting a business, to accounting, to growing public engagement through social media.

The Chamber of Commerce also plays a key role in advocating for anti-corruption and business-friendly government policy. By increasing transparency and spurring small business, they firmly believe the country’s economy will support a higher standard of living for its citizens. UNICEF joins local advocates in working with the government to pursue policies that put children first.

UNICEF firmly believes that a child is a child, no matter her country of origin or where along his journey he may be — and children deserve to be protected.

The final story that I’d like to share is one that began more than 25 years ago. During my visit, UNICEF colleagues arranged for me to meet a woman named Rosa. Rosa had been diagnosed HIV-positive as an adolescent. HIV rates were dangerously high in Honduras during the 1990’s, and, as such, the country was a priority for NGO investment in HIV and AIDS prevention.

Prior to joining UNICEF USA as a staff member, I served as a Founding Board Member of the Elton John AIDS Foundation – a role I still hold today. The first grant that we made to UNICEF supported HIV/AIDS programs in Honduras. I was overcome with emotion as Rosa explained that she was a beneficiary of that program.

“I would not be alive today without UNICEF and the Elton John AIDS Foundation,” she told me. 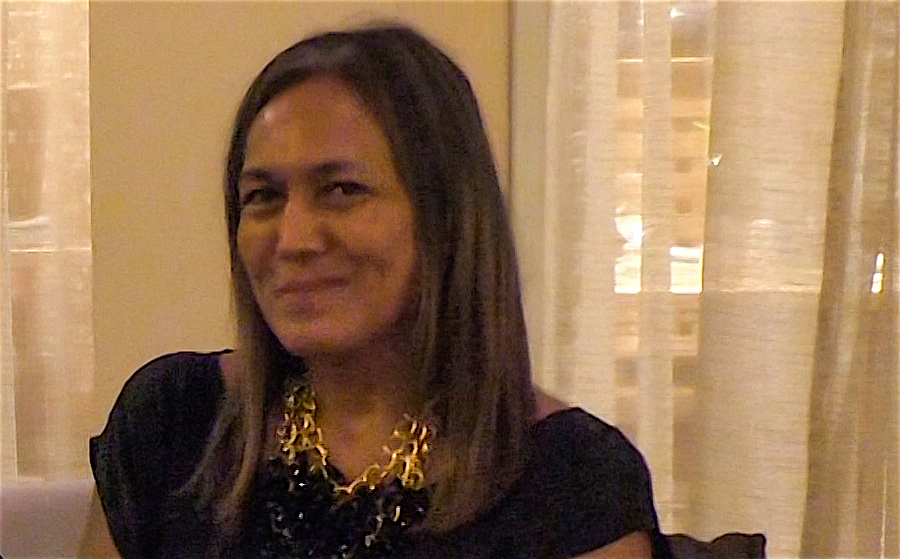 Rosa is an HIV/AIDS activist. “I would not be alive today without UNICEF and the Elton John AIDS Foundation,” she says. ©UNICEF/2019/Portillo

To me, Rosa’s story drives home two important messages. The first: Hondurans are amazingly resilient. Through epidemics, violence and poor economies, they do everything that they can to work toward a safer, more prosperous future for their country. It is so important to know that the young people in Honduras do not want to have to leave. We owe it to them to ensure that they do not have to.

The second message is that UNICEF truly supports vulnerable children and families before, during and after emergencies. UNICEF was there to combat the HIV scourge in the 1990’s and they remain to protect those in need today. The staff members in Honduras are warm, hopeful and dedicated. I am so proud of the work they are doing.

The men, women and children I met in Honduras generously shared more stories than I could hope to include in one article. They all carried the same theme – courage.

Banner photo: UNICEF USA Chief Development Officer and Executive Vice President Barron Segar at a community meeting in La Ceiba, where they discussed what drives young people from Honduras and how UNICEF can help. The young woman pictured, Andrea, supports her family by selling raffle tickets for clothing that she finds or has donated to her. ©UNICEF/2019/Portillo