Twice victims, girls who break free from an armed group's oppression can find themselves pariahs with no support upon their release.

When three armed men forced Mary* and her sister off a narrow road in South Sudan, the terrified 12-year-old started sobbing. But she had to dry her tears when the rebels threatened to kill her if she did not stop crying.

Now 16 and free, Mary remembers the day-long march that brought her to the rebels’ camp where she would spend the next three years, living in fear of brutal beatings and enemy attacks that sent bullets flying through the air.

"The most difficult thing since escaping has been remembering all the shooting. It was so indiscriminate. Whenever I think about it, I cry,” she says.

She now has a new life and attends primary school like many of the children UNICEF is supporting through its reintegration program, which helps children adjust with vocational training and counseling. But the memories are still there and so is the pain.

“I still get flashbacks and when I see a soldier with a gun, I am scared.” — Mary

“I still get flashbacks and when I see a soldier with a gun, I am scared.”

Mary’s trauma is all too common in the world’s youngest country, where UNICEF estimates 19,000 children have been used by armed forces and armed groups since the conflict started in 2013.

Even when children escape or are released, their ordeal continues. With millions of people on the move, seeking shelter from the sporadic fighting or relief from chronic hunger, and with basic infrastructure in ruins, many struggle to find their loved ones.

UNICEF helped secure the release of 955 children from armed groups in 2018 and more release ceremonies are planned for 2019. With partners, UNICEF helps trace and reunify children with their families and see that they get the support, education, vocational training and economic opportunities they need to reintegrate within society.

Despite that help, transitioning back into civilian life is extremely difficult no matter how children spent their time during their conscription. Although many children are forced to carry a gun, not all children actually take part in the fighting.

"They tied our hands very tightly with rope and then gave us things to carry. We had to run sometimes — if we slowed down, they hit us with sticks." — Rose

Mary was forced to fetch firewood and water for the rebels. They trained her to use a gun, but only older girls were given their own weapons. Punishments were severe.

“They would beat us thoroughly and then make us crawl on our elbows and knees and it would tear the skin from our elbows.”

After she escaped, Mary feared the fighters would capture her again but now she is living with a new family and going to school, taking notes in neat handwriting and trying to make up for the lost years.

“I have some problems reading and can’t recall how to write but it is getting better,” she said.

In communities controlled by local militias, children might even join the armed group, believing they have no other way to survive. Esther, sitting with her newborn baby wrapped snugly in a pink blanket on her lap, "voluntarily" signed up with an armed group four years ago when she was 14. She had left school and felt she had no other option. 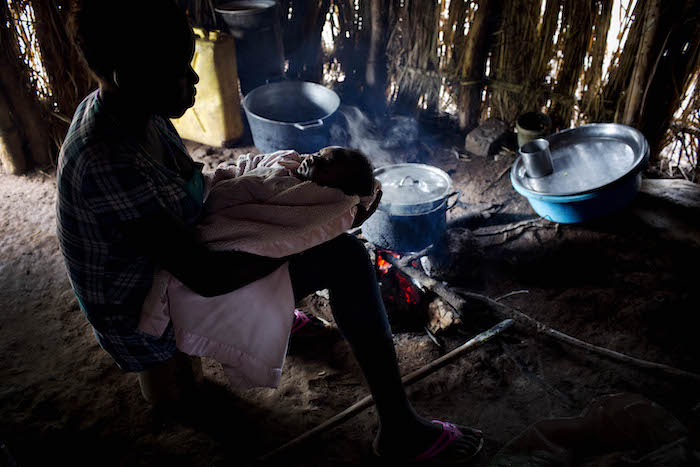 Not all children are forced to join armed groups. Some like Esther, who sits here with her newborn, signed up at age 14 because she saw no other option.

Like Mary, Esther remembers terrifying gun battles and her fear of dying as she watched others fall. Despite all this and regular beatings, membership in an armed group gave Esther something that helped her make it through each dark day: the illusion of control.

“I liked having a gun and being a soldier. It is why I joined … I felt I had a purpose and something to do every day. I had wanted to be one of those soldiers who had power and a job,” she says.

Helping children rejoin society is no easy task. Justin Augustino Kirima sees firsthand how difficult it is for children to readjust. He runs a vocational training center in Yambio, where former child soldiers are taught skills such as tailoring, carpentry and construction.

Even when children escape or are released, their ordeal isn't over. With millions on the move, many struggle to find their loved ones.

“At the start, it was very hard. They wouldn’t listen to their instructors and they were hostile. When you told them what they were meant to do, they were not interested,” he said, adding that those who got counselling had an easier time recovering.

Rose, 17, is struggling to come to terms with the three months she spent with an armed group after they abducted her from the home she shared with her husband.

“They treated us badly. They tied our hands very tightly with rope and then gave us things to carry. We had to run sometimes — if we slowed down, they hit us with sticks. I fell once, and they caned me many, many times. I nearly died,” she says at a Child Transit Center where she is temporarily staying. 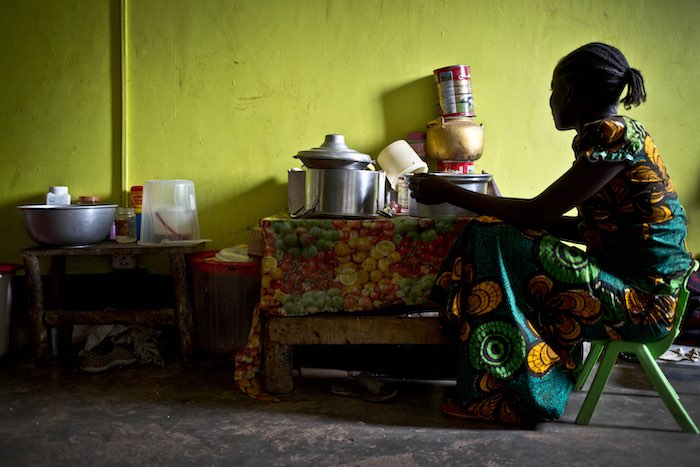 At a Child Transit Center in Yambio, South Sudan, Rose, 17, is recovering from the repeated beatings she received at the hands of the armed group that abducted her from her home in September 2018. Married at a young age, she was held against her will for three months, but her husband hasn’t made clear whether he will welcome her home after the violence she suffered. © UNICEF/UN0272661/Holt

Rose, whose arms are speckled with scars from her time in the camp, fell sick but she still had to work, cutting grass with only her hands as tools and collecting poles for construction.

When she refused to be a soldier’s girlfriend, he raped her at gunpoint. Eventually, some of the rebels took pity on her and set her free. But she still struggles with her memories of the rape, and she does not know what her husband will do when he finds out.

Although Mary, Rose and Esther are now free, UNICEF South Sudan still has a long way to go — working with the government and armed groups — to liberate the thousands more still caught up in the nation's conflict.

Around the world, UNICEF has helped more than 8,700 children released from armed groups reintegrate into civilian life and find their families since 2017. UNICEF and partners provide released children with medical care, counseling, education, vocational training and a safe place to live while they recover from the trauma they've experienced.

Please support UNICEF's work around the world to free child soldiers and reunite them with their families.

UNICEF and partners are working tirelessly in South Sudan, Syria, Yemen, Bangladesh and around the world to save and protect children. With a presence in 190 countries and territories, UNICEF has helped save more children's lives than any other humanitarian organization in the world.

*Pseudonyms have been used for all the children to protect their identities.

Top photo: Mary, 16, is now back in school in Yambio, South Sudan. She’s come a long way since the day she was abducted by an armed group at age 12, along with her older sister. They both were beaten and tortured during their time with the group, and only narrowly escaped. There are still an estimated 19,000 child soldiers still in armed groups in South Sudan. © UNICEF/UN0272634/Holt