Sinjar's Children Are a Long Way From Home

"We are working around the clock to deliver aid to people who have been brought off the mountains."

Two weeks ago, thousands of families and children from Iraq's Yazidi minority fled to Sinjar Mountain fearing for their lives and were trapped without food, water or shelter.

Today, many of these families have escaped to safer havens. Thousands spent days walking, passing through Syria before traveling back into Iraq's Dohuk Governorate. Some remained at displacement camps in Syria. There is little prospect these refugees can return to their homes in the near future. 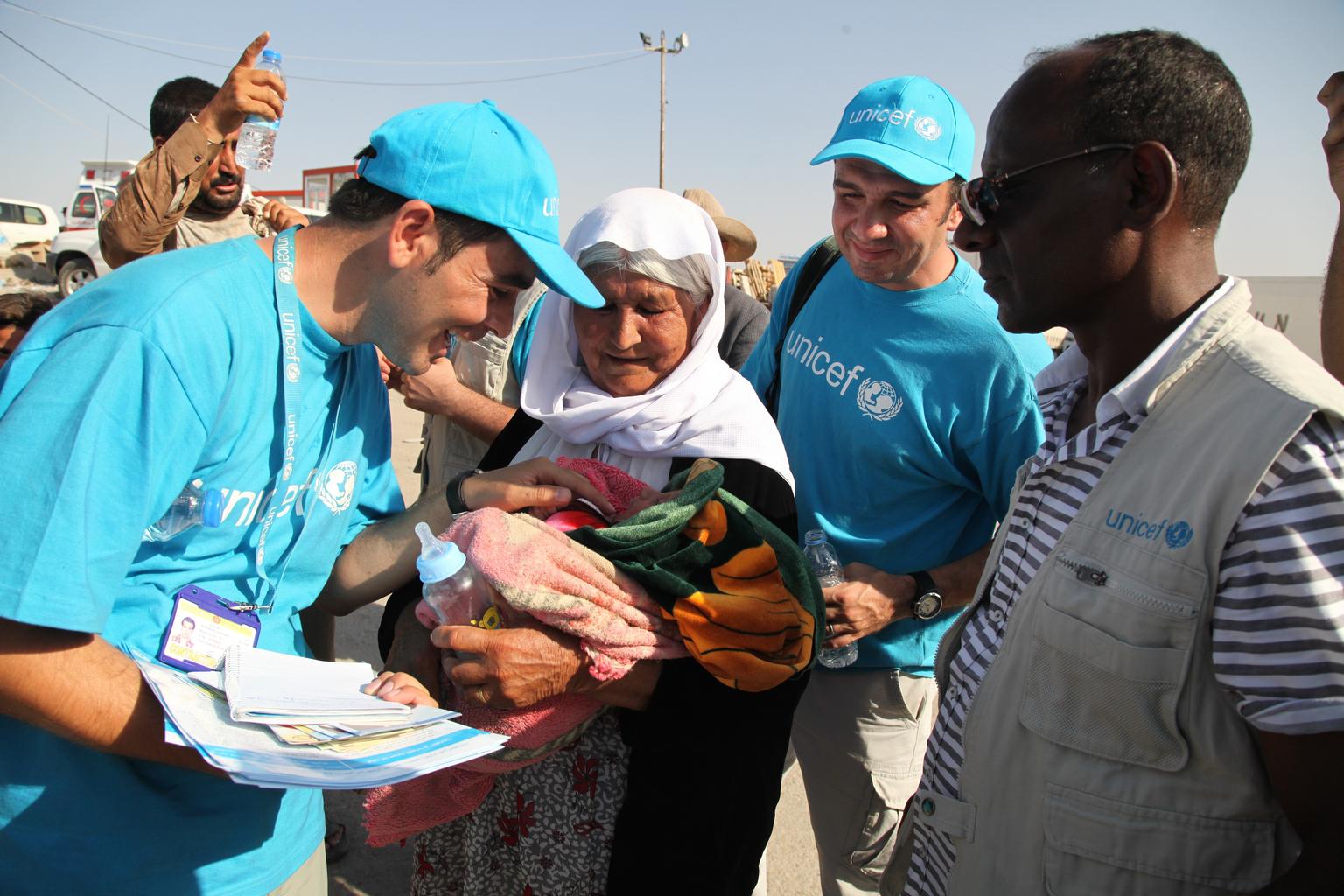 UNICEF workers with a 13-month-old Yazidi infant held by an elderly woman in the town of Peshkhabour in Dohuk Governorate. The woman had just re-entered Iraq after a grueling journey on foot from Mount Sinjar, into Syria, and back to Iraq.  © UNICEF/NYHQ2014-1116/Khuzaie

Children and Women with Immediate Needs

Survivors of the offensive by armed groups in Sinjar district have been traumatized. Many suffered from dehydration, exposure, malnourishment and shock. Some gave horrifying accounts of killing, abduction and sexual violence perpetrated against women and children.

The violations against children...among the worst seen in this century.

Said UNICEF Iraq representative Marzio Babille, "The type and scope of violations against children, women and minority communities in Iraq in the past weeks is one of the worst seen in this century, and is completely unacceptable by any standards or codes of conduct that govern conflict.”

UNICEF Iraq has been working around the clock to deliver aid to people brought off the mountains as well as families sheltering in the Kurdish capital, Erbil. Since August 2, UNICEF and its partners have distributed humanitarian aid to over 70,000 children, women and families in 20 locations in Dohuk Governorate alone: bottled water, emergency food rations, hygiene kits, jerry cans and blankets. UNICEF has also provided psychological support and care to more than 3,000 distressed refugee children.

The new wave of displacement has given increased urgency to a UNICEF-supported polio immunization campaign that kicked off last week in the face of the ongoing violence.

"The campaign comes at a critical time while the country is witnessing a huge internal exodus of children fleeing violence and turmoil," said Marzio Babille. "This is a top priority for UNICEF. No child should be missed. No child should be paralyzed. 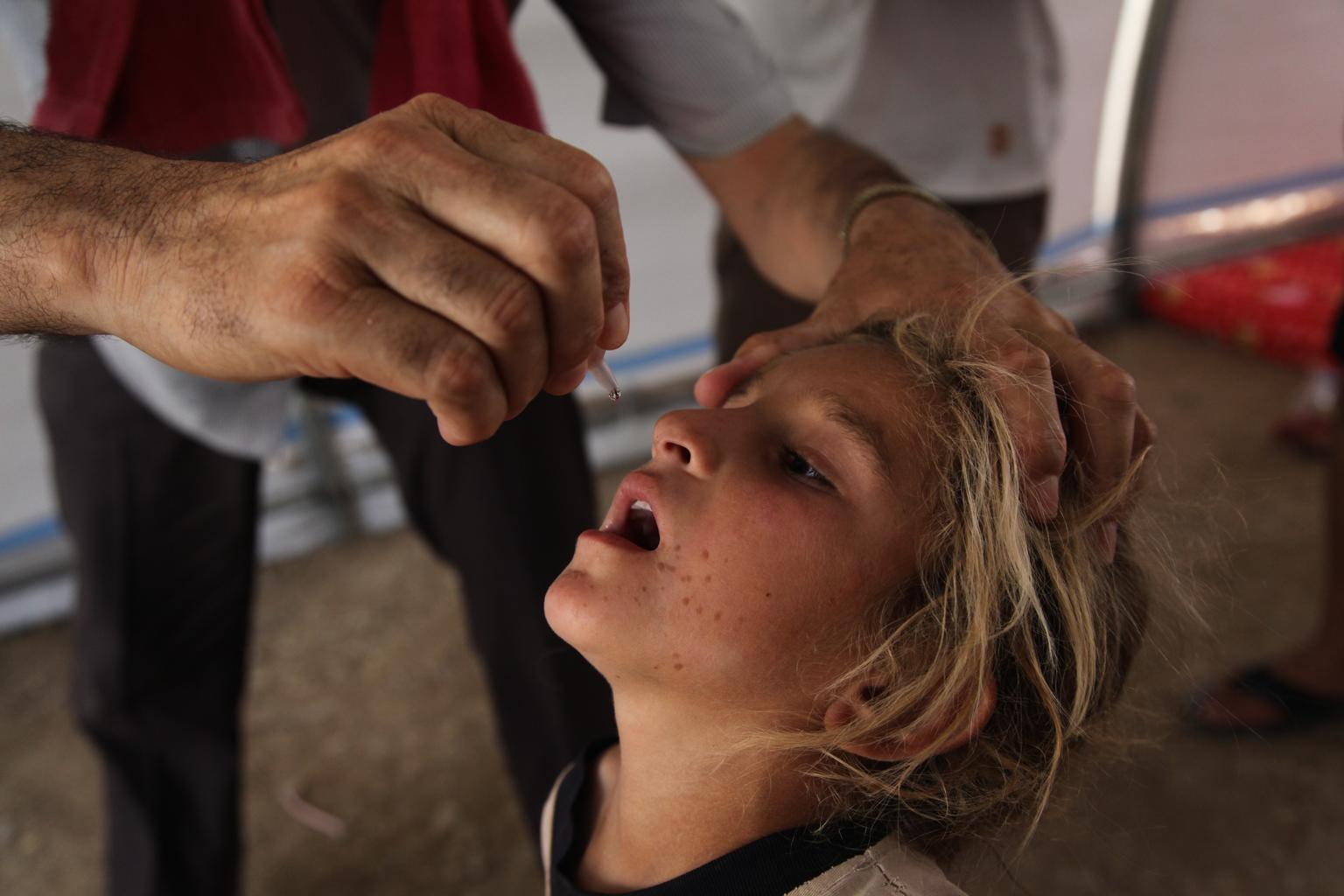 A health worker administers oral polio vaccine to a displaced Yazidi girl in the Bajeed Kandala camp near the Syrian border. © UNICEF/NYHQ2014-1116/Khuzaie

UNICEF spokesperson Juliette Touma noted both the need for the campaign and the challenges it faces in this New York Times article. With two confirmed cases of polio after 14 polio-free years, Iraq is extremely vulnerable to a wider outbreak of the crippling disease. Seven countries are part of the UNICEF-supported campaign to reach 25 million children with polio immunization in response to the regional outbreak that began in Syria.