Signs of Hope in Bangladesh

Dr. Dolores Rice Gahan, an osteopathic physician based in New York, has been a member of UNICEF USA's Board of Directors since 2003. She recently traveled to Cox’s Bazar, Bangladesh for a firsthand look at UNICEF’s relief efforts for Rohingya refugee children and their families.

When I first arrived at the Jamtoli camp, one of more than a dozen that have sprung up in the past year to shelter Rohingya refugees fleeing horrific violence in Myanmar, I was struck by two things: how massive the place was, and how vibrant. 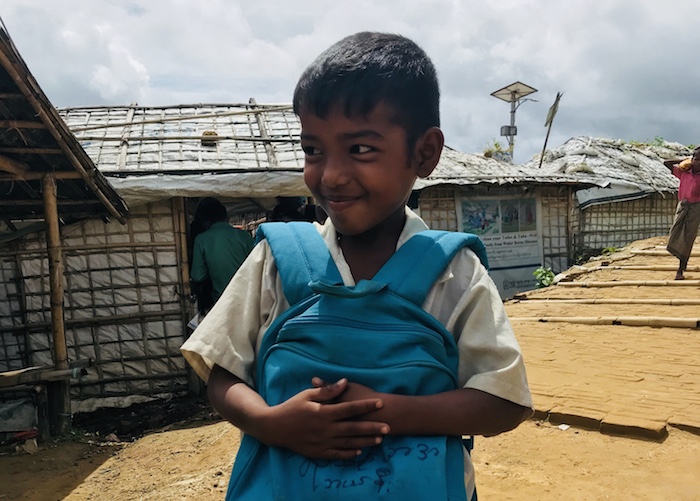 A young boy at the Jamtoli refugee camp in Bangladesh hugs his UNICEF backpack and gives a visitor a shy smile. ©Dolores Rice Gahan for UNICEF USA

I had read the news reports of course — upsetting accounts of the brutal ethnic cleansing campaign that forced the mass exodus of the Muslim minority from Myanmar's Rakhine state. Before our group arrived in Bangladesh, we were all thoroughly briefed on what so many Rohingya men, women and children have suffered, and the many hardships they continue to endure. I understood from UNICEF's latest report how, for an entire generation of young people, the future remains uncertain.

And yet. Once I am actually here in the camp, I encounter an unexpectedly upbeat vibe. Children are running around, singing, smiling and playing. Some are shyly approaching, curious about the visitors walking the same narrow dirt paths they walk to get to a UNICEF Child-Friendly Space, the WASH station and the health clinic. 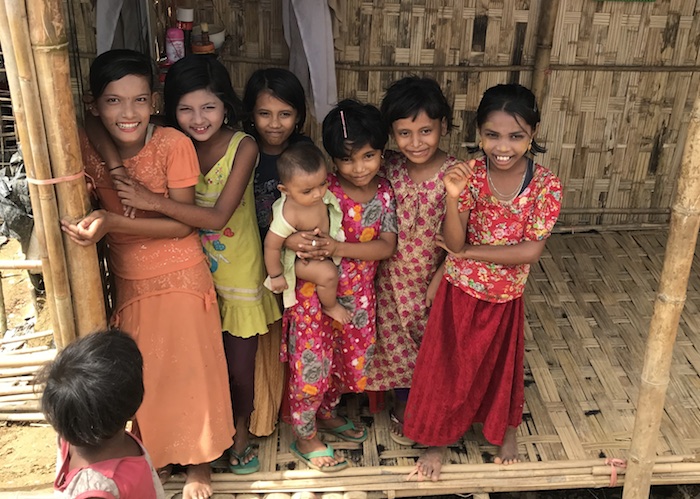 Kids help take care of one another in Rohingya refugee camps in Bangladesh. ©Dolores Rice Gahan for UNICEF USA

The place is bustling. It's monsoon season, so there are tented homes and latrines and water systems to relocate and reinforce against the inevitable heavy rains. There are new garden plots to tend, food vouchers to redeem, lessons and games to organize. People are busy, connecting with aid workers, nutritionists, teachers, counselors — and one another. Seeking help, pitching in.

During my three-day visit, I spent some time inside a youth center, where some teenage girls were working on an art project. They were drawing flowers in pretty patterns, which they would later cut out to be used as decoration. The girls had drawn landscapes the week before, scenes from their journey across the border. They had taken their drawings to some of the elders, offering them as gifts. 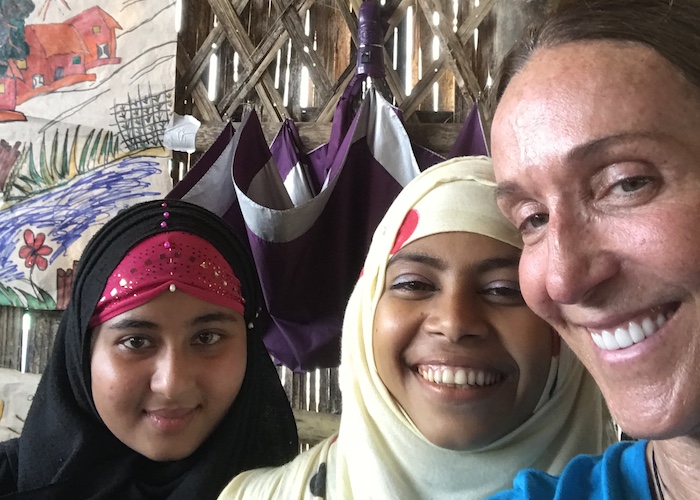 My selfie with Yasmin, center, and a friend at the UNICEF-supported youth center. You can see a bit of the girls' artwork hanging in the background. ©Dolores Rice Gahan for UNICEF USA

Yasmin, 15, a regular at the youth center, told me she wants to become a lawyer someday. For the time being, though, she was a young journalist, snapping photos, interviewing other kids and compiling their stories. For Yasmin and her friends, having somewhere to go every day, a place you could walk to with your friends, a safe environment for learning, creating and socializing — this was a new kind of freedom. Back home in Myanmar, the girls told me, they would never have been allowed to leave home without their parents. 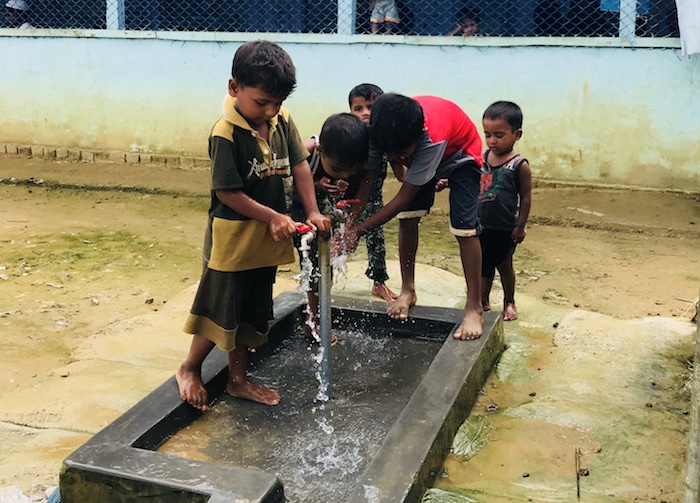 On Day 2 of our visit, we stopped inside a UNICEF-supported health center in Moinerghona, another camp site not too far from Jamtoli. The facility was amazingly clean and neat and organized, with separate areas curtained off for pediatrics, adolescent health and prenatal care. Patient records were handwritten in spiral notebooks. The staff schedule and patient list were posted on the wall. I watched the pharmacist carefully draw step-by-step dosing instructions for a patient to make sure no detail was lost in translation.

It was humbling how open people were, their willingness to talk about what they had experienced. One mother told me how she had lost her husband and one of her children during an attack on their home village. She told me how she had been beaten and stabbed, showing me the scars on her head and belly. The woman managed to cross the border into Bangladesh with her one surviving child, and had since taken in some other children who had come to the camp unaccompanied. Though she had lost so much, she would go on, she would do what she could. 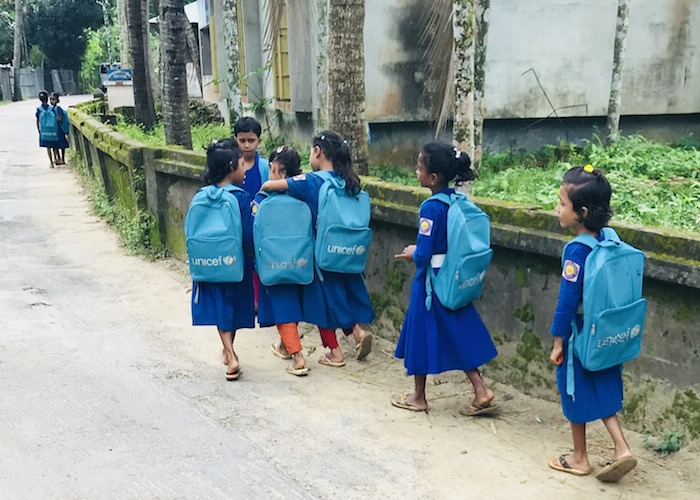 In addition to working inside the refugee camp, UNICEF is providing education support in the surrounding host communities. ©Dolores Rice Gahan for UNICEF USA

I went to Bangladesh to get a better understanding of one of the worst humanitarian crises of our time. I wanted to learn, and I wanted to bring back stories to share with my own daughters and other young people. But I gained something more: a first-hand look at how expertly UNICEF leverages its resources and partnerships on the ground, to make sure every dollar is put to good use. I returned from Bangladesh with my long-standing message to donors intact: Your money is well spent.

I hope these stories and messages that I bring back from my travels continue to help raise awareness of the needs of the world's most vulnerable children, and the important work UNICEF is doing, day in and day out, year after year, to meet those needs. When you go into the field, as I have done multiple times over the years, you can really see the good that is being done. And it stays in your heart forever.

I feel especially proud knowing that the UNICEF USA Bridge Fund was able to expedite critical funding support as the crisis was first unfolding, and enable such a rapid response. Because of the Bridge Fund, UNICEF was able to deliver tens of thousands of education kits, hygiene kits, sanitation kits, therapeutic food cartons and other assistance during those first critical weeks and months.

Please help UNICEF continue to help Rohingya children and families. With UNICEF, you can be confident that your contribution will be used responsibly and efficiently.

Top photo: Some 920,000 Rohingya refugees from Myanmar are living in settlements like this one in the Cox's Bazar district of Bangladesh. ©Dolores Rice Gahan for UNICEF USA