Shut Out Trafficking at University of Nebraska: A student perspective | UNICEF USA

Shut Out Trafficking at University of Nebraska: A student perspective

This year, the End Trafficking project has partnered with the National Consortium for Academics and Sports (NCAS) to implement Shut Out Trafficking on ten university and college campuses across the US to raise awareness and promote action to end human trafficking. This story features highlights from the week, which took place between April 12-18, 2015. This is part of a series on the 2014-2015 Shut Out Trafficking initiative. This blog post was written by a student at the University of Nebraska who took part in his school's Shut Out Trafficking week.

Shut Out Trafficking at the University of Nebraska-Lincoln was successful in engaging close to 4,000 students, student-athletes, staff, faculty, and community members. The week-long program consisted of an advocacy day on the student quad, a Fair Trade fair, a film screening and discussion of the documentary Not My Life, a roundtable discussion which Attorney General of Nebraska, Doug Peterson, attended and spoke at, softball and baseball games dedicated towards human trafficking awaress, and a 1-mile community walk to raise awareness about sex trafficking in Nebraska. 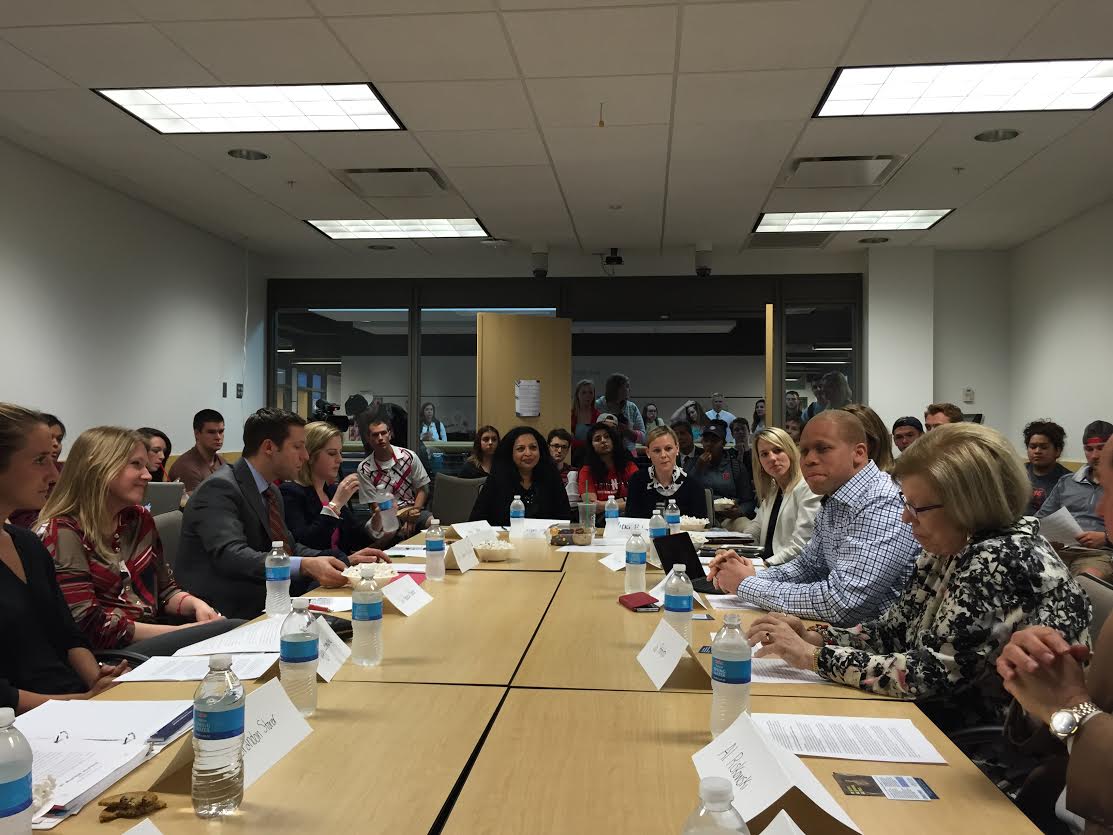 As part of the advocacy initiative, Associate Athletic Director and professor at the School of Journalism, Dr. Jamie Williams, assigned his journalism class of 120 students the task of covering the week through different media mediums: blogging, writing articles, social media, photojournalism, and videography. The below post was written by one of the students in Dr. Williams class about Shut Out Trafficking week.

By Matt Reynoldson, freshman at University of Nebraska-Lincoln

There are more than 29 million people around the world enslaved today, according to activists. Human trafficking is a $150 billion business.

Now, University of Nebraska-Lincoln students and faculty are teaming up to do something about it.

Sriyani Tidball, a College of Journalism and Mass Communications professor and one of the leaders of the Shut Out Trafficking movement, noticed that UNL students do not differ from their generation’s trend.

“When you look at the research on millennials, it says that they are very interested in social justice,” Tidball said. “They want to be part of the change that needs to happen.

“When you hear about all these girls being taken into slavery, it just hits you that it could be someone like the girl next door or even your daughter or sister. I think the steam is gathering because people are identifying with it – but it’s still a hidden problem.”

Tidball, originally from Sri Lanka, first got involved when she and her husband founded a social service organization. She saw firsthand how young boys were taken from their families for sex trafficking.

Tidball pointed out it’s a huge sign of progress that Nebraska Attorney General Doug Peterson put human trafficking as one of the two main priorities for his term. A law has already advanced in the Legislature that will work to shut out human trafficking for good.

"In Nebraska, one of the challenges we have is that the penalties currently in our laws are not strong enough, and what that does is it sends a message to those who traffic young people that Nebraska is a safer state to practice this illegal act than in others,” Peterson said in an interview with KETV Omaha.

Students are often the basis for awareness of social injustice, and when laws are passed to prevent things like human trafficking, groups like the Nebraska University Students Against Modern-day Slavery (NUSAMS) see their hard work pay off.

But it’s not just NUSAMS making a difference on the Shut Out Trafficking front.

Morgan Mallory, a sophomore audiology major from Grand Island, donates 40 percent of her profits from her photography company, MQM Photography, to Rapha House, a non-profit organization that exists to “love, heal, and rescue children that have been a part of human trafficking.”

“The cause really touched my heart,” Mallory said. “The betrayal, depression, and abuse the women go through is heartbreaking.”

Enough students are getting involved in the Shut Out Trafficking cause that University of Central Florida professor and human trafficking activist Richard Lapchick, founder of the National Consortium for Academics and Sports, decided to include UNL as part of his national Shut Out Human Trafficking awareness campaign.

With UCLA and Alabama joining the campaign in the coming weeks, Lapchick made the aim to promote awareness through two key groups: athletes and journalists. He enlisted the help of Jamie Williams, an associate athletic director and sports communication professor at UNL, to get these two parties involved.

“The JOMC 150 class (sports communication) changed the paradigm for promoting the Shut Out Trafficking Awareness campaign,” Williams said. “The students got a chance to contribute real work to the international and domestic effort to eradicate human trafficking.”

Sarah Wilbanks, an End Trafficking Fellow for the U.S. Fund for UNICEF, was also impressed by the impact that students made during the week.

“Students at UNL were amongst the most dedicated and active that I have seen throughout this entire initiative,” Wilbanks said. “Knowing that such a strong student movement and mobilization effort exists at UNL makes me confident that support for the cause will continue to grow.”

But even though the cause has gained so much steam, Tidball said recent trends indicate that trafficking is showing no sign of slowing down.

“To see that the industry value has increased five times the amount that it was, it’s shocking,” Tidball said. “Survivors understand the problem, and they understand they have paid a heavy price, but their goal is to make things better for the next generation.”

Tidball explained that students, especially those involved in journalism and the media, have a responsibility for social change.

“There’s a huge role to keep things in the forefront,” Tidball said, “not only for awareness but also to make people see it and recognize it so nobody can just get away with it.”

According to experts on the subject, anti-trafficking laws help the cause tremendously. But it starts with awareness, and Tidball believes students at UNL have the ability and the drive to change the world.

“You don’t have to convince them,” Tidball said. “They want to be world-changers and they have the platform to do it. It’s all about taking the responsibility to make the change happen.”