This year, the End Trafficking project has partnered with the National Consortium for Academics and Sports (NCAS) to implement Shut Out Trafficking on ten university and college campuses across the US over the next year, in an effort to raise awareness and promote action to end human trafficking. This blog posts features Shut Out Trafficking at Saint Johns University in Queens, NY, which took place between October 20-25, 2014. This post is part of a blog series on the 2014-2015 Shut Out Trafficking initiative.

Shut Out Trafficking at St. John’s University kicked-off with a co-keynote presented by Dr. Richard Lapchick (Graduate in ’67) and Emily Pasnak-Lapchick. Dr. Lapchick is a human rights activist, pioneer for racial equality, internationally recognized expert on sports issues, scholar, author, and St. John’s alumnus. He spoke on his experiences fighting injustice through sport and was followed by his daughter, Emily Pasnak-Lapchick, who shared her experiences combating human trafficking at the U.S. Fund for UNICEF. Attended by over 650 students, alumni, and professors, this event marked the beginning of Shut Out Trafficking Week on campus, which included programming around the issue of human trafficking, film screenings, panel discussions, and more. 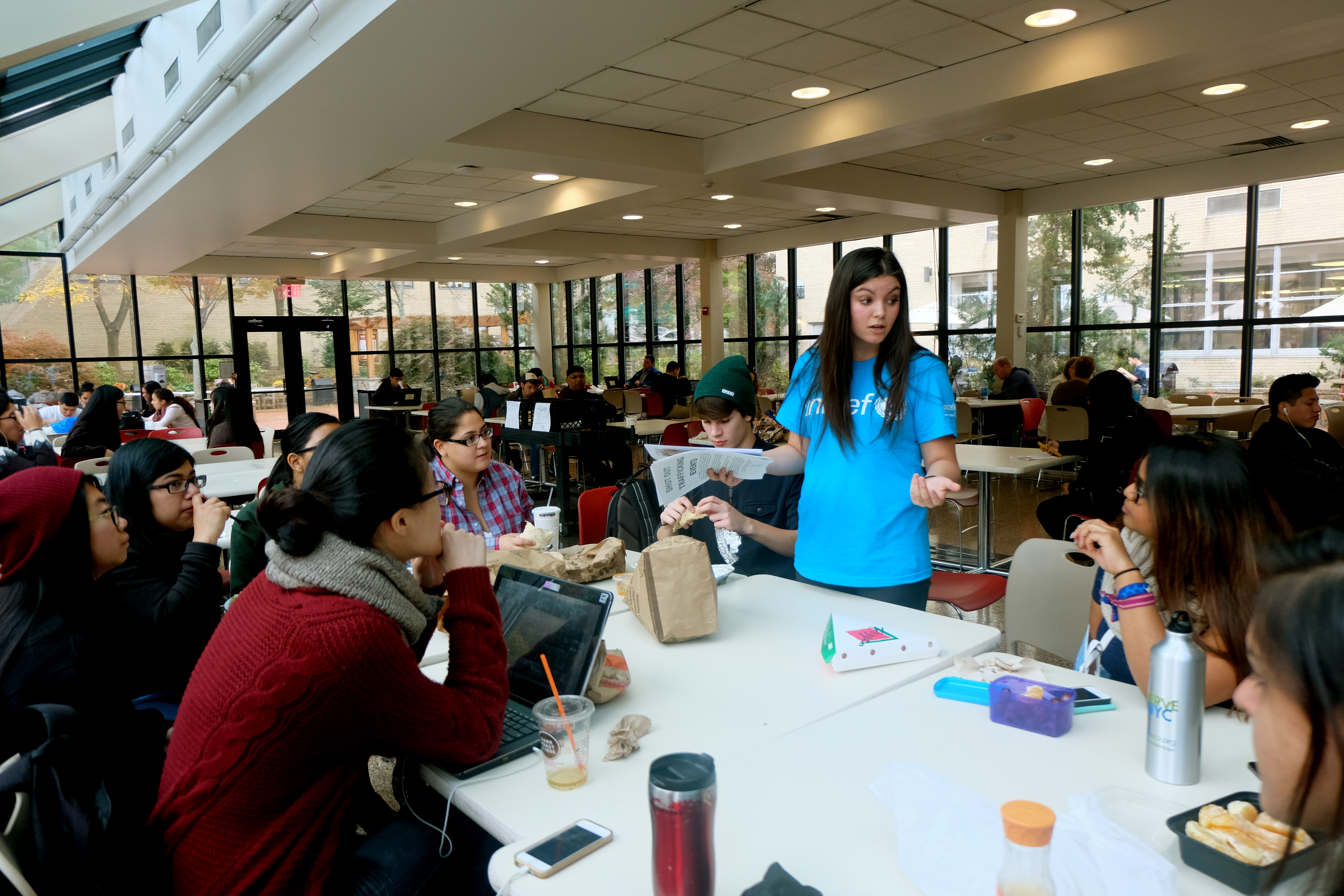 Midway through the week, St. John’s hosted a film screening of the documentary, Not My Life, followed by a panel discussion. The hour-long film provided a holistic picture of what human trafficking looks like around the world. The panelists shared their responses to the film and eloquently answered questions from students, staff, and community members in the audience. Panelists included Malea Otranto, End Trafficking Fellow at the U.S. Fund for UNICEF, and Esq. Jennifer Baum, a Senior Vincentian Research Fellow and associate professor at St. John’s University Law School.

Shut Out Trafficking at St. John’s University engaged nearly 1,000 students, staff, and faculty over the course of the week. Many of these individuals were impacted by what they learned, and have become motivated to take action to help end trafficking. Below is one student’s reflection on the film screening and panel discussion that he attended:

Slowly the words human trafficking is slavery appear on the screen right in front of me. Walking into the screening of Not My Life, a documentary on human trafficking, I did not quite know what to expect. Would this video educate me about the subject and inspire me to take action, or would it simply give me some background and awareness to maybe learn more? After listening to the stories, I can say I am inspired to take action and am more educated about the injustices associated with human trafficking.

I was astounded at the many stories the movie told about the sex trafficking industry. The story which hit closest to home was the story of Angie. Angie is an American girl from the Midwest who was abducted and forced into prostitution. She recounted her story in front of the camera with tears in her eyes, tears I can never even begin to empathize with.

After watching Not My Life, my world was turned upside down. I could not believe I went day to day without knowing the terrible suffering and atrocities people have to go through each and every day around the world and right here in the United States. I specifically remember one number which caught my eye during the film, over 100,000 girls in the U.S. are trafficked for sex. After I heard the statistic my mouth dropped and all I could do was shake my head at how little I knew about human trafficking. “Something as inhumane like human trafficking cannot happen in the United States,” I used to think, “there’s no way I’m living in a country that prides itself in freedom, and yet there is something as rampant as sex trafficking right in my backyard.” Unfortunately, I could not have been more wrong. Human trafficking has been reported in almost every country around the world and in ALL 50 states

This video had me questioning what I really knew about the things that were going on in the world. It influenced me tremendously to the point where I am looking for summer work opportunities to work on the issue. I implore you to watch this video, and hopefully the strength of this film will have the same impact on you as it did on me.